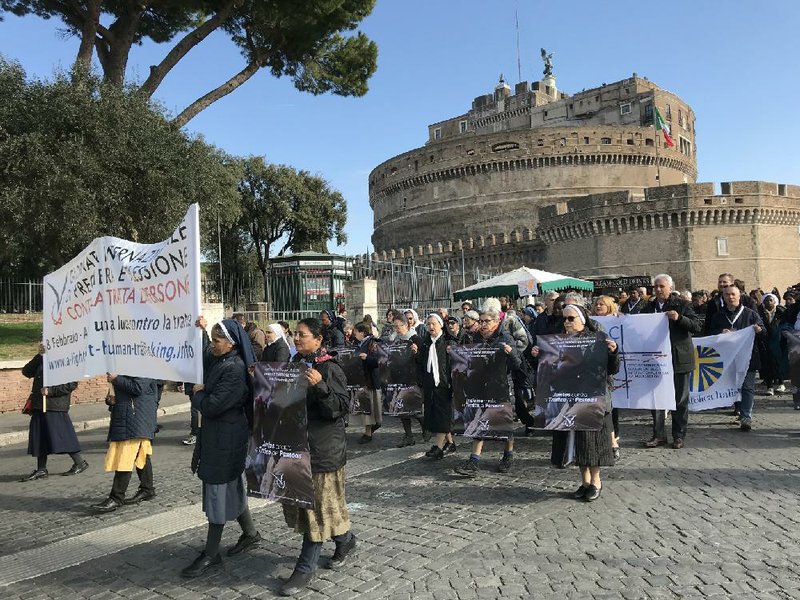 Nuns march through Vatican City to draw attention to the Roman Catholic Church’s efforts to fight human trafficking on Sunday to mark the sixth annual international day of prayer and awareness against human trafficking. (The New York Times/Elizabetta Povoledo)

VATICAN CITY -- For years, nuns around the world have worked to help trafficked and enslaved people break free from the conditions that ensnare millions of men, women and children.

They have prayed for them, and they have offered hospitality. On Sunday, they marched on St. Peter's Square for them.

"There have never been as many slaves in the world as there are today," Sister Gabriella Bottani, the international coordinator of Talitha Kum, a global network of nuns that assists trafficked persons, said in kicking off the march. "Only together we can break the chain of trafficking and slavery."

Dozens of nuns, laypeople and a smattering of priests walked along the broad avenue that links the Castel Sant'Angelo to St. Peter's Square, but Bottani said that several women who had been trafficked decided at the last minute not to join.

"They don't want to be identified," she said.

The march was part of the sixth World Day of Prayer, Reflection and Action against Human Trafficking, which takes place each year on Feb. 8, the feast of St. Josephine Bakhita, a Sudanese nun who has become the symbol of the Roman Catholic Church's commitment to fight human trafficking.

Addressing the faithful gathered in St. Peter's Square for the Angelus prayer and blessing, Pope Francis described trafficking as a "real plague that exploits the weakest" and said that fighting it required a unified commitment.

He also warned that as criminal organizations increasingly used social media to target potential victims, people should "be educated" to use these more "healthily," while social networking services should be held accountable for the content of their sites.

From the start of his papacy, Francis has spoken out on behalf of the millions of men, women and children who are trafficked and enslaved. He has called human trafficking a "scourge" and an "open wound." And he has said that trafficking is "a global phenomenon that exceeds the competence of any one community or country."

The International Labor Organization estimates that almost 25 million people are in forced labor worldwide, and about one-fifth of those are in forced sexual exploitation.

Its diversity was evident Sunday as nuns from all over the world joined the march.

"It's a difficult issue because it's so caught up with poverty," Mayra Cuellar, a nun from Bolivia, said of sexual exploitation. "It's really a plague."

Maria Das Dores Paz, a nun with the Benedictine Sisters of Divine Providence, which offers assistance to trafficked children and women in Brazil, said, "It's a big problem that's often hidden. We try to help, but it's often not enough because a lot depends on the family."

"The fight against human trafficking has been the patrimony of the church for many years, but with Pope Francis, it became central, as he has chosen it as one of the main themes of his pontificate," Bottani said Sunday. The march, she said, was one way of getting people to take notice.

The day before, the sisters tried another route: social media. Their hashtag #PrayAgainstTrafficking became a trending topic in Italy, sharing a top spot with the hashtag of the country's most-watched TV music event. Even the pope used the hashtag twice.

Francis also met with some of the sisters Saturday to activate a new initiative for Talitha Kum: a fundraising program called Super Nuns. The project involves street artists and comic book artists who create new pieces focused on the nuns' work with trafficked women.

"We are calling them Super Nuns because what they do is extraordinary work -- very hidden work, quite dangerous work at times," Sister Patricia Murray, secretary of the International Union of Superiors General, told Vatican Radio on Feb. 8.

The first image, by Steve Powers, better known as the artist ESPO, was installed last month on a wall in New York, Bottani said.

"We wanted to find a new way of speaking about trafficking that would resonate," she said.