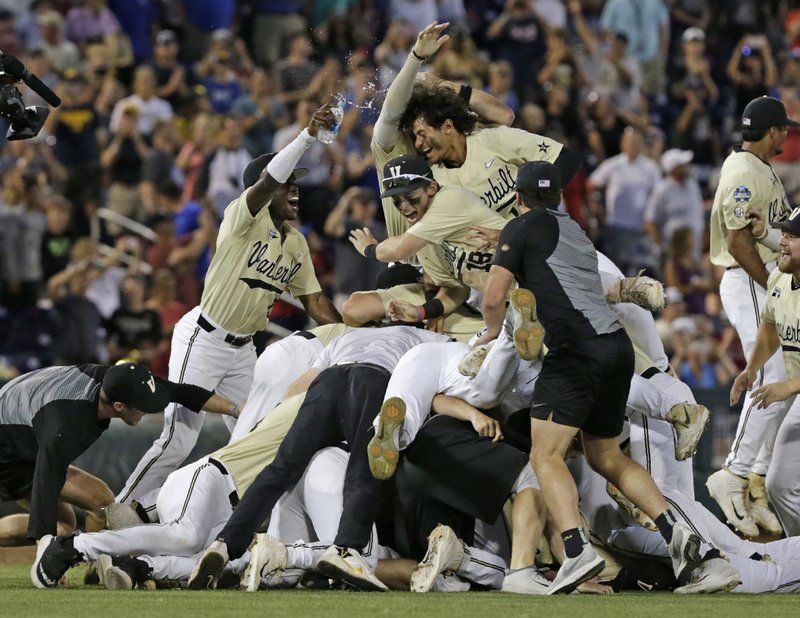 With almost all of its pitching staff back from the team that made the program's deepest postseason run, Louisville begins the season today ranked No. 1 in three of the six major polls.

Defending national champion Vanderbilt lost six everyday players but is atop the other polls largely because it returns possible No. 1 draft pick Austin Martin and postseason pitching sensation Kumar Rocker.

"When six of your top eight arms come back and you finish third in the country, and with good position players, you feel like, OK, we're probably going to be ranked pretty high this year," McDonnell said. "We tried to prepare for the kids before Christmas as to what the rest of the country will think about us. You have to be mature in how you handle that."

Reid Detmers, the 2019 Atlantic Coast Conference pitcher of the year, Bobby Miller and Luke Smith make up the weekend rotation. Each started games in the College World Series. The Cardinals also have a proven closer in Michael Kirian.

Vanderbilt has two of the college game's biggest names in Martin and Rocker.

Martin played mostly third base last year but is able to play shortstop or even in the outfield. He flirted with .400 last year, finishing at .392, and is in line to join Atlanta Braves shortstop and ex-Vandy star Dansby Swanson as a No. 1 draft pick.

The 6-foot-4, 255-pound Rocker won 12 games as a freshman, struck out 19 while throwing the first no-hitter in the NCAA super regionals and was the CWS Most Outstanding Player. Rocker probably will remain the No. 2 starter, with Mason Hickman (9-0, 2.05 ERA) moving from Sunday to the Friday spot.

Vanderbilt went 59-12, setting a SEC record for victories, and tied the league record with 13 players taken in the draft. Even with a revamped outfield and new starters at first base and shortstop, the Commodores remain the team to beat.

"You put this 'V' star on your chest," Martin said, "you're going to have a target on your back. That's a given. Everybody wants to beat Vanderbilt regardless of what happened last year. That's just the mentality everybody has."

No drop-off is expected by one of the top offensive teams in the nation. The Sun Devils batted .310, hit 94 homers and averaged better than eight runs a game. Spencer Torkelson has gone deep 48 times the past two years and has a strong supporting cast. The Pac-12 favorites brought in a top-10 recruiting class.

The Titans locked up coach Rick Vanderhook through 2024 before last season and then missed the NCAA Tournament for the first time since 1992 and failed to win 30 games for the first time in the program's 45-year history. Vanderhook has reconfigured his coaching staff to lead what will be a young team. The Titans are the the preseason Big West favorites.

Mike Martin Jr. takes over for his father, the all-time wins leader in college baseball, and will field a team that brings back five position players, two starting pitchers and three relievers who appeared in the CWS. Reese Albert, who hit nine homers despite missing 18 games because of injury, will be counted on to bolster the offense. Ten-game winner CJ Van Eyk is the ace of a strong pitching staff.

The Gators won their fewest games since 2013 and didn't make the CWS for the first time since 2014. SEC coaches nonetheless picked the Gators to finish second in the conference. The spotlight will be on starters Tommy Mace and Jack Leftwich -- poster boys for Florida's struggles on the mound (5.37 ERA) -- and prized freshman left-hander Hunter Barco. Six everyday players are back from an offense that has pop.

The Bulldogs will go as far as their starting pitchers take them. Emerson Hancock's 1.99 ERA was the best by a Georgia starter since 1977. Cole Wilcox got better as his freshman season progressed. In SEC play, he went 3-1 with a 2.57 ERA and .188 opponent batting average. With the top three hitters gone, offense is the biggest question.

The Hurricanes made an NCAA regional for the first time since 2016 and are looking to go farther in Gino DiMare's second year. The main contributors from a potent offense are back. Alex Toral hit 24 of Miami's 85 homers. Fifth-year senior Brian Van Belle won 10 games and anchors the pitching staff. The Canes also are excited about No. 2 starter Chris McMahon.

The Wolverines were the feel-good story of 2019. They made it to the CWS finals in their first trip to Omaha since 1984 and their runner-up finish was their best since the 1962 team won the national title. Erik Bakich's club lost a couple big bats, but much is expected from Jordan Nwogu and Jack Blomgren, among others. Jeff Criswell will be the No. 1 starter, and Willie Weiss is back as the closer.

The buzz around the Cowboys is about the newcomers. The recruiting class was ranked as high as No. 3, Kaden Polcovich is Big 12 preseason newcomer of the year and Bryce Osmond is preseason freshman of the year. The switch-hitting Polcovich hit 12 homers at Northwest Florida State and is projected to start at second base. Osmond is in line to be the Cowboys' No. 2 starter.

Tim Tadlock has coached four of his past six teams to the College World Series, with the 2019 Red Raiders making it to the final four. Tech is ranked as high as No. 3 and favored to win the Big 12. Dylan Neuse, Brian Klein and Braxton Fulford are the core of an everyday lineup that should be potent again despite losing a couple sluggers. John McMillon, Micah Dallas and Clayton Beeter headline the pitching staff.

The defending Pac-12 champion Bruins set school records with 52 wins overall and 24 conference wins. They also were the No. 1 national seed in the NCAA Tournament, losing a thrilling super regional at home to CWS runner-up Michigan. There's plenty of returning talent, led by All-American Garrett Mitchell and the nation's top closer in Holden Powell, and a recruiting class ranked among the top five.