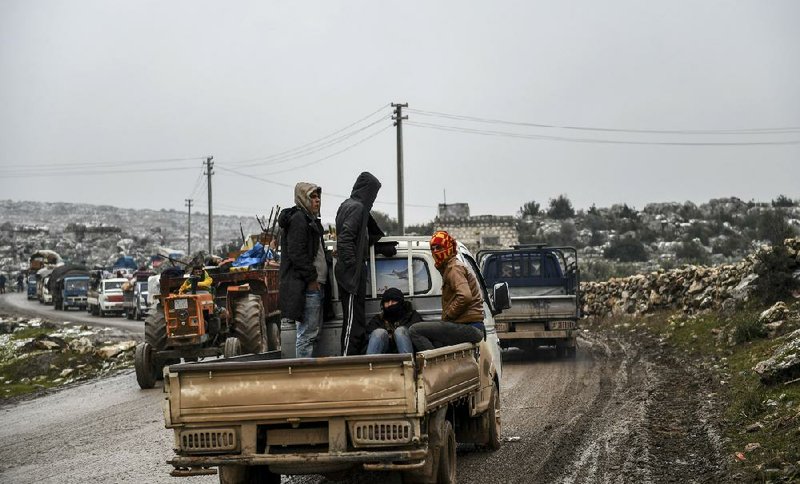 BEIRUT -- More than 140,000 Syrians have been displaced in the past three days by violence in the country's northwest, bringing the total of those uprooted in a Syrian government offensive against the last opposition stronghold to more than 800,000, the United Nations said Thursday.

The government offensive, backed by Russia, has intensified and expanded to include southern and eastern Idlib province, as well as southern and western Aleppo.

On Thursday, government troops continued to advance through the Aleppo countryside to secure their hold on the M5 highway. Most of the villages and towns that sit alongside the highway are now empty.

Also Thursday, the U.S. military acknowledged that its troops fired on and killed a Syrian combatant when government supporters attacked an American convoy in northeastern Syria a day earlier.

A convoy of U.S. armored vehicles drove into a government-controlled area and was attacked by pro-government supporters, including armed men who fired at the soldiers and pelted them with stones and Molotov cocktails.

The U.S. Navy boarded a boat in the Persian Gulf region and seized anti-tank missiles and three surface-to-air missiles that it said were of Iranian origin and destined for rebel fighters in Yemen.

Sailors from the USS Normandy boarded the boat on Feb. 9 and seized "150 'Dehlavieh' anti-tank guided missiles, which are Iranian-manufactured copies of Russian" missiles, according to a statement Thursday from U.S. Central Command.

"Other weapons components seized aboard the dhow [boat] were of Iranian design and manufacture and included three Iranian surface-to-air missiles, Iranian thermal imaging weapon scopes and Iranian components for unmanned aerial and surface vessels, as well as other munitions and advanced weapons parts," according to the statement, which didn't disclose the location of the confrontation.

The seizure comes as tensions in the region remain high after the U.S. killed a top Iranian general in Iraq last month, and Tehran responded by firing a barrage of missiles at two American bases in Iraq.

The Navy said in the statement that the weapons captured were similar to those seized in a November 2019 operation that were also "determined to be of Iranian origin and assessed to be destined for the Houthis in Yemen, which would be in violation of a UN Security Council Resolution that prohibits the direct or indirect supply, sale, or transfer of weapons to the Houthis."

CARACAS, Venezuela -- The government of President Nicolas Maduro demanded that Washington stop piling on financial sanctions aimed at forcing a regime change in Venezuela as it took its case to the International Criminal Court on Thursday.

Maduro's top diplomat accused the Trump administration of causing suffering and death among millions of Venezuelans in the past several years.

The White House was the first of nearly 60 nations to recognize opposition leader Juan Guaido as the country's legitimate president. They argue that Maduro's reelection in 2018 was invalid in part because the most popular opposition politicians were barred from participating.

The Trump administration first hit Venezuela's state-run oil company with sanctions aiming to cut off Maduro's government from a source of wealth. It followed by putting dozens of Venezuelans in Maduro's inner circle on its sanctions list -- including Maduro. Any of their U.S. assets were frozen, and U.S. citizens are banned from doing business with them.

Most recently, it targeted a fleet of 40 commercial planes of the Venezuelan state-run airline CONVIASA. U.S. Treasury officials say "corrupt regime officials" in Maduro's government use the planes.

BAGHDAD -- Hundreds of Iraqi women took to the streets of central Baghdad and southern Iraq on Thursday in defiance of a radical cleric's calls for gender segregation at anti-government protest sites.

An anti-government protest movement began Oct. 1 to decry rampant corruption, poor services and unemployment in Baghdad and Iraq's predominantly Shiite south. More than 500 have died since then under fire from security forces. The protests have been unique because they have drawn men and women who have camped out alongside each other in protest squares.

Influential Shiite cleric Muqtada al-Sadr, leader of Parliament's Saeroon bloc, issued an 18-point code of conduct Sunday for protesters in which he cautioned against the mixing of men and women at sit-in areas.

In response Thursday, women flooded the streets of Baghdad and the southern city of Nasiriyah.

Before the march, al-Sadr warned that Iraq must not "turn into Chicago," equating the U.S. city with "immorality." 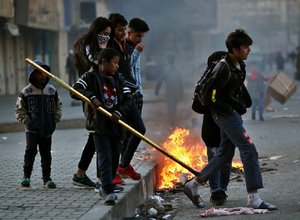