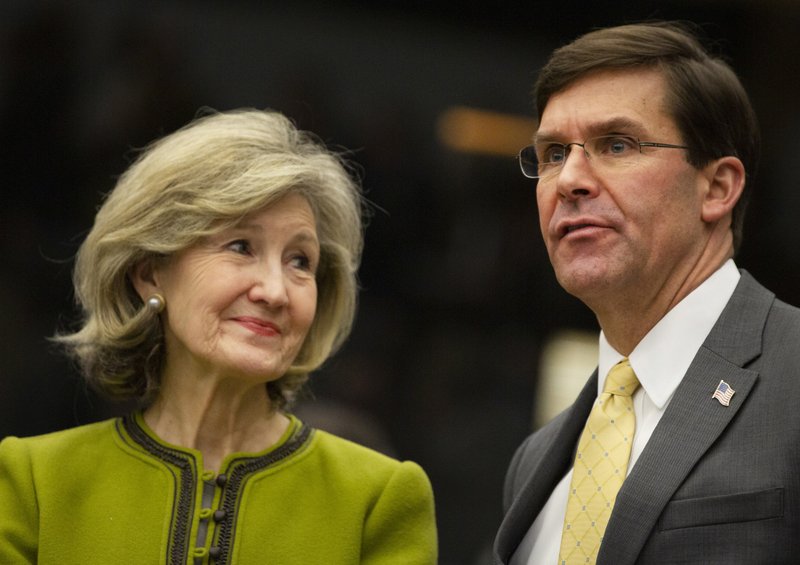 U.S. Secretary for Defense Mark Esper, right, speaks with U.S. Ambassador to NATO Kay Bailey Hutchison during a meeting of the Resolute Support Mission at NATO headquarters in Brussels, Thursday, Feb. 13, 2020. NATO ministers, in a second day of meetings, will discuss building stability in the Middle East, the Alliance's support for Afghanistan and challenges posed by Russia's missile systems. (AP Photo/Virginia Mayo)

BRUSSELS -- China and its military sit atop U.S. Defense Secretary Mark Esper's list of international security worries, but in Europe a bigger concern is Russia.

China was not on the formal agenda when Esper met with allies at NATO headquarters Wednesday and Thursday, but he made a point of publicly expressing American concerns.

"I've raised it every time I've been here, about the 'great power' competition with China and Russia -- but China in particular," he told reporters.

NATO's emphasis on Russia over China reflects the alliance's 71-year history. Throughout that time, it has been focused mainly on Russia and the former Soviet Union.

The Trump administration, meanwhile, sees Europe as slow to respond to threats posed by China. It worries that China's economic engine is driving it to greater international influence, not just on the military front but also in global trade, in space and in technological advances. Russia, by contrast, is seen by the U.S. administration as a second-rate power.

"Candidly speaking, the Chinese are better prepared to have an arms race and to do what they want than the Russians ever were," O'Brien said at the Atlantic Council this week.

Secretary of State Mike Pompeo delivered his own beware-of-China message during a recent trip to Europe and Central Asia. He denounced China's human rights record, criticized its aggressive trade practices and urged his hosts to be wary of Chinese investment and influence.

Esper told reporters Thursday that "NATO allies must carefully consider the long-term risks of the economic and commercial choices they make."

"At the end of the day, Chinese telecom firms have a legal obligation to provide 'technical support and assistance' to the Communist Party, and that concerns us deeply," he said.

NATO hasn't completely ignored China. In December, for the first time, NATO leaders agreed they must as a group consider the implications for their security of China's rise to economic and military prominence.

"We recognize that China's growing influence and international policies present both opportunities and challenges that we need to address together as an alliance," the leaders said in a statement.

In his review of Wednesday's first rounds of discussions among defense ministers, NATO Secretary-General Jens Stoltenberg said they had agreed to explore what more the alliance can do to combat extremists in the Mideast and North Africa. They also discussed the war in Afghanistan.

He made no mention of China.

Information for this article was contributed by Lorne Cook of The Associated Press.