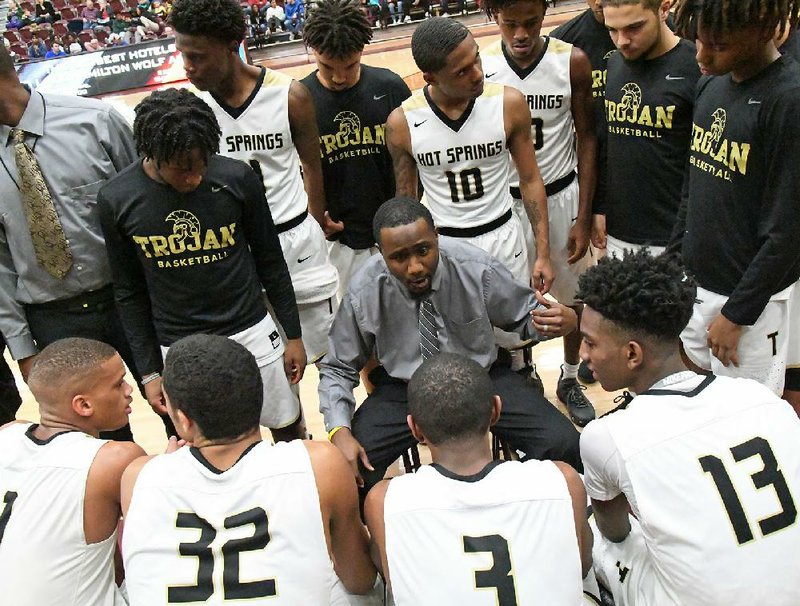 Hot Springs boys Coach Ant Lasker, shown talking with his team during last season’s Class 5A state tournament, has led this season’s team to 17 consecutive victories, including a 10-0 mark in the 5A-South. (Sentinel-Record file photo)

The tactics that Hot Springs boys Coach Ant Lasker sometimes uses to get his team motivated may not be conventional, but they have been effective.

"Sometimes you may just have to walk in the locker room and just snap over the smallest thing," he said. "You've got to keep them on their toes. It's the hardest thing to keep 15- to 18-year-olds focused. It's a difficult task because you've got people telling them how good they are and things of that nature.

"But after a while, kids get to feeling their praise a little too much."

Lasker has certainly stayed on top of the Trojans, who went through an early season funk only to become the hottest team in Class 5A. Hot Springs (20-5) has won its past 17 games, dominating 5A-South competition in a way that forces Lasker to up the ante when it comes to guarding against complacency.

"Sometimes, they may forget what it was like to be 3-5 and how hungry they were," said Lasker, whose team has won its 10 conference games by an average of nearly 25 points. "It's our job as coaches to get them to remember and understand that we need the hunger and dedication from those same guys that were still trying to prove themselves. I still think we're a little overlooked.

"But we stay on them because we can easily go back to being that team that was struggling if we stop doing the things that helped us get to the point where we're currently at."

The Trojans dropped three of their first four games, then split their next four, including a 68-62 loss to Pine Bluff on Dec. 12. But Hot Springs hasn't lost since.

The Trojans remain the only team from the state to defeat top-ranked North Little Rock. They also went through an impressive six-game run through Texas over the Christmas break and have blown through league competition. Junior guards Caleb Campbell and Jadyn Walker have been leading the way for Hot Springs, while seniors Kaleb Hughley and Santiar Thomas have provided stability and consistency, but Lasker said getting sophomore Jabari West back has made his team even more dangerous.

"That was huge," Lasker said of the return of his 6-8 center. "A lot of those games, we got outrebounded. And I just believe that had we had him, that wouldn't have been the case necessarily. I'm not saying we would've won those games, but things could've been different.

"And then getting Campbell and J.J. [Walker] to understand that we need them to score, but we also need them to get their teammates involved. They've been receptive to that."

Hot Springs still has four regular-season games remaining in its attempt to finish undefeated in conference play for the first time since 2016. The bigger picture, however, revolves around being the only Class 5A team left standing in March.

"Winning a conference title is cool, but our ultimate goal is a state championship," Lasker said. "At the end of the day, if we get in the state tournament and lose in the first round, then what was all of the hard work and dedication for? So we make sure these guys stay hungry."

In a two-day span, Southside Batesville girls Coach Jordan Riley got to experience the best of both worlds.

Riley welcomed his first child, a baby boy, on Monday morning, and then on Tuesday night, the 30-year-old led the Lady Southerners to a share of the 4A-3 title after they beat rival and defending Class 4A champion Batesville 60-51.

"I'm really proud for the kids because they work extremely hard," said Riley, who is in his first season at the school after previously serving as head coach at Two Rivers. "We have at least five girls that stay after practice every single day, which really isn't that common in girls basketball. That win was well deserved, and I was really happy that they got it."

The Lady Southerners, ranked No. 6 in Class 4A by the Arkansas Democrat-Gazette, nearly won at 4A No. 1 Batesville on Jan. 14 but couldn't hold on to a lead late. In the return match, they were able to stave off a final rally to hand the Pioneers only their second loss of the season.

Riley, whose dad Alvin is the head girls coach at Vilonia, said offensive consistency and abiding by a possession-by-possession approach on defense have been the key to his team's success

"Playing with maximum effort, doing the little things like blocking out and rebounding, knowing the scouting reports ... that's been big for us," he said. "They've done a good job of buying in to what we've been selling, it's given them a chance to win just about every night."

Southside Batesville (21-4), which has won eight games in a row, hosts next week's conference tournament. The Lady Southerners will be the top seed and won't play until the semifinals on Thursday. 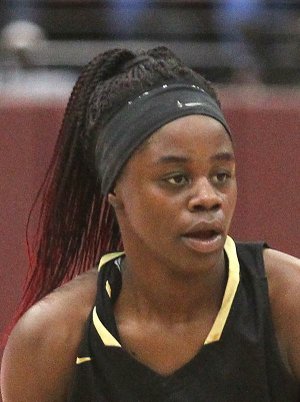 A rough stretch in January saw the Hot Springs Lady Trojans lose three games at the Kameron Hale Invitational by a combined 56 points, but Josh Smith's group has turned a corner of sorts behind the play of guard Jaylia Reed.

The Lady Trojans are tied with Hot Springs Lakeside for second in the conference and play first-place Lake Hamilton tonight.