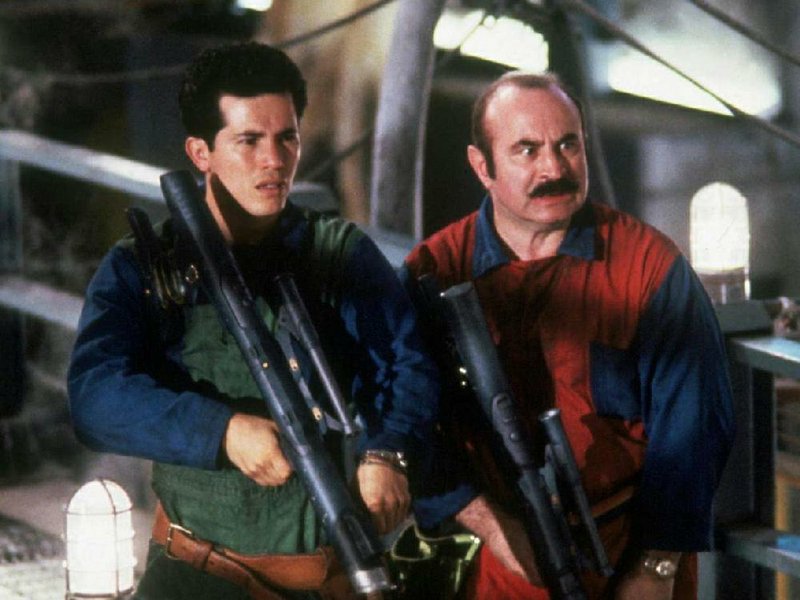 John Leguizamo and Bob Hoskins star in 1993’s Super Mario Bros, the bad video game movie that started it all.

Hollywood studios finally seem to have making movies out of comic books down to a science. Unfortunately, the same isn't true for films adapted from video games. That genre remains filled with hot steaming garbage. And tonight Paramount Pictures is ready to take another shot with Sonic the Hedgehog.

Video game movies have such a disappointing history, and that's coming from a girl who loves cinema and video games. The movies rarely turn out good, but Hollywood keeps producing them because a few actually make money. It's the same strategy Disney has taken with its live-action remakes. Now the House of Mouse is remaking Bambi?

Movies adapted from video games typically fall into three categories: surprisingly good, tame and utter garbage. Most adaptations fall into the final category. Some fall into the middle category. And I can count on one hand the number that rank in the top category.

Mario may just be the most recognizable face from the video game industry. Kids in 1981 knew him. Kids today know him. His popularity has only grown over the last few decades. So making a movie about his, Luigi's, and Peach's story should be easy enough, right? By 1993, film executives had several games of material to pull from.

And yet, what we got was the most incomprehensible story and characters. So many times during the movie I slapped my forehead and screamed, "Why did you do that?!" That seems to be the constant theme with video game movies in the utter garbage category. Scriptwriters have an established narrative and characters across a handful of games to pull from, and they... just don't, for whatever reason.

I don't know if it's studio interference or scriptwriters thinking they can do better than the material they've been handed. But for whatever reason, video game movies often take inexplicable detours from established material. And then they crash and burn.

Mortal Kombat belongs in the exact same trash pile as Super Mario Bros., the difference being it had a surprisingly solid theme song and made $122 million on an $18 million budget. Mortal Kombat also introduces another aspect of the trashy video game movies conversation: director Paul W.S. Anderson.

He's responsible for inflicting the Resident Evil film franchise on the world ... all six of them. Not one of those movies is any good, and if there's a video game franchise that has tons of great material for film adaptation, it's Resident Evil. An evil corporation that unleashes a zombie virus on the planet? Interesting characters like Chris, Leon, Jill and more? It's a ready-made movie. Just add water. But nothing we got from Mr. Anderson was good.

Together with director Uwe Boll (responsible for awful movies such as BloodRayne, Far Cry and more), Anderson has seemingly set out to make sure decent video game adaptations don't exist. And so far, they seem pretty successful in their apparent mission.

What other video game movies would I toss in the garbage? Most of them. House of the Dead, Doom, Alone in the Dark, Hitman, Street Fighter, Dead or Alive, Max Payne and more.

The next category is about as high as most video game adaptations aspire to. It's just tame. If you've seen a few of these movies, you typically know what you're in for. The movie won't be any good, but it might become a guilty pleasure later because you just love the game franchise that much, and this could be your only chance to see it on the big screen.

The perfect example for this whole category is 2010's Prince of Persia: The Sands of Time starring Jake Gyllenhaal. I like Mr. Gyllenhaal. Nightcrawler? Spider-Man: Far from Home? Source Code? [Editor's note: Brokeback Mountain? Zodiac?] He's just a fantastic actor. And if a white guy is going to pull off the role of an acrobatic and charismatic prince from the Middle East, Gyllenhaal is probably going to get the closest to doing OK.

The Prince of Persia: Sands of Time trilogy is one of my favorite video game series. Climbing cliffs, solving puzzles, leaping from wall to wall, rewinding time, it's just a very fun game. The theme of trying to erase mistakes of the past and escape the monsters fate sends after you for abusing time magic captivated me to no end. I keep hoping Ubisoft will revive the franchise if that studio could just stop making Assassin's Creed games for a year or two.

Was the movie adaptation any good? Not really. But people tried their best with what they were given, ya know? Disney sank about $200 million into the production, they got Jerry Bruckheimer to produce it, and Gyllenhaal did his best. That brought the movie up to tame level. It wasn't a dumpster fire, but it was still a video game movie.

Other adaptations I'd put in this category include Rampage, the Tomb Raider franchise, Warcraft, Assassin's Creed and a few more. These are movies that had a solid budget and actors who tried to do what they could. But bad writing inevitably sank the ship and kept them from being good films.

But, the previous 900 words aside, a couple of good video game movies exist. They are unicorns among mules, but they do exist. One pick is obvious. The other not so much.

The obvious good video game movie is Pokémon Detective Pikachu. To date, it's the only American video game film adaptation to dodge a rotten score on Rotten Tomatoes. How did it manage to succeed where all the other movies failed? Several factors.

First, Legendary Pictures chose a popular and highly-beloved franchise everybody recognizes. Pokemon is the highest-grossing media franchise, worth an estimated $95 billion. It's a cornerstone of childhood for all '90s kids and continues to snowball ahead of other franchises like Star Wars and Harry Potter.

Next, Legendary didn't just buy the rights to Pokemon and run wild. It collaborated with The Pokémon Co. to figure out how best to bring these pocket monsters to the big screen. Then the executives went out and snagged one of the biggest names in action comedy: Ryan Reynolds.

Reynolds was essentially given a script that said, "Be Deadpool, but also, be family-friendly and a cute yellow mouse."

On top of all that, Legendary did the impossible and made the pokemon look really good with semi-realistic graphics. The story is bonkers. The characters are wacky. But you know what? They pulled off the only good video game movie to date (not counting Ready Player One or Tron since I'm exclusively writing about films being adapted from existing video game franchises).

The non-obvious pick for a good video game movie is 2006's Silent Hill, which made double its film budget. And while most critics didn't like the movie, I argue it's a pretty solid transition from video game to film. It nailed the visuals of the Silent Hill franchise, from an endlessly foggy and abandoned town to horrific-looking monsters as in the blindfolded-nurse-hallway scene and the pyramid head chase.

It was all lifted straight from the game and put into a horror movie narrative that just worked. Before I saw Detective Pikachu, I maintained that Silent Hill was the only good video game movie in existence. But I make no comments about its sequel.

And now, Sonic the Hedgehog is stepping up to the plate. I have fond memories of playing the game as a child. When I was 6 or 7 , my parents surprised me with a Sega Saturn for Christmas. Well actually, it was from Santa. But here's the deal, it broke on Christmas Day, just a few hours after I started playing it.

I was distraught. Imagine being a little kid, and your main present from Santa breaks. So my father went out to Walmart on Christmas Day and came back with a Sega Genesis for me. And what came with the system? A copy of "Sonic Spinball," which I played for years. I also played the classics, like Sonic 1-3, Tails being my favorite character.

Around the same time, I came to love the Sonic the Hedgehog cartoon (the cool one, not that garbage Adventures of Sonic the Hedgehog BS). As I got older, I moved onto other Sonic games like "3D Blast" and "Sonic Heroes." I moved on to cartoons like Sonic X. So believe me when I say, I do like the franchise. I've invested plenty of my time in it.

The odds are stacked against this movie being any good. But I'll award the crew respect points for one thing: seeing how much everyone hated Sonic's design in the first trailers and posters and taking time to go back and fix him. It resulted in the movie's release being pushed back, but the crew showed big respect for fans, listened to feedback and made the character look more like his video game appearance. Now, trailers almost make the movie look fun.

And that's my greatest hope for Sonic the Hedgehog when I go see it. I want to have fun. I want a by-the-numbers video game movie that skips all the annoying stuff and stays loyal to the source material. What I really want more than anything else is for Jim Carrey to use every bit of strength to summon his 1990s self for Dr. Robotnik. The character is already so over the top and goofy. So channel The Mask, and bring that zaniness to life. If I get all that, I'll be happy.

Sonic the Hedgehog will probably land in the tame category. And if it does, that'll be just fine with me.