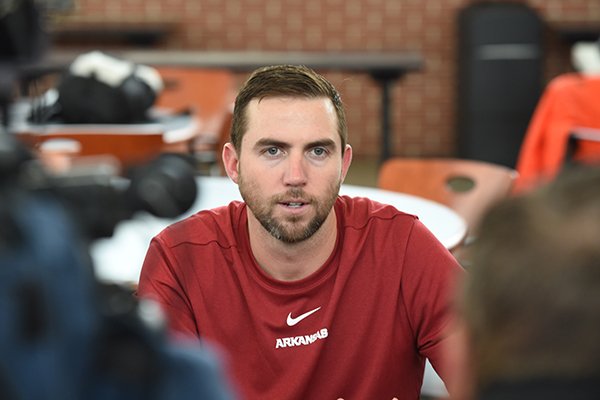 Highly touted junior Jaedon Wilson was one of about 50 junior and sophomore football prospects who visited the University of Arkansas on Feb. 1, and it won't be the receiver's last trip to Fayetteville.

"It was great, I loved the environment and new coaching staff," Wilson said. "How pumped up they were for the next season coming up."

The photo shoot of visitors trying on a Razorback uniform stood out, Wilson said, but meeting the new coaching staff was the highlight of the trip.

"Putting on the jerseys are always fun to do, but I got to say just meeting the new coaching staff," Wilson said. "How energized and hyped up for the next season to get the program turned around."

His older brother Dontre was a highly recruited running back in 2013. He signed with Ohio State but was recruited by Arkansas offensive coordinator Kendal Briles while at Baylor.

Wilson said the visit elevated the Hogs on his list.

"Definitely moved them up my list cause I know the offense that Coach Briles runs," Wilson said. "I grew up watching Corey Coleman, KD Cannon. I think that offense is gonna be something different for the SEC."

He had 28 receptions for 520 yards and 6 touchdowns as a junior. His father Don, mother Angela, sister Skylar and girlfriend Tania Campbell also made the trip.

"He loved it, he's a big fan of Coach Briles," Wilson said. "They recruited my brother hard at Baylor."

Briles' coaching style and offensive philosophy have Wilson excited about the Razorbacks.

"I just think that he definitely understands the players," Wilson said. "I watched the way his guys at Baylor played for him and his dad. I loved the way that ball was in the air most of the game. That's a receiver's dream."

Wilson plans to catch the Hogs in action.