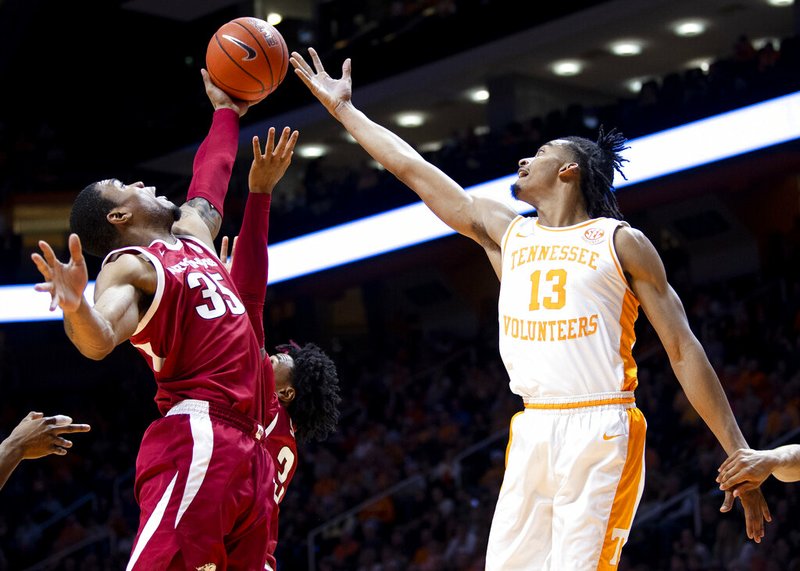 Here are a few things to watch in Southeastern Conference basketball this week:

GAME OF THE WEEKEND

Mississippi State (15-9, 6-5 SEC) at Arkansas (16-8, 4-7): This game features two bubble teams that desperately need a win to boost their NCAA Tournament credentials. Arkansas started out 14-2 this season but has gone 0-3 since second-leading scorer Isaiah Joe underwent arthroscopic debridement surgery on his right knee. The slide includes overtime defeats against Auburn and Missouri, plus a blowout loss at Tennessee. Mississippi State needs to bounce back after getting drubbed 83-58 at Mississippi on Tuesday.

Who might join the SEC's three ranked teams in the NCAA Tournament?: No. 11 Auburn, No. 12 Kentucky and No. 25 LSU all should feel pretty comfortable about their NCAA hopes at this point, but it's tough to figure out which other SEC teams might earn bids. The SEC has plenty of bubble teams, but many of them aren't playing particularly well. We already noted the recent struggles of Arkansas and Mississippi State. Florida (15-9, 7-4) and South Carolina (15-9, 7-4) are tied for fourth in the SEC standings, but the surging Gamecocks are stuck in the mid-60s of the NET rankings that are used as an NCAA Tournament selection evaluation tool. Florida has won three of its last four but lost three straight before that. Alabama (13-11, 5-6) is hovering around the top 40 of the NET rankings, but has a suspect record. Tennessee (14-10, 6-5) is seeking a third straight NCAA bid but is outside the top 60 of the NET.

Four of Auburn's last five games have gone to overtime, including a double-overtime victory over Ole Miss. Auburn came out on top in all four of those overtime contests as part of its current seven-game winning streak. ... Alabama set SEC records for 3-point baskets (22) and 3-point attempts (59) in its 95-91 overtime loss to Auburn on Wednesday. ... Alabama's Kira Lewis Jr. had a triple-double in that Auburn game with 10 points, 10 rebounds and 13 assists. He was the first SEC player to get a triple-double in a loss since Alabama's Roy Rogers did it on Feb. 10, 1996, according to STATS. ... Arkansas' Jimmy Whitt Jr. is a 6-foot-3 guard who is scoring 14.9 points per game this year despite attempting just one 3-point shot all season. He missed the lone 3-point attempt. ... Kentucky's 78-64 victory over Vanderbilt on Tuesday marked the Wildcats' eighth straight win in this series. In five of those games, Kentucky has rallied from a double-digit deficit. ... LSU's Darius Days is shooting just 28.3% from 3-point range but is making a remarkable 73.5% of his attempts from two-point range. Days is shooting 50.5% overall and is coming off a 20-point, 10-rebound performance in an 82-78 triumph over Missouri.

Ole Miss guard Breein Tyree has averaged 33.7 points during the Rebels' current three-game winning streak. Tyree scored 38 points against South Carolina, 23 against Florida and 40 against Mississippi State. The 6-2 senior has shot 11 of 21 from 3-point range and 23 of 26 from the free-throw line during this stretch. Tyree outscored the entire Mississippi State team 27-24 during the second half of Ole Miss' 83-58 victory over the Bulldogs on Tuesday. Tyree is averaging 20 points to rank second in the SEC, behind Arkansas' Mason Jones.

ON THE WOMEN'S SIDE

No. 1 South Carolina's 70-52 rout of No. 5 Connecticut on Monday was the first time the Gamecocks had beaten the Huskies in nine attempts. Tyasha Harris had 19 points, 11 assists and zero turnovers in that game. .... No. 6 Mississippi State beat No. 16 Texas A&M 69-57 on Sunday after trailing 37-26 at halftime, marking the first time the Bulldogs had erased a double-digit halftime deficit to win since a victory over Iowa State on Dec. 3, 2016.