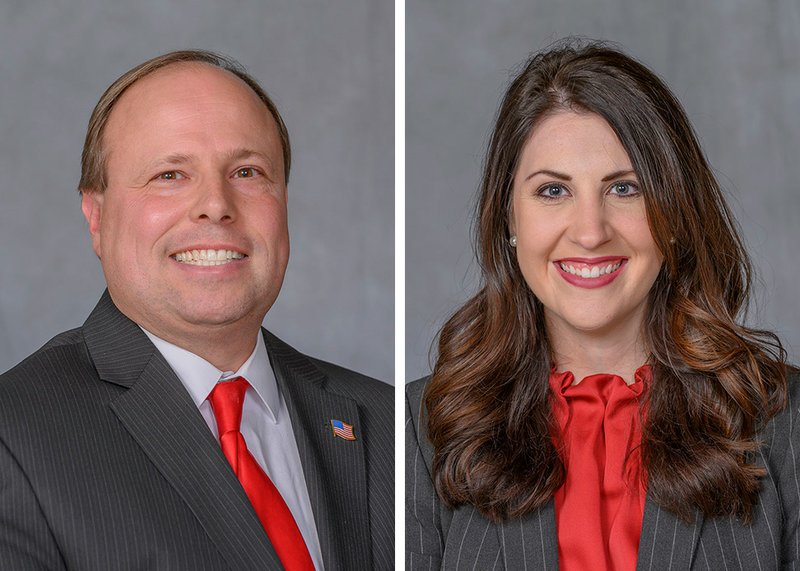 The sales tax extension is part of a plan put on the November ballot by the Legislature and supported by Gov. Asa Hutchinson, a Republican. The plan would make permanent a half-cent sales tax due to expire in 2023.

John P. Carr, a technology consultant, and attorney and business co-owner Adrienne Woods are competing in the March 3 primary. Both live in Rogers and participated in a forum attended by about 40 people and hosted by the Rogers-Lowell Area Chamber of Commerce and the Greater Bentonville chamber. The forum began at 6 p.m. at Northwest Arkansas Community College in Bentonville.

Early voting begins Tuesday. The winner of the Republican district primary will face Democrat Jene Huffman-Gilreath of Rogers in the Nov. 3 general election. Incumbent Rep. Rebecca Petty, R-Rogers, isn't seeking reelection and has endorsed Carr. Both Carr and Woods pledged to support the Republican nominee in the race.

Carr opposed the tax extension on the principle there was enough tax money already and he, with his experience, could find ways to make government more efficient so money could be reallocated to highways. Woods also said taxpayers shoulder enough of a tax burden and shouldn't pay more.

Both candidates said they would oppose any effort to repeal a state law allowing trained concealed carry permit holders to take their guns on to state college and university campuses. Both also expressed an absolute belief life begins at conception and they would be strong advocates for pro-life positions. Woods told the audience her twins were born through in vitro fertilization. "I saw them when they were five days old," she said. The experience steeled her resolve life begins at conception, she said.

Both candidates said the state income tax needs further cutting, as does the sales tax. Woods added there are a multitude of taxes and fees on small businesses that need doing away with altogether.

District 94 extends from New Hope Road on the south to Hudson Road/Southwest 14th Street in the north. Most of the district is east of Interstate 49, except for a part west of I-49 extending to South Walton Boulevard. State House members serve two-year terms and have an annual salary of $41,393.