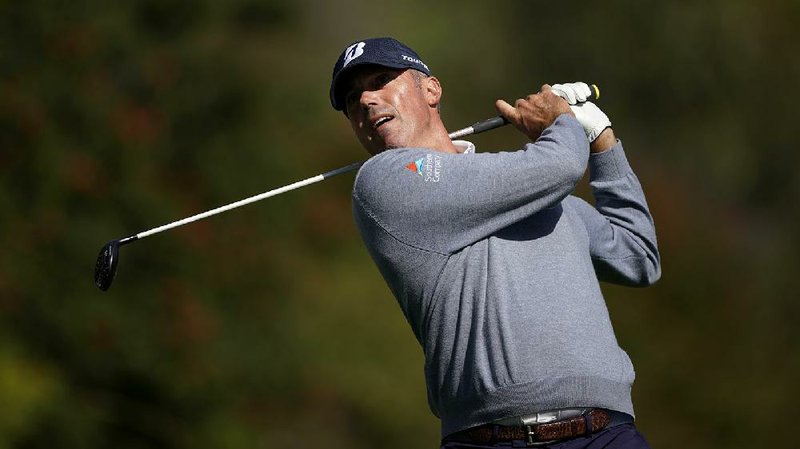 Matt Kuchar shot a 7-under 64 to take the lead at the Genesis Invitational after Thursday’s opening round. (AP/Ryan Kang)

Matt Kuchar drove to the edge of the 10th green and two-putted for birdie and kept right on rolling until he had a 7-under 64 on Thursday, matching his best score at Riviera and giving him a three-shot lead in the Genesis Invitational. So clean was Kuchar's round that he only once had to stress over a par putt, and he made the 10-footer at the par-3 fourth. Tiger Woods was 4 under through eight holes and had to settle for a 69. Andrew Landry (Arkansas Razorbacks) is tied for seventh place after firing a 3-under par 68.

Jodi Ewart Shadoff shot a 7-under 66 to take a three-stroke lead over defending champion Nelly Korda in the first round of the Women's Australian Open on Thursday in Adelaide, Australia. Ewart Shadoff had seven birdies at Royal Adelaide and held a one-stroke lead over Inbee Park and U.S. Open champion Jeongeun Lee6, who had five birdies in a seven-hole stretch in the middle of her round. Marina Alex, Amy Olson and Jillian Hollis (all 68) were tied for fourth. Ewart Shadoff has 20 top-10 finishes on the LPGA Tour without a victory. Stacy Lewis (Razorbacks) is at 3-under 70 while Alana Uriell (Razorbacks) is at -1-under and Maria Fassi (Razorbacks) shot an even-par 73.

The Los Angeles Dodgers agreed to pay Kenta Maeda's $1 million assignment bonus as part of their trade of the pitcher to the Minnesota Twins. Los Angeles also agreed to pay the Twins $3 million to cover part of Maeda's salary and reimburse Minnesota for up to $7 million of his earned bonuses, according to information obtained by The Associated Press.

Tommy Hunter passed his physical and worked out with the Philadelphia Phillies on Wednesday after the right-hander finalized an $850,000, one-year contract. Hunter had surgery last July to repair the flexor tendon in his right arm after pitching in just five games. He had a 3.80 ERA in 64 innings in 2018 and has a 4.08 ERA and 21 saves in 12 seasons.

Free agent Jarrod Dyson finalized a $2 million deal with the Pittsburgh Pirates, who hopes the veteran can fill the void left in center created by Starling Marte's trade to Arizona. The 35-year-old hit .230 with 7 home runs and 27 RBI in 130 games with the Diamondbacks last season. Dyson also stole 30 bases for the fifth time in his 10-year big league career.

Arizona Diamondbacks right-handed pitcher Mike Leake has a fracture on his non-throwing wrist but still hopes to be ready for the beginning of the regular season. Leake, 32, had an MRI on Wednesday, and he said it revealed an old fracture that was aggravated by a fall while he was chasing his dog. Leake is in the final year of an $80 million, five-year deal. He's won 105 career games and won a Gold Glove in 2019.

Brad Miller and the St. Louis Cardinals agreed to a $2 million, one-year contract Wednesday, a deal that includes $500,000 in available performance bonuses. Miller, 30, hit .260 with 13 home runs and 25 RBI last year for Cleveland and Philadelphia. He batted .250 with 1 home run and 4 RBI in 13 games with the Indians before getting released.

The NBA fined Paul George of the Los Angeles Clippers $35,000 on Thursday, two days after the 6-9 forward was critical of the officiating after his team lost to the Philadelphia 76ers. The NBA said George was fined those comments, and noted that the amount of the fine "also reflects his multiple prior violations of the rule prohibiting public criticism of the officiating." This marks at least the fifth time George has been fined in his career for such comments, and this came with the stiffest fine -- topping the $25,000 he was docked on two other occasions. George pointed out the Clippers were called for eight more fouls than Philadelphia n the 76ers' 110-103 win at home, referring to that disparity as "home-court cooking."

Top-seeded John Isner was upset in the second round of the New York Open, losing to Jordan Thompson 7-6 (2), 6-7 (3), 6-3 on Thursday night. Isner, who had a first-round bye, was playing his first match since having to retire from his third-round match at the Australian Open against Stan Wawrinka because of a left foot injury. The hard-serving American was broken early in the third set and unable to do much from there against Thompson, an Australian whom Isner had defeated in all three previous meetings.

Kvitova moves on in Russia

Petra Kvitova advanced to the quarterfinals at the St. Petersburg (Russia) Ladies Trophy by beating Alison van Uytvanck 7-6 (1), 1-6, 6-2 on Thursday. Kvitova saved a set point at 5-4 in the first set and then recovered after being broken in the first game of the decider. She then won six of the next seven games. Kvitova, who was playing for the first time since losing to Ashleigh Barty in the Australian Open quarterfinals last month, advanced to play Ekaterina Alexandrova, who upset seventh-seeded Donna Vekic 6-1, 7-5.