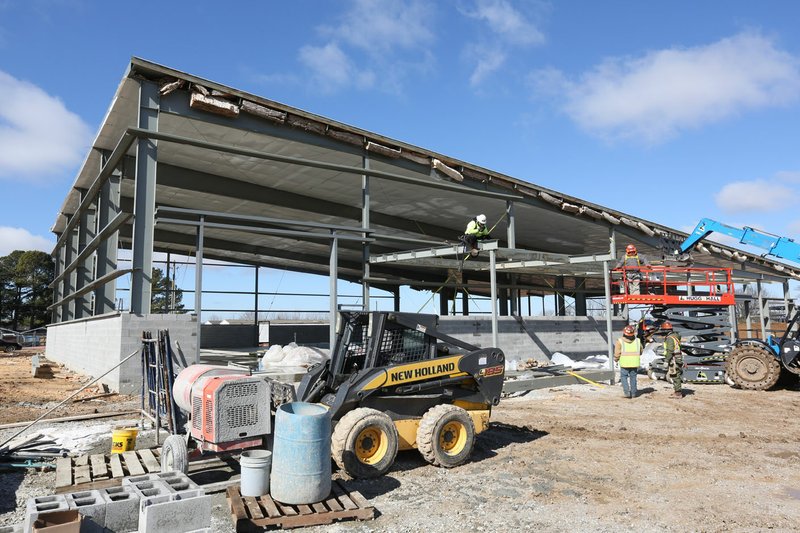 Work continues Thursday at the Northwest Technical Institute campus on a facility dedicated to welding, scheduled to open in the fall. Go to nwaonline.com/200214Daily/ and nwadg.com/photos for a photo gallery. (NWA Democrat-Gazette/David Gottschalk)

SPRINGDALE -- Northwest Technical Institute soon will be home to the nation's largest facility dedicated to an ammonia refrigeration and industrial maintenance program, according to officials.

The school hosted a groundbreaking Thursday for a 20,000-square-foot building to roughly triple the program's space. It will cost about $860,000 to build, said President Blake Robertson.

Northwest Technical Institute is a state-supported school offering programs for high school students and adults in industrial maintenance, diesel technology, nursing and information technology. A five-person board oversees the school.

The building should be mostly finished and ready to use by the fall, according to Samantha Efurd, director of ammonia refrigeration and industrial maintenance.

School, business and community leaders gathered for the groundbreaking on the east side of campus. David Rook, associate director of refrigeration training at Tyson Foods, has served as the chief consultant to the school on the facility's design.

"It's going to be a premier educational facility, so I'm very excited about that," Rook told the crowd.

Public and private entities have provided money to equip the new facility. Gov. Asa Hutchinson allocated $1 million for it in 2018. Tyson also contributed $1 million and has more than $3.5 million in equipment lined up and ready to be installed once the project is complete, Rook said.

[Don't see the gallery above? Click here to see photos from the groundbreaking.]

That equipment is coming from Tyson facilities in places such as Illinois, Mississippi, Georgia and Alabama.

"We'll probably end up having about 10 facilities that have given equipment for this project," Rook said.

Mike Rogers, Tyson's senior director of maintenance and refrigeration, also addressed the crowd. The new facility will attract people from across the nation and even other countries, he said.

The school offers an 11-month diploma program in ammonia refrigeration training students to be an entry-level technician. It has space for 20 students in that program, Efurd said.

But the school also provides training -- sessions lasting anywhere from a couple of days to a week -- for people already in the industry. Employees from companies such as Walmart, Simmons, George's and Cargill receive training there. The new facility will allow the school to increase the number of adult learners it serves from about 120 per year to more than 300 per year, Efurd said.

Brandon Hewitt, 19, enrolled in the ammonia refrigeration and industrial maintenance program last summer, right about the time he started a job in the same industry with Rockline Industries, located just up the road from the school. His experience in the program has been positive.

"I know a lot more now than I did coming in," Hewitt said. "I thought I was pretty smart in the area, and learned quickly that there was a whole lot I didn't know. I've been able to acquire skills and really put them to use." 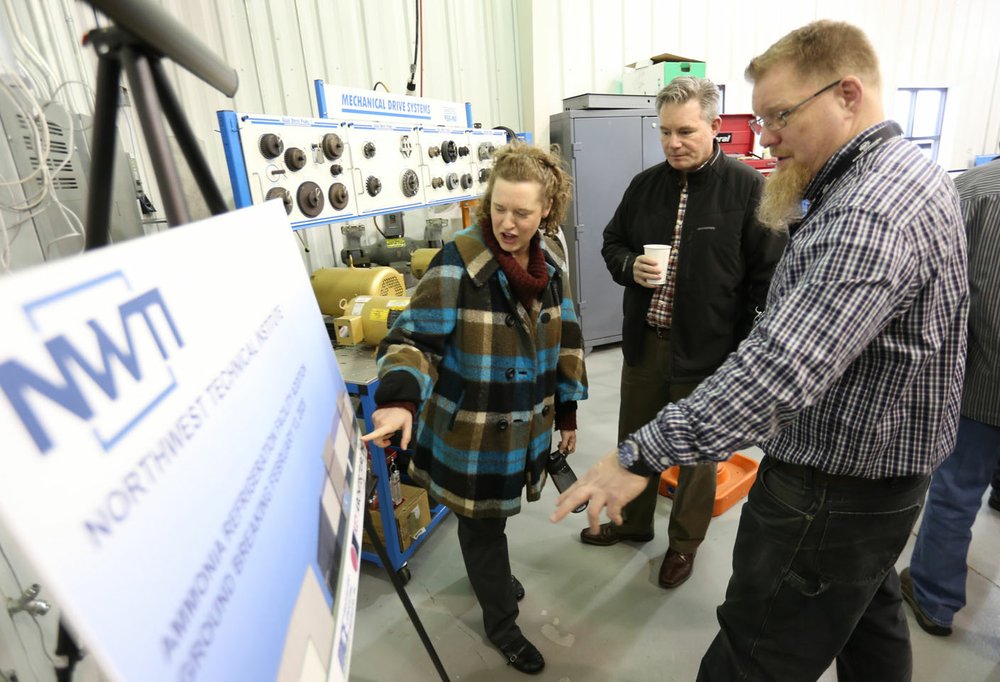 Shane Hall (from right), ammonia refrigerant instructor at Northwest Technical Institute, discusses Thursday with Rhett Hall and his wife, Jessica, an expansion of the ammonia refrigeration, industrial maintenance and boiler operation facility on the campus in Springdale. The school held a groundbreaking for the expansion Thursday. The school is also in the process of building a facility dedicated to welding, which is scheduled to open in the fall. Go to nwaonline.com/200214Daily/ and nwadg.com/photos for a photo gallery. (NWA Democrat-Gazette/David Gottschalk)

Meanwhile, adjacent to the ammonia refrigeration building, the school is building another facility dedicated to its welding program. That 14,000-square-foot project started last summer and is expected to be done this summer at a cost of $2.9 million.

That project will more than double the school's capacity for welding students. Last year, more than 50 people applied to the welding program, but the school could accept only 18, said Mark Mansell, welding department chairman.

Board members at times have expressed concern about whether the school will have enough money to fully equip the new welding facility. Administrators, however, are optimistic that won't be a problem.

The school has applied for a $864,000 grant from the state's Office of Skills Development for welding and fabrication equipment. Stephanie Isaacs, the office's associate deputy director, visited the area Thursday to evaluate the school's needs. She also met with the leaders of two local businesses that hire some of the school's welding students.

Robertson, the school's president, said Isaacs' visit went well. He's confident the office will give the welding program some money; he's just not sure how much, he said.

The school also is seeking a grant through the U.S. Economic Development Administration, an agency within the U.S. Department of Commerce.

The school has some welding equipment already, but ideally would like another $1 million worth of equipment, Robertson said.

"But we could probably make do with about a half a million," he said.