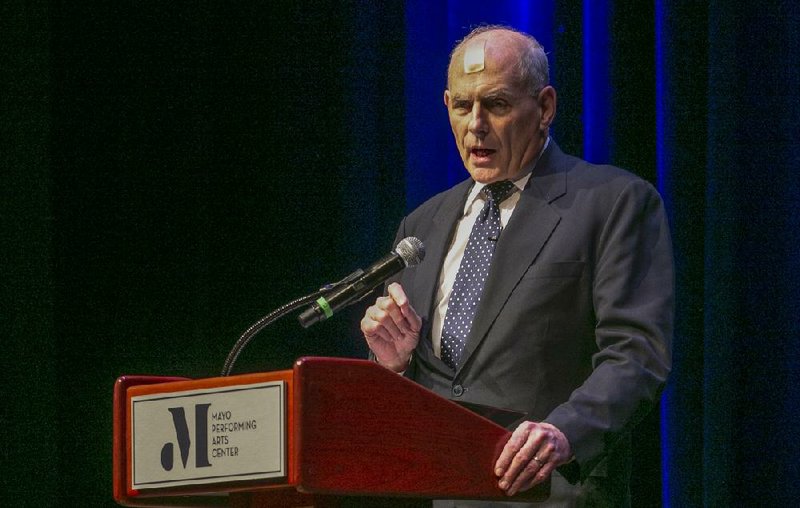 Former White House Chief of Staff John Kelly, speaking at a forum Wednesday in Morristown, N.J., said Lt. Col. Alexander Vindman “did exactly what we teach them to do from cradle to grave” in reporting his concerns about President Donald Trump’s phone call with Ukraine’s president. (AP/Drew University/Karen Mancinelli)

WASHINGTON -- President Donald Trump on Thursday criticized former White House chief of staff John Kelly after he came to the defense of a former national security aide who offered key testimony in the impeachment inquiry.

The president's comments came after Kelly defended Lt. Col. Alexander Vindman, who was among the administration officials who raised concerns about Trump's July phone call with Ukraine's president. That call spurred the president's impeachment trial, which ended in acquittal last week.

"Like so many X's, he misses the action & just can't keep his mouth shut, which he actually has a military and legal obligation to do," Trump tweeted about Kelly. "His incredible wife, Karen, who I have a lot of respect for, once pulled me aside & said strongly that 'John respects you greatly. When we are no longer here, he will only speak well of you.' Wrong!"

Kelly, speaking at a public forum on Wednesday in Morristown, N.J., said that Vindman did exactly as he was trained in raising concerns to his superiors after hearing "questionable" comments from Trump, according to a report by The Atlantic magazine.

"He did exactly what we teach them to do from cradle to grave," said Kelly, a retired Marine general who served as Trump's chief of staff from the summer of 2017 until early last year. "He went and told his boss what he just heard."

The Army officer was ousted from his White House National Security Council job last Friday, just two days after the Senate acquitted Trump on abuse of power and obstruction of Congress charges. He is to be reassigned by the Pentagon. His twin brother, Lt. Col. Yevgeny Vindman, who worked as an ethics lawyer at the council, also was ousted from his job and was reassigned to the Army general counsel's office.

Kelly came to Vindman's defense after Trump suggested this week that the Pentagon should review Vindman's conduct in the Ukraine episode and potentially consider disciplinary action against him.

Trump has insisted that his call to Ukranian President Volodymyr Zelenskiy was "perfect." During the conversation, Trump asked Zelenskiy to do him "a favor" and look into former Vice President Joe Biden and son Hunter's business dealings in Ukraine.

Vindman testified that he raised his concerns inside the White House after concluding that Trump was inappropriately conditioning nearly $400 million in military aid to Ukraine on getting Zelenskiy to announce an investigation of his political rival.

Kelly said at the forum that Vindman's decision to raise his concerns was valid.

"Through the Obama administration up until that phone call, the policy of the U.S. was militarily to support Ukraine in their defensive fight against ... the Russians," Kelly said. "And so, when the president said that continued support would be based on X, that essentially changed. And that's what that guy [Vindman] was most interested in."

Trump initially tapped Kelly after the 2016 election to serve as his secretary of the Department of Homeland Security, before asking him to become his chief of staff. Kelly suggested at the forum he had some hesitation about joining the administration but ultimately decided to at the urging of his wife.

"I frankly think he needs you and people like you," Kelly recalled his wife telling him.

White House press secretary Stephanie Grisham said Thursday she was "disappointed" by Kelly's comments. She compared him to former national security adviser John Bolton, another top aide who was critical of Trump's efforts to pressure Zelenskiy.

"I thought it was a little disingenuous," Grisham said in an interview on Fox News Channel's Fox & Friends. "It's interesting that he's starting to poke his head out a little bit more, just like John Bolton, as we're getting close to an election."

Bolton, according to excerpts of a manuscript leaked to the media during the Senate impeachment trial, said Trump told him he was conditioning the release of military aid to Ukraine on whether its government would help investigate the Bidens.

Bolton defended Kelly in a tweet Thursday, calling him an "honorable man."

"John and I have disagreed at times, as is commonplace at senior government levels, but he has always served his country faithfully," Bolton said. "Conservatives especially have a responsibility to reject baseless attacks upon him."

Kelly did not immediately respond to a request for comment on Thursday.

In the radio interview with Geraldo Rivera, Trump renewed his attacks on Vindman, describing him as "very insubordinate" and claiming that Vindman's colleagues applauded his departure last Friday.

"Vindman was the guy that, when we took him out of the building, the whole building applauded," Trump said. A senior NSC official said later that Trump's description was accurate but did not say he had firsthand knowledge of it.

Information for this article was contributed by Aamer Madhani of The Associated Press; and by Michael D. Shear and Maggie Haberman of The New York Times.