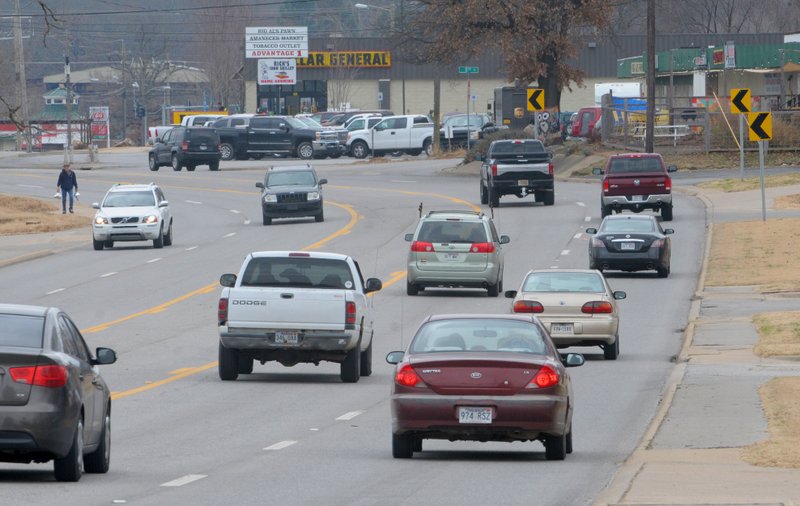 File photo -- Traffic moves on South School Avenue, U.S. 71B, near the intersection of 11th Street in Fayetteville. - Photo by David Gottschalk

A spokesman for the National Weather Service in Tulsa, Okla., said temperatures dropped sharply, which may have contributed to the traffic problems.

Any snow that melted and any moisture remaining on roads and bridges quickly froze. Temperatures continued dropping for the next couple of hours, hitting 26 degrees between 9 and 10 a.m.

There were 36 wrecks reported on Interstate 49 between 5:30 and 9:30 a.m., according to Bill Sadler, spokesman for the Arkansas State Police. Sadler said all of the accidents were in Washington County and on elevated portions of the highway or on approaches to bridges.

Sadler said no serious injuries were reported from any of the wrecks.

Multiple wrecks happened on the Fulbright Expressway, Sadler said. State Police records indicate as many as 10, with most of the drivers choosing to make reports by phone.

A spokesman for Central Emergency Medical Services said ambulances went to 15 accidents between 5:30 a.m. and 9:30 a.m. and all the injuries were minor.

Police said 13 wrecks were reported in the city with no serious injuries.

The Washington County Sheriff's Office posted a warning to drivers about slick roads on its Facebook page at 7:43 a.m. saying seven wrecks were reported.