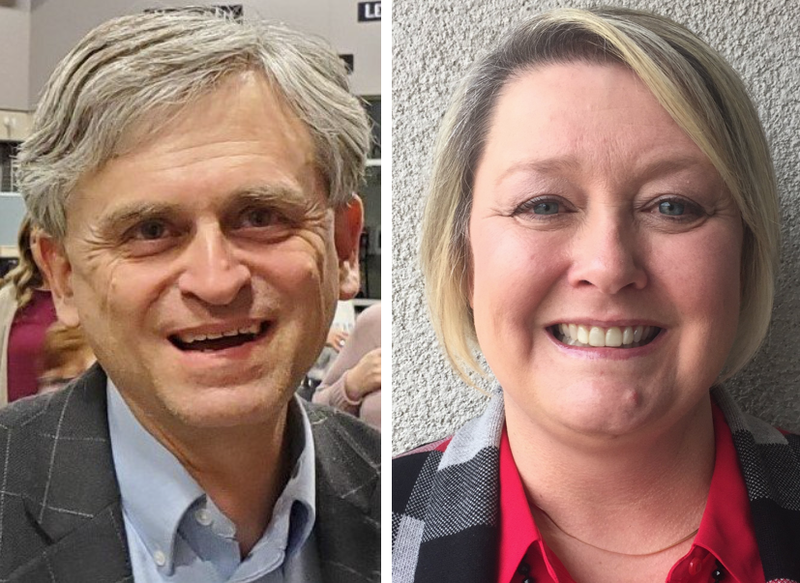 FAYETTEVILLE -- An accountant is challenging a college professor for the School Board's Zone 2 seat.

Robert Maranto, 61, is seeking his second term. He holds the 21st Century chair in leadership in the Department of Education Reform at the University of Arkansas.

Residency: Fayetteville. He has lived in the district since 2008

Employment: 21st Century chair in leadership in the Department of Education Reform at the University of Arkansas

Political experience: Fayetteville School Board since 2015

Residency: Fayetteville. She has lived in the district for 11 years and Northwest Arkansas for 40 years

Tracey Pomeroy, 50, is making her first bid for a public office. The former teacher has spent the past 20 years in accounting.

The winner of the March 3 election earns a five-year term on the seven-member board. Board positions are unpaid. Early voting begins Feb. 18.

Maranto received 63% of the vote in a three-way race to win his first term in 2015. He pointed to several actions he's taken or suggestions he's made he said have made a positive difference for the School District.

"I really stress listening more to teachers and parents," he said.

An example he cited was early in his first term when the board blocked a proposal to move the assistant principals, a plan he said neither teachers nor parents wanted.

He also pushed for the district's five-year plan to include surveying parents and staff members to gauge their morale and better understand what's going on at the school level.

"We really need systematic data for whether parents feel their kids are being served, for whether they feel like school-level staff are working with them to help their kids," he said.

He's also pushed for focusing more on closing achievement gaps and on maintaining the strength of the high school's Advanced Placement program, he said.

Maranto has two kids. One is a recent Fayetteville High School graduate; the other is a sophomore at the high school.

Pomeroy has three children -- a sophomore, eighth-grader and sixth-grader -- all in the School District. She served as the parent-teacher organization president at Happy Hollow Elementary School for two years. She sees the board seat as a chance to get involved in the district at a higher level.

She doesn't have an agenda other than wanting to see the district improve. She believes her financial background will help the board manage an annual budget that exceeds $100 million.

Pomeroy said she thinks the board works well together, and she doesn't criticize any specific decisions it has made. Her main critique is members could try harder to be more visible in the community. She said she didn't know who represented her zone before she filed to run for the seat.

"I've talked to a lot of people who don't really know their board. They don't know who represents them," she said. "I'd like to get out there, be involved in the community, go to PTO meetings and be a voice for people."

She was a teacher for two years in Indiana before transitioning to accounting. Her brief teaching career gave her insight to the needs of both teachers and students, she said.

The board hired and fired former Superintendent Matthew Wendt during Maranto's first term. The board fired Wendt in June 2018, three months after another district employee made a sexual harassment claim against him and more than two months after he was placed on paid leave.

There was a legal process the board had to follow leading up to the termination, which is why it took as long as it did, Maranto said. Pomeroy said it was hard for her to judge the board for how it handled the situation, but she was pleased by the outcome.

Zone 2 makes up the south central part of the district, with East Mission Boulevard as a northern boundary and College Avenue as part of the western boundary.