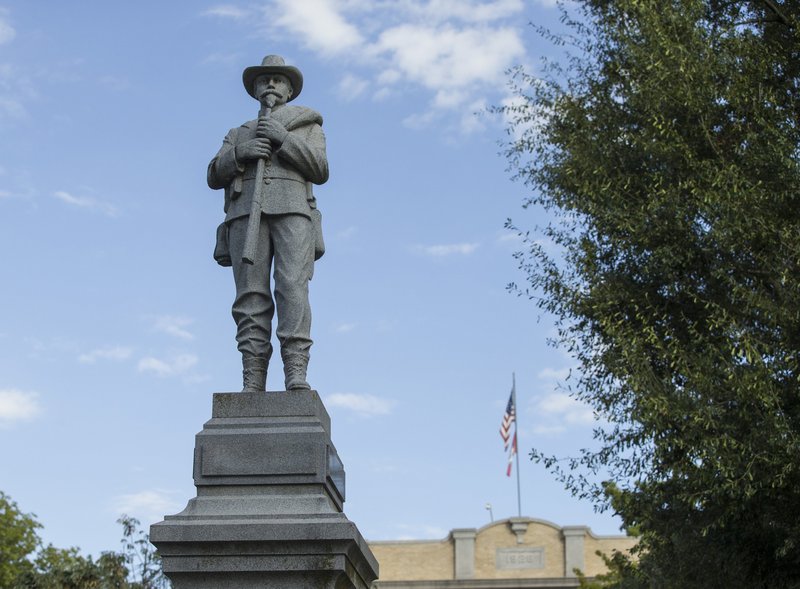 The Confederate soldier monument Wednesday, Sept. 25, 2019, on the Bentonville square. The lower part of the soldier's rifle is missing after the statue was vandalized. - Photo by Ben Goff

BENTONVILLE -- Two people pleaded innocent Monday to charges related to the vandalism of a Confederate statue on the downtown square.

Laura Hammarstrom, 45, of Bentonville and Jeremy Ordaz, 41, of Bella Vista are each charged with felony criminal mischief. The pair pleaded innocent at their arraignment Monday before Benton County Circuit Judge Brad Karren.

Police officer David Leehans observed a crowd gathered on the square about 10:45 p.m. on Sept. 22, and a man flagged him down, according to a probable cause affidavit.

Leehans said a man with a bandanna over his face left the area, and Hammarstrom was standing on a pedestal near the statue, according to the affidavit.

Hammarstrom and some friends were discussing the statue during dinner at a restaurant on the square and returned later to tear it down, according to the affidavit.

Police were told that Ordaz climbed on the statue and broke the depicted rifle with a hammer, according to the affidavit.

A replica cannon ball that is part of the monument was stolen in 2017 and later was left under a park bench downtown. The stolen projectile had replaced one stolen about 2005 that was never found, county officials said.

Benton County owns the land that the monument is on and has the authority to remove it.

David Wright, the director of parks and recreation for Bentonville, said repairs have not been made to the statue.