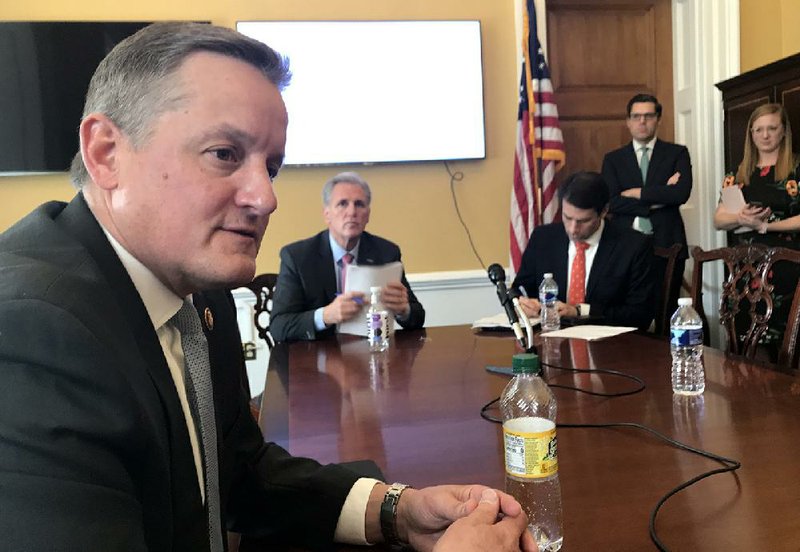 WASHINGTON -- Rep. Bruce Westerman, R-Ark., introduced the Trillion Trees Act on Wednesday, which seeks to increase reforestation efforts nationwide and provides incentives for the use of certain wood-based building materials.

"We have tremendous opportunities with trees. They're more abundant, they're more economical and they're the best tool that we have to take existing atmospheric carbon out of the atmosphere," he said.

There are about 3 trillion trees on the planet, according to a 2015 study by the journal Nature.

Planting an additional 1 trillion trees would help capture carbon that would otherwise go into the atmosphere, mitigating climate change, researchers said in a July article that appeared in the journal Science.

Since then, a Trillion Trees Initiative has been started to promote that objective.

With roughly 10% of the world's trees in the United States, the country can do its part by planting 100 billion trees, Westerman maintains.

The U.S currently plants roughly 2.5 billion trees per year, Westerman said. The lawmaker from Hot Springs aims to increase that amount by roughly 800 million per year.

The bill does not mandate the tree planting levels. Instead, it states the "sense of Congress" that the Trillion Trees Initiative should be supported and calls on the U.S. to take a leadership role in the effort.

The legislation would create an "educational grant program," dubbed the "5th Grade Forestry Challenge," that would enable fifth graders to plant seedlings while also educating them about forest management and carbon storage.

The Trillion Trees Act entails "a lot more than just planting trees," according to Westerman.

Judges would be required to consider carbon storage factors when forest management plans are challenged in court.

Westerman, who has a graduate degree in forestry from Yale, represents the state's 4th Congressional District, which includes some of the state's most heavily wooded areas.

After word got out that he was drafting tree-planting legislation, the congressman received a call last week from Ivanka Trump, President Donald Trump's daughter. She let him know that her father would be mentioning the Trillion Trees initiative during that evening's State of the Union address.

While some Republicans have questioned whether climate change is a serious problem, Westerman isn't one of them.

"At the beginning of the industrial revolution, we were at 283 parts per million carbon [dioxide in the atmosphere]. That's based on air cores out of polar ice caps," Westerman said. "Fast forward to 1958 when we started measuring atmospheric carbon. In Hawaii, it was 315 parts per million in 1958. Today, it's 411 parts per million."

"In order to meet the urgent challenge posed by climate change, we must implement a wide range of solutions across all sectors of our economy. While we haven't had the opportunity to fully assess the proposal, we are encouraged that there is an emerging bipartisan dialogue on climate in the House," the Nature Conservancy said in a statement.

Sierra Club deputy legislative director Kirin Kennedy portrayed trees as only one part of the puzzle.

"We cannot solve the climate crisis without focusing on forests. We also cannot solve the climate crisis by focusing only on forests," she said in a statement. "To truly make climate progress we must decarbonize the economy, protect existing wild places from drilling and logging that would further pollute our air, and suck existing climate pollution out of the air through forests and lands."