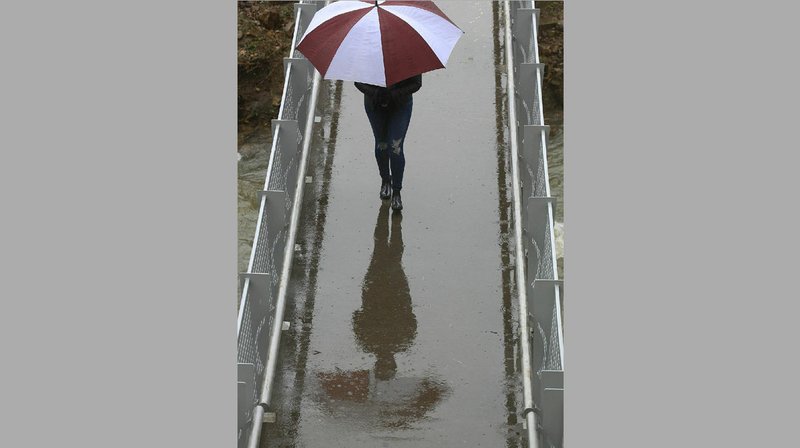 A pedestrian crosses the pedestrian bridge to the parking garage in the rain Wednesday on the University of Arkansas at Little Rock campus. (Arkansas Democrat-Gazette/Staton Breidenthal)

Heavy rains have pounded Arkansas since New Year's Day, dropping about twice as much water as normal and causing minor flooding along the White and Ouachita rivers.

Dan Koch, a meteorologist with the National Weather Service in North Little Rock, said the latest bout of rain should have moved out of Arkansas by this morning. He said most rivers in the state will crest this weekend or early next week.

"We've got high water and flood warnings out for the White River," Koch said. "There are a lot of lowlands around the White River that are flooded. The river is coming up a little more. It's not catastrophic, but the river will rise a little more through the weekend."

The White River was in minor flood stage Wednesday from Augusta to Clarendon. It's expected to crest this weekend at about 26 feet at Des Arc and 29 feet at Clarendon.

The Ouachita River from Camden south to the Louisiana state line is in minor flood stage, said Maurio Valverde, a meteorologist with the National Weather Service in Shreveport.

"It's a fairly slow-moving river so it's going to be in flood stage for a while," he said. "So even though the rain has ended in that area, in that drainage basin, the flood is going to continue to go on for several days."

Valverde said tributaries of the Ouachita River are also flooded.

The Arkansas Department of Transportation's website idrivearkansas.com showed six highways in Arkansas closed because of high water Wednesday afternoon. Three of those closed highways were in the Ouachita River basin.

Randy Ort, a spokesman for the Transportation Department, said all but one of the four closed highways could be reopened by today after the rain moves out of the state.

Ort said it may take longer for Arkansas 7 to drain in Ouachita County north of Camden. He described the flooded highways as "usual suspects," indicating they often have high water.

Ort said the flooding is not nearly as serious as it was last spring.

"Last year's river flooding was more a result of the rains we got north and west of Arkansas that ended up draining here," Ort said. "This is what we would term flash flooding. It comes up quicker, but it goes away. These are more short-lived events."

Other Arkansas cities weren't far behind:

The forecast calls for a short dry spell.

"We've got a couple of days to dry out and drain a little bit," Valverde said. "Then more rain. Hopefully not as much as we just got."

Koch said a cold front will be moving through Arkansas tonight.

"I think the big story is this front is bringing in a lot colder temperatures," he said. "Thursday night into Friday morning we're going to be seeing some of the coldest temperatures we've seen for a while."

The temperature in Northwest Arkansas will drop to the teens, said Tyler Snider, a meteorologist for the National Weather Service in Tulsa. The wind will make it feel more like 10 degrees, he said. The forecast includes a 20% chance of snow for Fayetteville early this morning.

"Winter is not ready to let go," said Koch, the North Little Rock-based meteorologist. "We've got daffodils blooming down here. I've got a cherry tree in my backyard that's blooming."