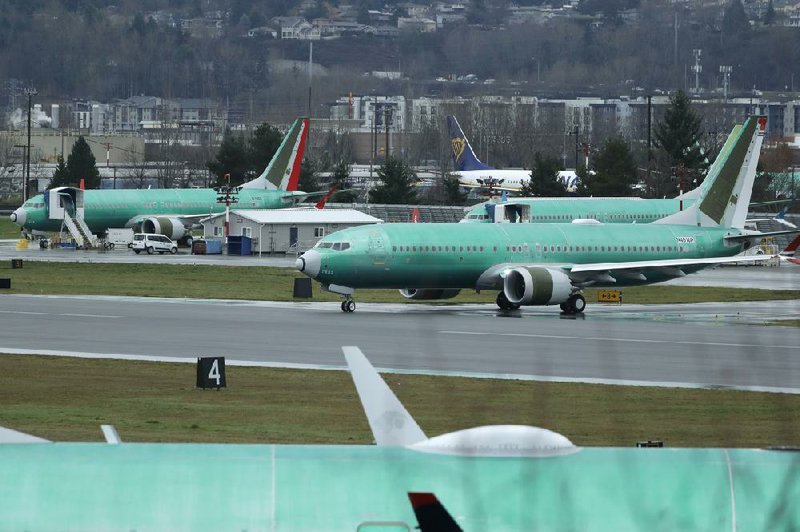 A Boeing 737 Max airplane being built for Norwegian Air International taxis for a test flight in December in Renton, Wash. (AP/Ted S. Warren)

While January is typically a very slow month for both Airbus and Boeing as they take a breath after the always-frenetic pace of jet orders and deliveries at the end of the year, this year's tally -- in the midst of the 737 Max crisis -- is a new low.

The Airbus sales included two big orders from the U.S.

Low-cost carrier Spirit Airlines ordered 100 of the A320neo family that competes directly with the 737.

And the influential Los Angeles lessor Air Lease Corp. ordered 102 aircraft, including 50 A220-300s, the former Canadian C-Series jet that Boeing attempted to block from sales in the U.S. Also in the order were 27 A321XLRs, the new long-range version of the A321neo that is building sales in the "middle of the market" segment where Boeing has pulled back on its plan to debut a new airplane.

Airbus won a net total of 117 orders for the A321neo in January.

Last year in January, Boeing won orders for 45 commercial jets. In the past 25 years, going back to the merger with McDonnell Douglas, Boeing has never come up empty on orders in January.

It came closest to zero in 2013, with just a single order placed that January for two 737s. Boeing may take solace from the fact that 2013, despite that slow start, turned out to be a boom year for orders. The company ended that year with 1,355 net orders, still the second-highest tally in the company's history.

Boeing in January delivered two of the last remaining older model 737 NGs in its backlog and a P-8 military 737 for the Navy, as well as two 767s, both destined to become Air Force tankers, two 777s, and six 787 Dreamliners.

The parallel collapse in Boeing deliveries last month is entirely because of the grounding of the 737 Max. Boeing is barred from delivering that jet.

The company had suspended production of the Max by mid-January, 10 months after the jet was grounded worldwide after two crashes that killed 346 people.

On Wednesday, spokesmen said Boeing will resume production before the plane is allowed back in the air.

Boeing expects global regulators to start clearing the aircraft to fly in the middle of this year, though senior sales executive Ihssane Mounir said Wednesday at the Singapore Airshow that the timings of their decisions may be different. Randy Tinseth, vice president of marketing for commercial airplanes, outlined the timetable to restart manufacturing and said any resumption would begin slowly.

The timing is a balancing act for Boeing. A prolonged suspension of manufacturing would put extra stress on jobs, supply chains and future airplane orders. At the same time, prematurely restarting production would only add to the 700 Max jets already on the tarmac, a backlog that Boeing says will take several quarters to clear.

Mounir said no customers were scrapping 737 Max fleet plans. Boeing is also in talks over widebody aircraft and expects to secure some orders soon, he said.

Spirit AeroSystems Holdings, a maker of fuselages, engine pylons and wing components that depends on the Max for half of its sales, has slashed its dividend to preserve cash and laid off 2,800 employees.

Tinseth mapped out some of the other elements of Boeing's plan to get the Max flying again. He reiterated the manufacturer will help train Max pilots on simulators as part of the compensation packages for airline customers.

While Boeing expects the Max to fly again mid-2020, regulators that are reviewing a fix to the jet's flight-control software -- implicated in both crashes -- will have the final word. In Singapore on Tuesday, Federal Aviation Administration head Steve Dickson said there's no schedule for the Max's recertification flight.

The 737 is a workhorse for airlines globally plying short-to medium-haul routes on fast turnarounds. The importance of getting the Max back in the air was underscored by Boeing's market forecast for Southeast Asia, a region it said will need 4,500 new aircraft worth $710 billion over the next two decades to meet demand from a growing middle class.

At a briefing Wednesday in Singapore, Mounir said the coronavirus hasn't had an impact on supply chains yet, but some deliveries for Chinese customers have been held up in Seattle. He also said Boeing is a little over a year away from entering the 777X into service. The long-range widebody aircraft, which is so big that its wings are hinged, completed its first successful test flight last month.

Information for this article was contributed by Dominic Gates of The Seattle Times and by Angus Whitley, Kyunghee Park and Anurag Kotoky of Bloomberg News.