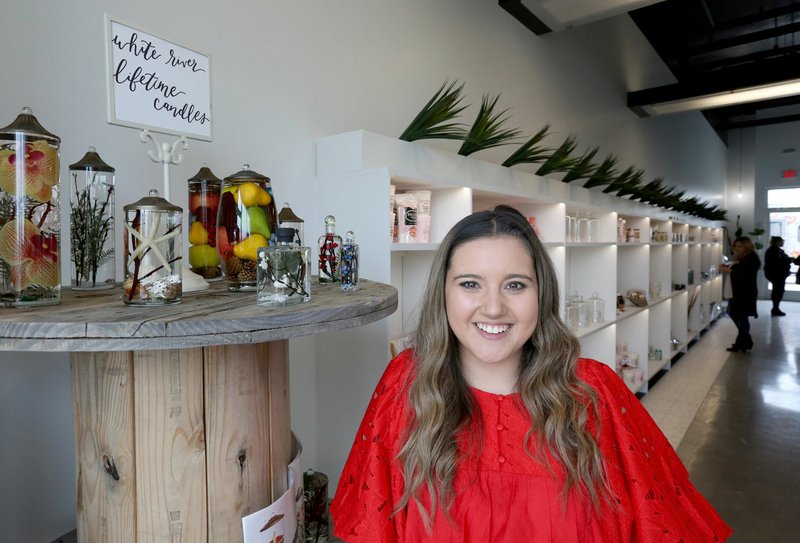 Eden Garrett, with Eden's Botanicals, stands at the entrance of her new brick and mortar store at Uptown Apartments and Retail in Fayetteville. Garrett started her business with a mobile flower truck. Check out nwadg.com/photos for a photo gallery. (NWA Democrat-Gazette/David Gottschalk)

When someone told Eden Garrett her business idea -- a mobile flower truck -- wouldn't work, instead of being discouraged, she saw it as a challenge.

"It started as a school project," explains Garrett, who was majoring in advertising at the time. "I had to come up with a hypothetical business for class, and my professor absolutely hated it. He said, 'This is the stupidest idea I've ever heard. People aren't going to buy flowers out of a truck.' I said, 'Oh, you are so wrong. Let me prove it to you.' So I spent the entire semester coming up with the project, just like it would be a real business. I talked to people about fabricating a truck, and I did all my research about flowers. When I presented it at the end of the year to the whole department, my teacher said, 'Well, you really thought this through.'"

Check out the business’ Facebook page for information on where to find the mobile florist and to find out more about hiring the truck for your special event.

Garrett laughs at the memory and then widens her eyes when she reveals the end of the story: Her professor, Charles DeBerry, wanted to invest in her idea.

"But we went and bought a truck in December of that year, and we both kind of looked at each other when we were driving it home, like, 'What did we just do?' It was nuts."

And that's how Eden's Flower Truck -- a mobile flower business that creates on-the-spot arrangements built to order -- was born.

The duo worked for several months turning the boxy truck into a chic florist on wheels. Garrett had the idea to make the interior open and airy by having large windows installed toward the rear, and they collected old barn wood to line the interior and floor of the truck. Gorgeous flowers in all manner of hues hang in galvanized buckets on the walls. The result is an Instagram-ready, magazine-worthy florist on wheels.

Garrett started running the business in March of her senior year, while she was still in college in Springfield, Mo.

"I would drive it to class, go to class and then open up on campus and sell flowers out of it," she says. It was an immediate success, as she suspected it would be. She originally got the idea from a business she saw in Nashville, Tenn., where a woman was selling bouquets out of an open-air Volks-wagen. 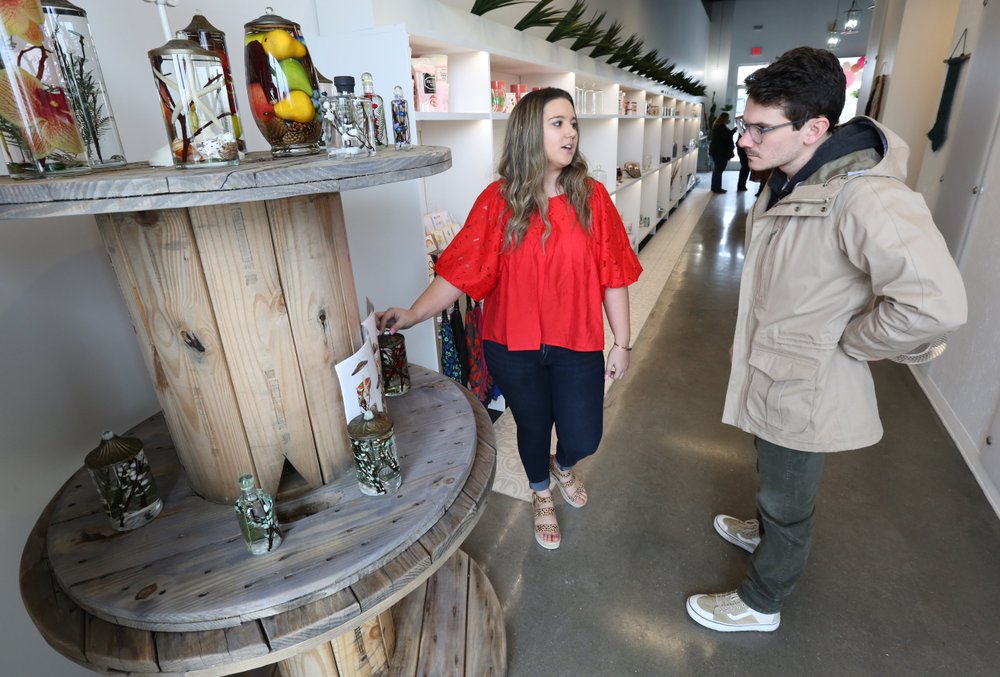 Eden Garrett (left), with Eden's Botanicals, visits with Sam Carlton at the entrance of her new brick and mortar store Friday, February 7, 2020, located at Uptown Apartments and Retail in Fayetteville. Garrett started her business with a mobile flower truck. Check out nwadg.com/photos for a photo gallery. (NWA Democrat-Gazette/David Gottschalk)

"So with mine I thought, 'How do I make that not so seasonal?'" says Garrett. "Because with hers, I noticed that if it rained, she had to close, and then she would have to close for a portion of the year until it was warmer weather. I thought, 'I'm going to do something where people walk right inside, an immersive experience, where they're surrounded by flowers.'"

The particular genius of Garrett's idea is that the mobility of the business means it can be placed in well-traveled places, catering to those who may have forgotten a special event, only to be reminded of it when they see the flower truck.

"Mostly, it's targeted towards men who have no idea what they're doing," says Garrett with a laugh. "Maybe they're in trouble with their girlfriend or wife, and they're like, 'I need some flowers.' And maybe they're intimidated to walk inside a full-on florist because they think, 'I don't know if a twenty-dollar bill can get me what she deserves,' or 'I don't know what colors.' But if a guy comes in my truck and says, 'Here's a twenty-dollar bill, make me something -- her favorite color is pink,' then I can customize it to their price point. There's no minimum or maximum -- it's whatever they happen to have in their pocket."

After graduation, Garrett spent about a year in Springfield running the truck before deciding to move to Northwest Arkansas.

"I love Northwest Arkansas," she says. "There are so many opportunities for growth here. And because I work out of a truck, I can go from Fayetteville to Rogers to Springdale to Bentonville and all of those towns in between -- so I catch more people than just being in the middle of Springfield."

Garrett says part of the process of becoming a successful business person was learning how to be flexible when business was in a slow period.

"I'm just motivated every day to push forward and make the sales higher each day -- even if it's really slow, even if, that day, no one wants flowers," she says. "I'll think, 'OK, what else can I do? Can I do deliveries? Can I announce on social media that all bouquets are $5 or that delivery is free on this particular day?' Each day, I'm going to make as much money as I can and provide an excellent product."

She's also available for parties and weddings; one popular option for celebrations are the custom flower crowns partygoers can make inside the truck.

Garrett says she's wanted to own a business since she was a child. Her first business idea -- a boutique that would serve as both a makeup salon as well as an event space, so you could get ready for a party right there at the site -- came to her when she was just 10 years old.

"My mom owned her own business, and I was just super fascinated by it," she says. "I've always known I didn't want to have a 9-to-5 job where I sit behind a desk all day -- that's just not who I am. I've always wanted to own my own business."

It's clear that her youth isn't holding her back. Eden's Flower Truck was recognized at the 2019 Fayetteville Chamber of Commerce Excellence in Business Awards Ceremony, and she's opening up her first brick and mortar store called Eden's Botanicals this month. She says opening a storefront was in her five-year plan but, when she found a perfect location on North Steele Boulevard, her business instincts told her it was the right time to make a move.

"The storefront will mostly be for workshops and parties -- more of an event space," says Garrett, who adds that the mobile truck will still be used for floral sales. "We'll also sell flower gifts [in the store]. I'm super excited."

Garrett is already looking towards the future and making plans -- big plans.

"I want to own some land, hopefully around the Fayetteville area, and have a mini-Magnolia Market, similar to [Fixer Upper stars] Chip and Joanna Gaines' business," she says. "I want there to be a few cottages, like an Airbnb, and then also have a spot to grow my own flowers so I don't have to buy them wholesale any more. And I would sell gifts and flowers and other merchandise and have it all be in one giant property, a destination that people from all over come to."

If what she's accomplished so far is any indication, the goals of her 10-year plan may just be closer than she thinks. 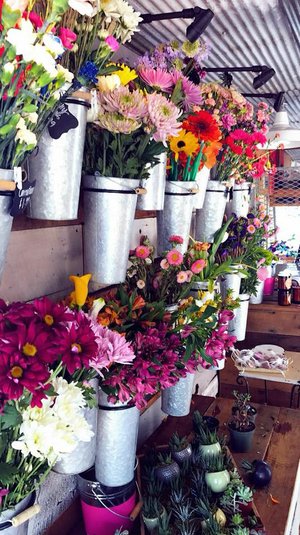 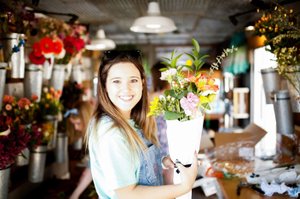 Eden Garrett says that by opening her own business at the age of 21, she was following in her mother's footsteps -- her mother opened a salon at the same age. (Courtesy photo) 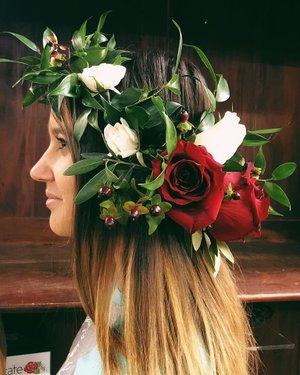 Eden's Flower Truck can be hired for special events like bachelor parties and wedding showers, where guests help create their own flower crowns. (Courtesy Photo)