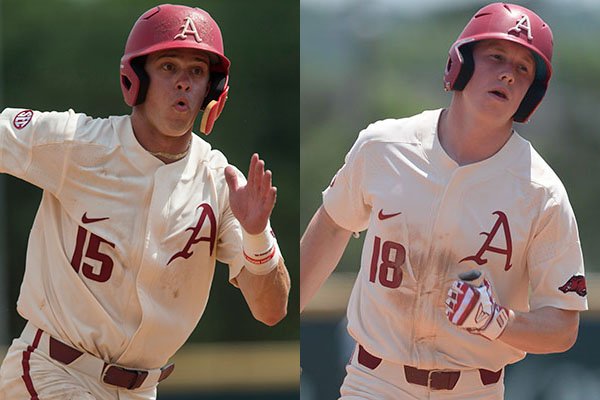 FAYETTEVILLE -- The University of Arkansas baseball team has had eight first-round picks in the Major League Baseball Draft, but never two in the same year.

That could change in 2020 if preseason projections are on target.

Outfielder Heston Kjerstad and shortstop Casey Martin -- both draft-eligible juniors -- are ranked as first-round picks by MLB.com and Baseball America.

[Video not showing up above? Click here to watch » https://www.youtube.com/watch?v=woO0oL37mZA]

Razorbacks Coach Dave Van Horn said Kjerstad and Martin have done a good job of not being distracted by the draft speculation as No. 5-ranked Arkansas prepares to open the season against Eastern Illinois at 2 p.m. Friday at Baum-Walker Stadium.

"So we'll see how it evolves. If they struggle a little bit here and there I don't think we can just solely say they're worried about the draft. It's just baseball sometimes."

Kjerstad and Martin helped Arkansas make the first back-to-back College World Series appearances in program history with records of 48-21 in 2018 and 46-20 in 2019.

[Video not showing up above? Click here to watch » https://www.youtube.com/watch?v=3JAaB879zF4]

"Like Coach Van Horn told me, it's just another season," said Kjerstad, who is from Amarillo, Texas. "Just get out there and take care of business how I have the last two seasons. Just help us any you can and get us back to Omaha [for the College World Series], because that's the main goal.

"All that preseason hype and draft talk, all that stuff will take care of itself as long as I just show up every day and take every game one pitch at a time and just do my job."

[Video not showing up above? Click here to watch » https://www.youtube.com/watch?v=b1vk-zmcgHQ]

Kjerstad and Martin have been picked as first-team All-Americans by Baseball America and the National Collegiate Baseball Writers Association.

"Expectations are high," said Martin, who is from Lonoke. "Seems like they always have been after the first year. Honestly, we're not really looking at it. We don't talk about it.

"We'll tell each other congrats and then move on. Really, that's not the concern right now. And I don't think that will be the concern during the season.

"It's great to have people think that highly of you, but at the end of the day, it's just opinions. We haven't done anything. The season hasn't even started."

[Video not showing up above? Click here to watch » https://www.youtube.com/watch?v=i2Oy_2fmmpQ]

Arkansas sophomore pitcher Connor Noland, who will start Friday's game, said Kjerstad and Martin have the same demeanor as they did last season.

"I don't think they feel the pressure," Noland said. "That's two really good guys, obviously they've been producing on the field and I think they've been carrying it in the locker room. They bring a good presence for us and I think it shows on and off the field."

Van Horn said Martin should be much improved defensively after he committed 23 errors last season, the most in the SEC.

"He's a lot better defender than he was last year," Van Horn said. "I mean, the range is incredible, but now the accuracy of his arm, just the defensive skills, he's slowed himself down a little bit.

"A lot of his errors last year were throwing ... or all he had to do was complete the play. He just didn't maybe concentrate enough, or maybe throw the ball hard enough or whatever. He pulled the first baseman off. Those were just errors that shouldn't have happened.

"We haven't seen that [in practice]. You know, he's going to make errors. It's the toughest position on the field. But he's really improved there."

Martin said he's worked hard in the offseason to be more consistent defensively.

"Mainly just slowing the clock down in my head," he said.

"The ball is coming off his bat better than it ever has," Van Horn said. "He's in the best shape of his life. He's running really well.

Kjerstad said his weight hasn't changed much while he's made some minor adjustments as a hitter.

"I maybe added 5 pounds, nothing too crazy," he said. "I think it's just me getting a little bit older, a little bit more mature. I've just kind of refined my swing and my technique a little bit."

Van Horn said Kjerstad and Martin have the right mental approach to the game going into their draft-eligible season.

"Heston is pretty level-headed, and I don't feel like it's going to faze him too much," Van Horn said. "If he slumps a little bit I just feel that's part of the game.

"With Casey, I've seen him grow up a lot in the last 12 months. He's worked hard, and he knows what's ahead of him, and he knows it's a team game, and that he doesn't have to carry us. So that's a good thing."

Van Horn said Kjerstad and Martin should play their best this season.

"Yeah, that's my expectation," Van Horn said. "They're older and more experienced. Why wouldn't they be better?"

EASTERN ILLINOIS AT NO. 5 ARKANSAS