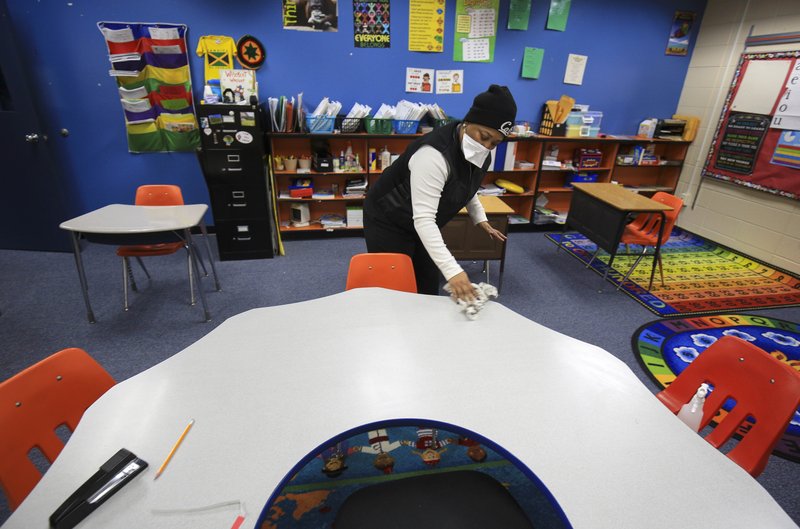 In this file photo Principal Shoutell Richardson helps disinfect a classroom at Rockefeller Elementary and Early Childhood Center in Little Rock. At least 36 Arkansas schools or school districts have closed briefly because of the flu. (Arkansas Democrat-Gazette/Staton Breidenthal)

The number of flu-related deaths reported in Arkansas this season has risen to 46, which is double the number reported about the same time in the 2018-19 season, according to the state Department of Health.

Experts don't believe the outbreak has peaked. Jennifer Dillaha, medical director for immunizations and outbreak response at the Health Department, said she hopes the state will have a decline in cases in about eight weeks, based on patterns from previous years.

"I hope it will slow down tomorrow, but I don't think it will," she said Wednesday.

Two of the people who died of the flu between Feb. 4 and Monday were between the ages of 45 and 64, while eight were 75 or older, according to reports from the Health Department.

More than 20,560 positive tests have been reported this season, officials said, and at least 36 schools or school districts had closed briefly because of the flu.

Little Rock School District campuses were closed Monday and Tuesday after a high number of teachers called in sick, according to the district.

The district issued a statement Sunday night saying a number of schools within the district had reported higher-than-normal absenteeism in recent weeks among students and staff members because of the flu. The state said the closure was made to give ill faculty members and students time to recover, and others time to clean and/or sanitize the buildings and buses.

Superintendent Mike Poore on Tuesday announced the reopening of the buildings in the 23,000-student district.

There were questions whether the high number of absentee teachers was because of a job action by the employee association rather than a flu outbreak, but Poore described such speculation as rumors.

Flu season generally runs from October through May.

Nationally, there have been at least 22 million flu illnesses, 210,000 hospitalizations and 12,000 deaths from the flu so far this season, according to data from the federal Centers for Disease Control and Prevention in Atlanta.