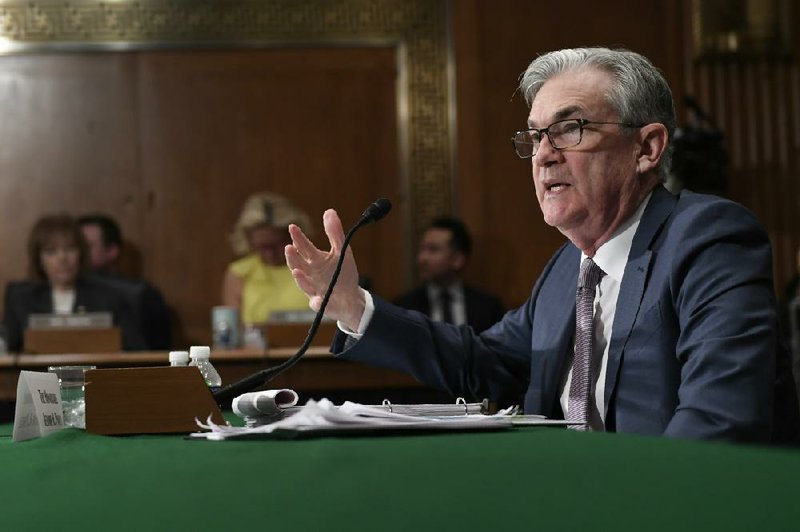 In testimony before the Senate Banking Committee on Wednesday, Federal Reserve Chairman Jerome Powell said in the event of an economic downturn, the Fed would have to use large-scale asset purchases because historically low interest rates have little room for more cuts. More photos at arkansasonline.com/213powell/ (AP/Susan Walsh)

WASHINGTON -- Republican and Democratic senators voiced strong support for an independent Federal Reserve during a hearing with Fed Chairman Jerome Powell, one day after President Donald Trump aimed another attack at Powell on Twitter.

"Stay independent," Sen. John Kennedy, R-La., told Powell during Wednesday's hearing. "I think you're doing a great job. All of us in politics are going to give you advice, but call 'em as you see 'em."

The support from members of the Senate Banking Committee suggests Trump's attacks on Powell and the Fed have found little traction among members of his own party on Capitol Hill. Powell has made numerous visits to Senate and House members' offices since being appointed Chair by Trump in February 2018.

Trump has called Fed officials "boneheads" and argued that the central bank should cut interest rates further. The Fed's benchmark rate is currently in a historically low range of 1.5% to 1.75%.

Sen. Mark Warner, D-Va., said that many other government institutions are "under assault" from the Trump administration, citing White House attacks on intelligence agencies and turmoil at the Justice Department over the prosecution of Trump's associate Roger Stone.

Warner said that if Powell were to "see any efforts made to undermine the Fed's independence that you make us aware of that."

"The Fed's independence is more important than ever at this point," Warner added.

The comments came on the second day of Powell's semiannual appearances before Congress and the day before the panel's hearing for the president's latest picks for the central bank's Board of Governors.

Powell testified Tuesday before the House Financial Services Committee, when Trump criticized him.

Trump tweeted Tuesday that the Dow was falling as Powell spoke "as usual," and said interest rates in the U.S. were too high.

Asked by Rep. Al Lawson, D-Fla., if he had a reaction to that comment, Powell demurred.

"My colleagues and I are completely focused on using our tools to support the American people, to support the achievement of our goals," Powell said in his House testimony. "That's really all we're focused on."

Trump has been hammering Powell and the Fed for well over a year. During testimony on Tuesday, House Financial Services Committee Chairwoman Maxine Waters, D-Calif., said that the president had tweeted criticism of the central bank more than 100 times since picking Powell to lead the institution.

During Wednesday's hearing, Powell said the Federal Reserve will be forced to use large-scale asset purchases "aggressively" in the event of a downturn in the economy, as central bankers confront the dilemma of continuing low interest rates.

"We will have less room to cut," Powell told the senators. "Low rates are not really a choice anymore, they are a fact of reality."

The comments indicate that the Fed chief is prepared to lower rates to zero in the next recession and deploying crisis-era policy tools that proved controversial with Congress.

The Fed's three benchmark-rate cuts in 2019 have been accompanied by tumbling longer-term rates, pushing yields on 10-year Treasury notes to 1.63% from 1.59% late Tuesday, raising questions about whether asset purchases would also push longer-term government yields to zero.

The Fed is conducting its first-ever strategic policy review and multicity listening tour to consider how officials could do a better job of hitting their 2% inflation target, which it has undershot since being adopted in 2012. The review received scant attention at the hearings even though lawmakers oversee how the Fed achieves its congressional mandate for stable prices and maximum employment.

Powell said that in this low-rate environment, the Fed will ensure "that we are using our tools as best we can, that we've explored every possible way to find every scrap of policy space, if you will, to be able to support the economy."

The Fed has ruled out raising the inflation target and has placed negative interest rates near the bottom of its list of alternatives. Powell cited forward guidance, where the Fed pledges to hold the interest steady for a time or until certain economic conditions are realized, and a return to the heavy asset purchases used during the crisis as go-to options.

He added that it's important for fiscal policy to be in a position to support the economy in a downturn as well.

Powell also addressed housing markets and risks from the coronavirus on Wednesday.

"Housing is generally facing difficulties in affordability, Powell said. "You have a squeeze going on, to do with difficulty in getting lots. There are just supply side constraints which are keeping the quantity of housing down."

On the coronavirus, Powell said: Whatever impact it has on the U.S. economy will show up in the economic data soon, but it's too uncertain to say whether it will lead to a "material" change in the U.S. outlook. He said the impact should be "substantial" in China and "important but maybe less substantial" among China's close trading partners.

Information for this article was contributed by Max Reyes and Craig Torres of Bloomberg News and by Christopher Rugaber of The Associated Press.