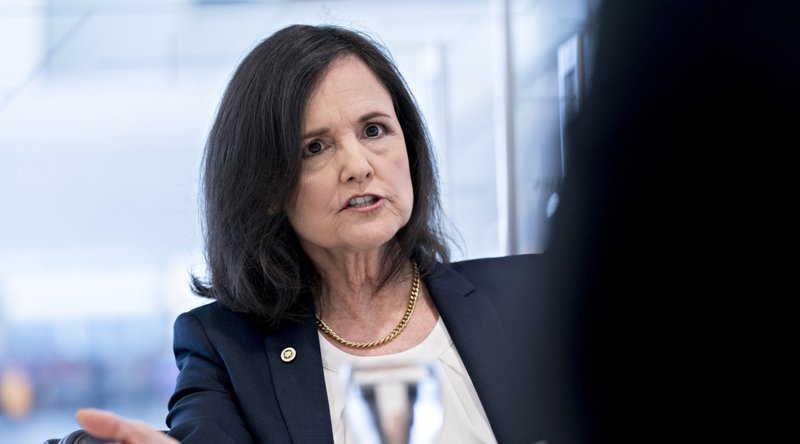 Judy Shelton is shown in this photo.

WASHINGTON -- Senators will vet Judy Shelton, a prominent Federal Reserve critic, for one of the central bank's top jobs today, a moment that many economists will be watching closely because they see her as a potential threat to the central bank's prized independence.

But it is not just her heterodox economic views that are making former central bankers and top economists wary, according to interviews. It is the possibility, based on her track record, that Shelton could bend her positions to suit Trump's preferences, subordinating monetary policy to the White House's desires.

The stakes are high. While individual Fed governors have just one vote out of 12 on monetary policy, she could be a natural pick to be the central bank's next chairman should Trump win reelection. That would put her in a position to change the fabric of the institution. While Fed chairmen must build consensus among their colleagues, they have historically been the central players in U.S. monetary policy.

"When someone is qualified, shades of gray on their politics, you just don't care -- but when it seems like they're willing to usurp all economics for political gain, that's when you've crossed a line," said Diane Swonk, chief economist at accounting firm Grant Thornton. "It's mind-boggling. It's disturbing. It's dangerous, as well, because of the potential for her to be the next Fed chair."

That suggests Trump, if he were to win reelection, might not reappoint Powell when his term as chairman expires in early 2022.

Shelton would be one potential replacement. Trump also could tap one of the other governors he has picked -- including Christopher Waller, who is currently research director at the Federal Reserve Bank of St. Louis and was nominated to the board alongside Shelton.

Waller, who also will face Senate scrutiny today, was an academic before joining the Fed and has a resume and record of research more typical of central bankers. For years, the St. Louis Fed has doubted that low unemployment would spur higher inflation, and White House economic adviser Larry Kudlow has highlighted that skepticism as a key reason that the president tapped Waller and Shelton.

Given the tension between Trump and Powell, "there's reason to think he's looking at Fed governor nominees and thinking about a future Fed chair," said Michael Strain, director of economic policy studies at the American Enterprise Institute. "That suggests a higher level of scrutiny of these nominees is important."

Shelton's public campaigning for the Fed job, which included a series of media interviews she arranged in the lobby of the Trump International Hotel in Washington, has helped to spur speculation that she might become a favorite to replace Powell. So has her friendship with Kudlow and her willingness to change her views.

Shelton called for higher interest rates in the wake of the late 2000s recession, and as recently as 2016. Since Trump's election, she has spoken out in favor of rate cuts.

She initially couched her change of position as technical. She said she wanted to cut rates in order to phase out the Fed's post-crisis practice of paying interest on excess money that banks deposit at the central bank. More recently, she has said that lower rates would allow the economy to grow uninhibited as the administration's policies fueled higher investment and productivity.

"When you have an economy primed to grow because of reduced taxes, less regulation, dynamic energy and trade reforms, you want to ensure maximum access to capital," she told the The Wall Street Journal.

She has also questioned the basis of the Fed's independence from the White House, even as she acknowledged that central bankers believe that distance shores up their credibility.

"I don't see any reference to independence in the legislation that has defined the role of the Federal Reserve for the United States," she said, in a question-and-answer session in Washington last year. Related legislation "demands that the board of governors of the Federal Reserve work hand in hand with Congress and the president to meet certain strategic economic goals for the United States."

Shelton would hardly be the first appointment to the seven-member Fed board with a heavy partisan lean. President Ronald Reagan, who was not a fan of Fed independence, stacked the Fed with enough supporters to challenge then-Chairman Paul Volcker.

But current Fed officials robustly defend the central bank's independence from politics, and Powell often says that interest rates are set with an eye toward the economy alone because the Fed avoids "mistakes of character." History suggests, and some research shows, that politically tied central bankers can favor policy that hurts the economy in the longer run.

Shelton is expected to face pointed questioning at her confirmation hearing today before the Senate Banking Committee and must ultimately win confirmation from the full Senate.

Bankers are skeptical of Shelton's nomination. One senior financial services executive said her questioning of the Fed's independence, her skepticism of the need for deposit insurance, and her track record of advocating an anchored currency are areas that would draw lawmaker questions.

Congress has been in the Fed's corner during much of Powell's tenure. When the chairman testifies on Capitol Hill, as he did this week, he is assured that the Fed's independence is valued.

Senators have previously shot down possible Trump administration appointments to the Fed's board that were viewed as partisan and problematic.

Conservative commentator Stephen Moore and former pizza executive Herman Cain were talked about for the job but never formally nominated after lawmakers expressed concern about their past statements and actions toward women.

Past Fed nominees have scuppered their chances during their Senate testimonies. But Shelton has already passed Senate confirmation once, when Trump nominated her as the U.S. envoy to the European Bank for Reconstruction and Development. She is a practiced public speaker.

If Shelton is confirmed for the Fed but never elevated to the chairmanship, she will have more limited room to shake things up since individual governors hold just one vote on monetary policy, alongside their six fellow board members and five regional Fed presidents.

"If Dr. Shelton comes onto the board of governors and just represents a different point of view, there is no harm to it and possibly some good," said Adam Posen, president of the Peterson Institute for International Economics. "If, however, this is an attempt to politicize the board's discussion and possibly undermine the chair," then "that would be a loss for the whole country."