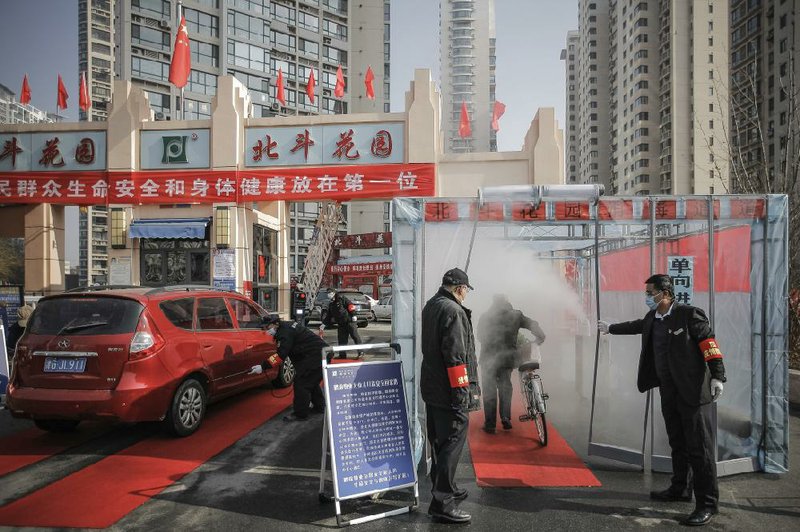 Security guards hold the curtain Tuesday for a cyclist to pass through a disinfectant spray as the cyclist returns home at a residential complex in northern China’s Tianjin Municipality. More photos at arkansasonline.com/213virus/ (AP/Chinatopix)

BEIJING -- The number of new cases of the coronavirus in China dropped for a second-straight day, health officials said Wednesday in a possible glimmer of hope in the outbreak that has infected over 45,000 people worldwide and killed more than 1,100.

Dr. Mike Ryan, the head of emergencies for the World Health Organization, said it is "way too early to try to predict the beginning of the end" of the crisis in China, but he said, "the stabilization in cases in the last number of days is very reassuring and it is to a great extent the result of the huge public health operation in China."

Meanwhile, a second case of the virus has been confirmed in the U.S. among evacuees from China, the U.S. Centers for Disease Control and Prevention announced Wednesday. The person was aboard a flight from the city of Wuhan that arrived at Marine Corps Air Station Miramar in Southern California last week, the CDC said.

The patient was in isolation at a San Diego hospital, the UC San Diego Health system confirmed.

[Video not showing up above? Click here to watch » https://www.youtube.com/watch?v=hWpKeRp_Tmg]

China has locked down 60 million people to curb the spread of the virus, which has hit hardest in the city of Wuhan and surrounding Hubei province.

The country's National Health Commission said 2,015 new cases were counted Tuesday, the second-straight daily decline and down from nearly 3,900 a week ago. Commission spokesman Mi Feng said the situation is still grim but "we have seen some positive changes."

WHO Director-General Tedros Adhanom Ghebreyesus said in Geneva that the numbers "must be interpreted with extreme caution," adding: "This outbreak could still go in any direction." At the same time, he noted that the number of other countries reporting cases -- about two dozen -- has not changed since Feb. 4.

At the end of a two-day meeting aimed at speeding the development of new tests, drugs and vaccines for the new virus, the U.N. agency said scientists had agreed upon a set of global research priorities but warned that it could still take considerable time before any licensed products might be available.

• Chinese President Xi Jinping promised tax cuts and other aid to industry as the ruling Communist Party tries to limit the mounting damage to the economy.

Meanwhile, organizers of the world's biggest mobile technology fair -- the annual Mobile World Congress show, set for Feb. 24-27 in Barcelona, Spain -- canceled the event because of worries about the viral outbreak.

• A citizen journalist reporting on the epidemic in Wuhan has disappeared, activists said, becoming the second to vanish in recent days as China tightens controls on information.

Fang had posted videos of Wuhan's overcrowded hospitals, including bodies in a van waiting to be taken to a crematorium. The last video he posted was of a piece of paper reading, "All citizens resist, hand power back to the people."

• Japan's Health Ministry said today that 44 more people on a cruise ship quarantined near Tokyo have tested positive for the virus.

The ship, which is still carrying more than 3,500 passengers and crew members, has 218 people infected with the virus out of 713 people tested since the ship returned to the Yokohama Port on Feb. 3.

Another cruise ship, turned away by other Asian and Pacific governments over virus fears, anchored today off Cambodia, which is checking the health of its 2,200 passengers and crew.

The Westerdam was unwelcome elsewhere even though operator Holland America Line said no cases of the coronavirus have been confirmed among the 1,455 passengers and 802 crew members.