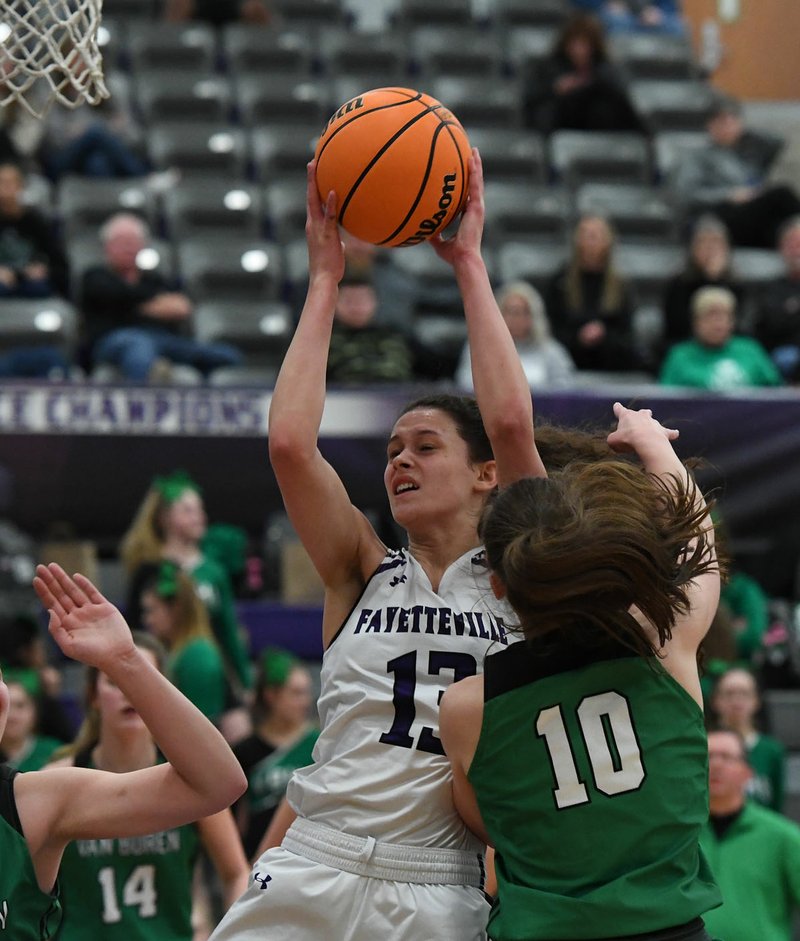 FAYETTEVILLE -- One early timeout was all Fayetteville needed to get refocused Tuesday night.

Sasha Goforth made five 3-pointers and scored 19 points as Fayetteville rolled to a 63-37 victory over Van Buren in 6A-West action at Bulldog Arena. Caroline Lyles had 12 points while Claudia Bridges and Coriah Beck each added 11 for Fayetteville, which can now turn its attention to Friday's showdown at league-leading Bentonville.

Fayetteville coach Vic Rimmer called a quick timeout Tuesday after Fayetteville fell behind 5-0 to Van Buren, which began the night in sixth place in the league. Fayetteville came back out of the huddle and dominated play while roaring ahead 33-17 at halftime. The Lady Bulldogs finished with 10 3-pointers.

"We had a slow start but Van Buren kind of makes you do that," Fayetteville coach Vic Rimmer said. "They play a zone defense and they're methodical on offense. We had a quick timeout and the kids got focused and started making some shots."

Goforth, who had 11 points at halftime, stepped outside for two 3-pointers then went inside where she either scored or drew a foul. Goforth was also active on defense, where Van Buren was mostly reduced to shooting and missing on 3-point attempts.

Fayetteville turned the game into a blowout while outscoring Van Buren 19-9 in the third quarter. Claudia Bridges, Loren Lindsey, and Goforth each made 3-pointers when Fayetteville (18-4, 9-1) increased its lead to 52-26 heading into the fourth quarter. Fayetteville reserves took the court early in the fourth quarter, which was played with a running clock because of the sportsmanship rule.

"When we shoot the ball well from the perimeter, we're pretty good," Rimmer said. "Goforth got hot early and Claudia Bridges started making some threes. I was pretty please with Caroline Lyles and Coriah Beck on the inside."

[Don't see the gallery above? Click here to see photos from the games.]

The Lady Mounties hit 14 of 18 free throws in the fourth quarter to pull away for the 6A-West Conference win.

The Lady Mounties led 24-23 at halftime thanks to Treadwell's late 3-pointer and 33-30 after three quarters.

Caylan Koons scored the game's first seven points and had 11 of her 19 points in the first quarter as Har-Ber cruised to a win in Bulldog Arena.