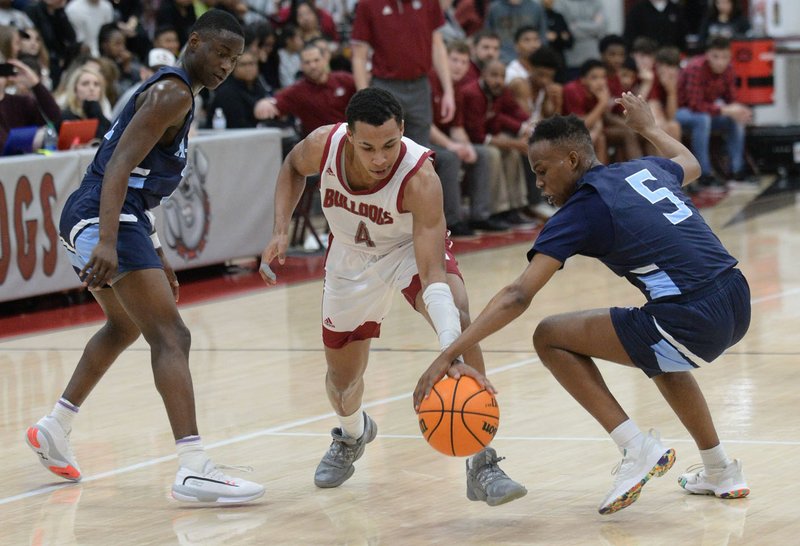 Springdale's Grant James (4) attempts to dribble Tuesday, Feb. 11, 2020, past Har-Ber's Tavari Eckwood (5) as Jajuan Boyd (left) defends during the first half of play in Bulldog Arena in Springdale. Visit nwaonline.com/prepbball/ for a gallery from the games. (NWA Democrat-Gazette/Andy Shupe)

The senior guard buried an 18-footer to give the Wildcats the lead for good as they remained atop the 6A-West Conference standings with a 35-30 victory over their crosstown rival in Bulldog Gym.

"He's so hard to guard," Har-Ber coach Tommy Deffebaugh said of Boyd, who finished with a game-high 20 points. "He can get his own shot, and he can play through contact. He's really explosive, and he can shoot the open 3 or open 15-footer. So he's a three-way player.

"When you have him as a three-way player and you have the other guys who are quick and do what they do, it just opens it up for him. Of course, him coming back to Springdale, I'm sure he was feeling pretty good."

[Don't see the video above? Click here to watch highlights from throughout the game as well as Coach Deffebaugh's post-game comments.]

It turned out to be Springdale's last field goal, and Lawson Jenkins' bucket gave Har-Ber a 30-29 lead. Hignite tied it at 30 with a free throw before Boyd broke the deadlock with his jumper inside the lane, then he followed his missed 3-pointer with a bucket inside after Springdale missed a chance to tie it again with an alley-oop play to Jordan near the 2-minute mark.

"The thing I was proud of my guys about is when our offense wasn't there, we still found a way to win," Deffebaugh said. "They had 19 points at half, so we held them to 11 points. A lot of times you have to do that, and it was a defensive night.

"I knew we were locked in, and we started switching our man-to-man defenses, and our guys are pretty good about it. We really don't practice switching because I've always told them we don't necessarily have to switch unless it's a situation where we have to. But they wanted to switch on their own."

Boyd was the only Wildcat to finish in double figures. Owens and Hignite each had 10 points for Springdale, which had a three-game winning streak snapped.

[Don't see the gallery above? Click here to see photos from the games.]

Van Buren got to within eight points in the third quarter to prompt a Fayetteville timeout. Corey Williams then responded with two 3-pointers as Fayetteville pushed its lead to 60-42 early in the fourth quarter.

Elliot Paschal scored 20 of his game-high 22 points in the first half to help the Mounties grab a lead en route to the big 6A-West Conference win.

Bentonville held Heritage to just three points in the first quarter, and the Tigers snapped a two-game losing skid with a victory in War Eagle Arena.

Logan Glenn, Logan Clines and Jason Kimball each had six points for Heritage (9-13, 2-8).