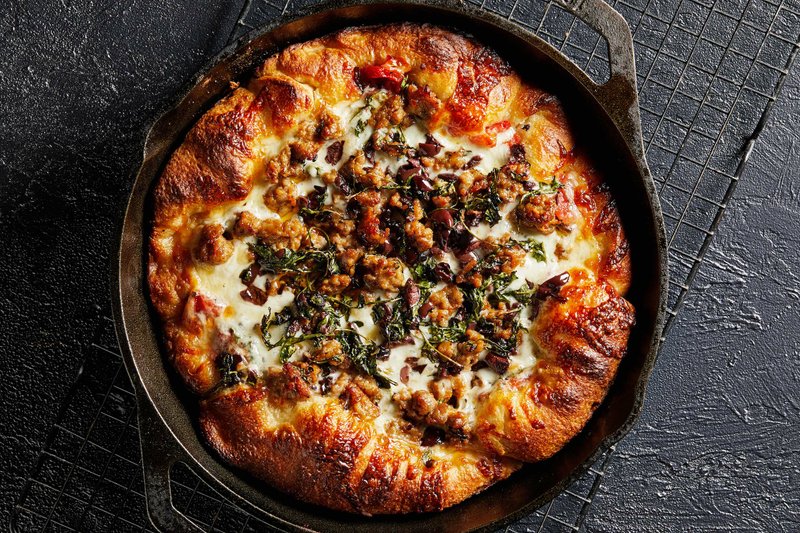 Crispy pizza crust is so satisfying. It's essential if I'm going to give a pie a gold star, especially if we're talking about the thick crust style, with the dough battling the toppings for a starring role.

The first thing I noticed as I took my first bite of this incredibly easy Italian Sausage and Kalamata Olive Cast Iron Skillet Pizza was the sound — that crunch.

The beauty of this little pizza, made in a piping hot cast-iron skillet, is that you can have it ready in less time than ordering takeout. And, because you're making the pizza at home, it doesn't get softened by delivery-box steam.

Pizza dough is easy enough to make at home. The pizza dough you'll get will be superlative, but you'll be adding many more minutes to the recipe preparation. Lots of people make their dough in advance and store it in the refrigerator or freezer, so it is ready to roll when they walk in the door at 7 o'clock on a weeknight. Otherwise, look for a ready-to-bake dough at your grocery store. You also can swing by your local pizzeria on your way home and see if they'll sell you a ball of dough -- some parlors are happy to do that.

Keep in mind, though, that the golden key to unlock the crunch in this recipe is the blazing hot cast-iron skillet. When the raw dough hits the hot metal, it almost immediately begins forming a crust.

The other key to that crunch is to keep the toppings mostly dry. Rather than a sauce, this recipe calls for diced, fire-roasted canned tomatoes that are drained. Because the pizza cooks at such a high temperature, it's important to layer the ingredients as directed, start with tomatoes, then layer cheese, sausage, cheese, sausage. Do not end with cheese on top because it will burn at that high heat.

The 12-inch cast iron skillet heats up in a 500-degree oven while you prepare the toppings, so it is essential to be prepared. Gather everything you'll need to protect your hands (sturdy oven mitts) and your counters (a heatproof surface, such as cookie rack) before pulling that hot pan out of the oven.

Position a rack in the middle of the oven and heat to 500 degrees. Place a well-seasoned 12-inch cast-iron skillet, or other ovenproof, heavy-bottom skillet, in the oven.

In another large skillet over medium-high heat, heat 1 tablespoon oil until shimmering. Add the sausage and cook, breaking up the pieces with a wooden spoon, until no longer pink, 5 to 8 minutes. Add the olives and stir to combine. Remove the skillet from the heat. Stir the arugula into meat.

Stretch dough into a 12-inch circle on a lightly floured surface.

Using sturdy oven mitts, carefully remove the very hot skillet from the oven and place it on a heat-safe surface. Sprinkle the cornmeal into the skillet. Carefully place the dough on top of the cornmeal and press the dough out toward the edges of the pan, being careful not to touch the very hot skillet. It's OK if the dough bounces back a bit. Brush the edges of the dough with the olive oil, creating a 1-inch border of oiled dough.

Spoon the tomatoes over the dough, leaving a 1-inch border bare. Top with half of the mozzarella, followed by the half of the sausage-arugula mixture. Repeat with the remaining mozzarella and sausage mixture.

Return the skillet to the oven and bake for about 15 minutes, until the bottom of the pizza is crisp and the cheese is starting to bubble.

Let cool on a wire rack for at least 3 minutes before serving. Using oven mitts to hold the hot pan, tilt the pan over a cutting board and use a spatula to gently slide the pizza onto the board.

Sprinkle with parmesan and fresh basil, if desired, then cut and serve.