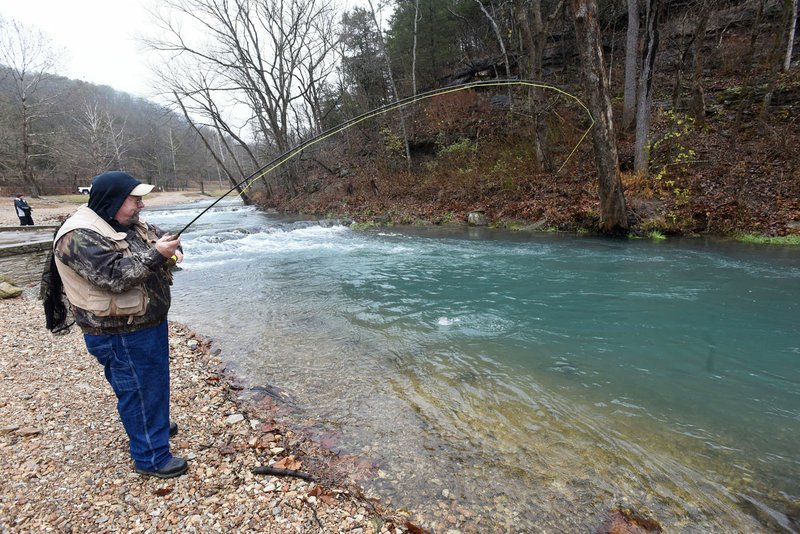 The middle of winter ushers in a lot of last days.

The silver lining is that the list of last days means we can look forward to a lot of first days that are close at hand. Some first days aren't on a specific date.

There's the first days of the walleye spawning run, usually in late February, when jumbo-sized walleye fin their way up the tributaries of Beaver Lake. Anglers eagerly wait to welcome them.

Following the tail fins of those walleye are hard-fighting white bass. Mid-March is usually the first days of fast fishing for white bass. These denizens migrate upstream in schools, mainly up the White and War Eagle rivers.

What angler doesn't keep an ear on the fishing grapevine for the first reports of good crappie fishing, as water temperatures climb into the 60s. Hundreds of trout advocates gather at Roaring River State Park on March 1 for the first day of catch and keep fishing season.

Those firsts are close at hand, but we've enjoyed a banquet of good times on these last days.

On Jan. 31, the last day of duck season, I spent that final day in a cozy duck blind with two hunting pals keeping eyes on the sky for mallards to drop into our decoys.

The comfortable blind is near Northwest Arkansas National Airport on a private hole of water. I'd call it a "plake." Too big to be a pond, a tad small for a lake.

Amazing how three guys can spend five hours in a duck blind, never see a duck and have a fabulous morning. Our host's hide-away is the most palatial duck blind I've sat in. It's roomy as a one-car garage and has walls and a roof to keep the wind and rain away.

Best part is the little propane camp stove in the corner. Our host whipped us up a pot of hot, black coffee. Later, he got some brats sizzling on the grill side of the stove. That's a mighty fine way to end duck season.

A typical visit during catch and release season starts with fishing in the morning. Around lunch time, we stash the fly rod and pull a hiking stick and day pack out of the car. We'll hit one of the park's trails with a tasty lunch stashed in the pack.

Most hikes we'll pull up a boulder and enjoy a fine trailside picnic. Sometimes we'll eat at a park picnic table and watch the catch and release fishing action. Then it's back to the stream for another hour or two of trout fishing.

We slid one last trout back into Roaring River last Monday, Feb. 3, then bid a fond good-bye to the stream and park. We'll be back when catch and release season opens again in November.

The last day of archery deer season is Feb. 29. We never miss a last-day bowhunt at Camp See No Deer. It's a ritual, mostly, of going through the motions and reminiscing about the season. For some reason, deer get even scarcer at Camp See No Deer after Christmas.

Much as we've enjoyed these last days outdoors, we're ready for the new. Bring on those firsts.