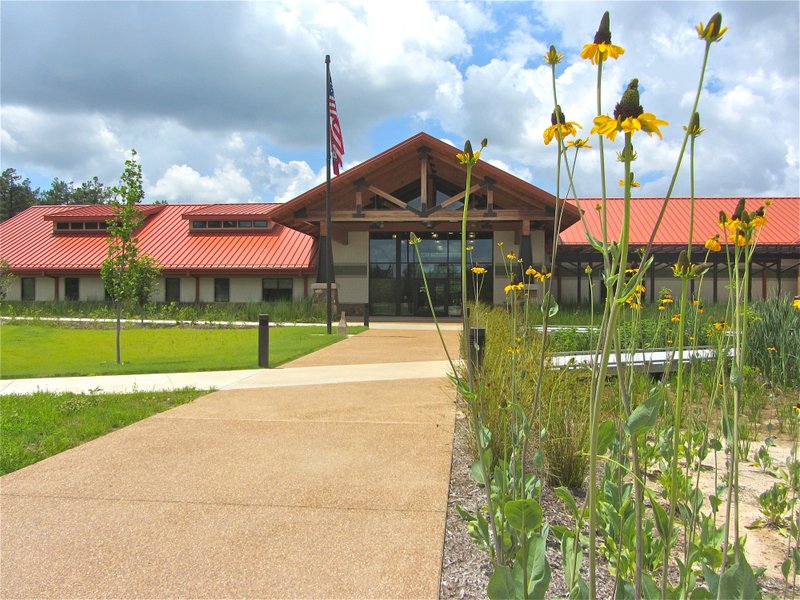 But residents of the Natural State's eastern counties still find a lot to like — even to love — about their home turf. That's evident in sticky notes (one in Spanish) written by the region's visitors to Mississippi River State Park and posted on a visitor centerboard labeled "What is the Delta to you?"

These are some of the succinct answers:

"My first RC Cola and Moon Pie, catfish and crappie"

One note gives a crisp summary: "The Delta is — quite simply — home."

Opened in 2013, the facility is staffed by the Arkansas Department of Parks and Tourism and the U.S. Forest Service. That reflects a partnership in which the 536-acre state park, scattered over several locations along Crowley's Ridge, lies within the boundaries of 23,000-acre St. Francis National Forest.

The federal forest was established in 1960, nearly three decades after the area came into public ownership during the Great Depression. The U.S. government had bought the land from private owners before the Works Progress Administration created two lakes and built the ridge road in 1938.

Despite the park's name, its visitor center is situated eight miles from the Mississippi River. That's due to the mighty waterway's propensity for serious flooding. Crowley's Ridge eventually was chosen as a high-and-dry location, with the added virtue of showcasing the national forest's sylvan scenery.

Three miles south of the center, a well-equipped campsite sits in a choice location on a wooded peninsula of Bear Creek Lake. Amenities include two docks for boaters on the lake, which is known for its bass and bream fishing.

The fish and other wildlife species found in the park, as well as the larger national forest, are among topics addressed by informative exhibits at the visitor center.

Getting there: To reach the center from Marianna, follow

Arkansas 1B to Arkansas 44 and continue 3 miles southeast.

Some interactive displays are targeted mainly at youngsters, such as nature-inspired riddles hidden beneath peekaboo panels. Even adults might manage a mild chuckle at the likes of this example: "What did the tree say after burning down?" The answer: "I can't beleaf this!"

There's a hortatory pitch to some of the displays. Visitors are urged as they enter to "Observe, Study, Explore." On the way out, they are asked, "What is my next step?" The answer: "Enjoy, Participate. Contribute." Perhaps being a passive tourist is no longer enough, an apt message given all the 21st-century threats to the natural world.