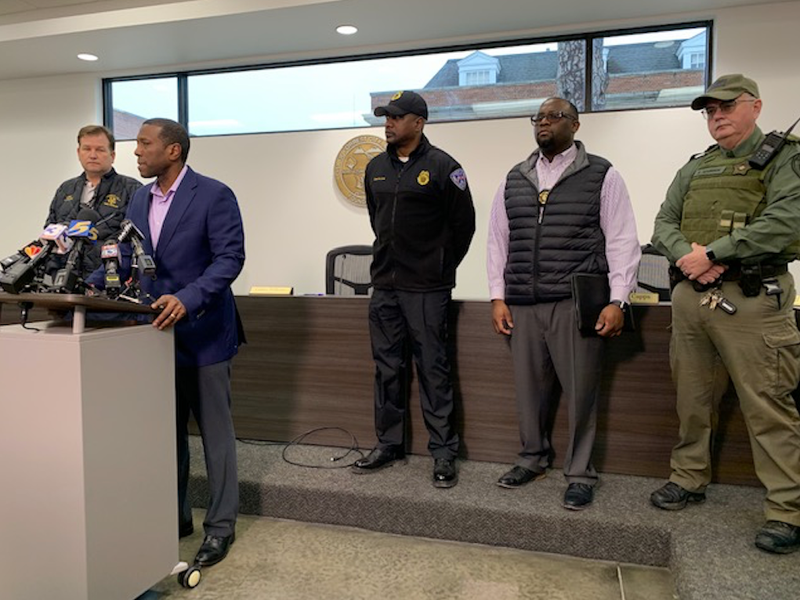 Forrest City Mayor Cedric Williams speaks at a news conference Monday after a shooting at a Walmart in the city left two police officers injured and the suspected gunman dead. - Photo by Staton Breidenthal

Two officers were injured, one seriously, during a shooting at a Forrest City Walmart, officials said. The suspected gunman died and no civilians were injured.

Det. Eugene Watlington and Lt. Eric Varner of Forrest City police responded just before 10:30 a.m. to the Walmart at 205 Deaderick Road after reports of an individual threatening people and acting strangely.

The officers approached the individual near the grocery area, Forrest City police Chief Deon Lee said. He declined to go into detail about what happened between the officers and the suspect, citing an ongoing investigation of the incident by state police.

Lee did not answer whether either of the officers fired their weapons or what weapon the suspect possessed. Lee also did not confirm the identify the suspect, saying he did not know whether next of kin had been notified.

Lee said the suspected shooter was known to police but nothing indicated he would ever open fire in a public place. He said state police would release more information Monday afternoon.

"The quick response of our officers saved a lot of lives today," Lee said.

Lee said Varner was treated and released from a local hospital. Waltington was in surgery at a Memphis hospital as of early Monday afternoon, Lee said.

"The initial prognosis is, he's going to be OK," Lee said. "He's doing better than expected."

Neither were wearing vests or body cameras, Lee said, and both were part of the criminal investigation division. He said they were dressed "as detectives" when asked whether they were in uniform.

The pair engaged the suspect before patrol officers or others who were also en route because they happened to be in the area and got there first, Lee said.

Multiple law enforcement agencies responded to the incident, including Arkansas State Police, the St. Francis County sheriff's office, the Bureau of Alcohol, Tobacco, Firearms and Explosives and other local agencies. The Forrest City Police Department has about 30 officers, Lee said.

Forrest City Mayor Cedric Williams said the Walmart has been shut down and an investigation into the shooting is ongoing.

“Thanks to the response of our officers this tragic event wasn’t as bad as it could have been," the mayor said.

Gov. Asa Hutchinson wrote on Twitter that he was grateful for the law enforcement officers who put their lives at risk to keep the public safe.

Arkansas State Police said the agency’s Criminal Investigation Division has been requested to conduct an investigation into the shooting and is expected to issue a news release Monday afternoon.

Walmart spokesman Scott Pope said the company was working with the Forrest City Police Department with its investigation but declined further comment. Walmart is based in Bentonville.

Tammy Priddy, 57, works at Simmons Eye Center in the Walmart. She said she was preparing patient records for the day when she heard eight shots. She said she hid under a counter in the lab until the gunshots stopped.

"The first two shots kind of startled me, and then a coworker came in and said it was gunfire," Priddy said.

Central Elementary School, 801 Deaderick Road, was briefly placed under lockdown this morning, as the campus is within 200 yards of the Walmart, Forrest City School District spokesman Kendall Owens told the Arkansas Democrat-Gazette.

Several other schools, including Forrest City High School and Forrest City Junior High School, are within a mile of the Walmart, but Owens said Central was the only school in the district placed on lockdown.

The spokesman said that when Superintendent Tiffany Hardrick notified him at about 10:30 a.m. of the shooting, the police department had given the all clear and the lockdown had already ended. He couldn’t immediately confirm when the lockdown began.

The retailer came under criticism for having insufficient security at the El Paso store on that day has since quietly expanded security at all its stores in the city to include an armed off-duty police officer and a security guard.

A spokeswoman for the company said in November that the hiring of off-duty officers in El Paso was not a blanket policy. It’s unclear what security measures were in place at the Forrest City store on Monday.

Check back for updates and read Tuesday's Arkansas Democrat-Gazette for full details.