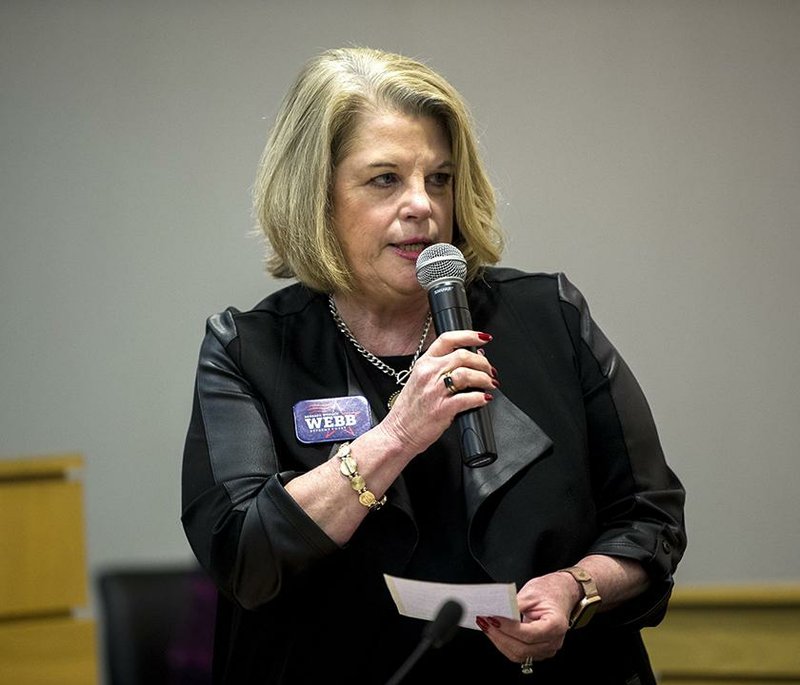 Arkansas Supreme Court candidates Barbara Womack Webb and Morgan "Chip" Welch squared off Sunday at a judicial forum in which each tried to distinguish themselves from the other while staying inside the restrictions that govern the nonpartisan judicial elections.

Under the rules of judicial elections in Arkansas, judicial candidates cannot align themselves with a political party, voice opinions on any issues that could conceivably come before the court, and cannot give their personal views on political topics.

Webb and Welch are running for Arkansas Supreme Court Position 4, currently held by Justice Josephine Hart, who is not running for re-election. Terms on the state Supreme Court are six years and the position of associate justice pays $181,860 a year.

Webb started out by outlining her experience, which she said spans more than 40 years and includes stints as a prosecuting attorney and circuit judge.

"I have tried thousands of cases across this state in our courtrooms as an attorney and as a judge, for over 40 years," Webb said, then went on to say that she is the only candidate for the Supreme Court who actively fought corruption in the Arkansas judiciary.

"I cleaned up the mess behind corrupt politicians and I restored integrity and respect to our court system, and I restored fairness to the people of my community," Webb said at the Little Rock forum held in the William H. Bowen School of Law's Friday Courtroom. "First, I was called on, and was elected three times to serve as the prosecuting attorney in Saline County, and cleaned up behind Dan Harmon."

[POLITICS EMAIL: Sign up for our daily newsletter featuring the latest updates from our team at the state Capitol and in Washington D.C. » arkansasonline.com/emails/politics]

Harmon was the prosecuting attorney for Hot Spring, Grant and Saline counties from 1979 to 1980 and again from 1991 until 1996, when he was forced to resign after facing assault charges in state court. He was then convicted in federal court in 1997 for taking drugs and money from criminals in exchange for dropped charges and sentenced to 11 years in prison. He was released from prison in 2006.

Webb, the wife of Arkansas Republican Party Chairman Doyle Webb, was elected to the prosecuting attorney position in 1996 and served in that position until 2002, when she was unseated by Robert Herzfeld Jr.

Welch, a circuit judge in the Arkansas 6th Judicial Circuit, began by telling the audience that he has more years of legal experience than Webb and he cast doubt on her assertion that she had cleaned up corruption as a prosecutor or a judge.

Welch said in 45 years as a practicing attorney, he tried virtually every kind of case there is in Arkansas, with the exception of securities cases, and that he has handled more than 8,000 cases in 7½ years on the bench.

Two questions were put to each candidate: What is one area in which the administration of justice could be improved by the Arkansas Supreme Court, and how would each candidate balance being an independent justice and an elected official?

Webb took the opportunity to take a swipe back at Welch over his assertion that she had no role in cleaning up corruption as prosecuting attorney.

"I was trusted by Democrat and Republican voters when I was elected as prosecuting attorney three times in Saline County," she said, "and, by the way, Mr. Harmon was not in prison yet. He was still running around Saline County. He actually showed up in my courts while I was prosecutor. He was subsequently indicted and convicted, so we were dealing with a lot of problems from him at the time."

Webb said the electoral process itself in judicial elections helps judges strike the balance between independence and electoral politics.

"Arkansas has elected their judges on the Supreme Court for over 150 years," she said. "It holds the judiciary accountable to the people, not to some politician and not to some interest group."

To improve the administration of justice, Webb said she would advocate more use of technology in the courtrooms.

"I brought my cellphone, because you know, we use these cellphones to shop, we use them to pay taxes, in some states they use them to vote," she said. "The courts in Arkansas need to embrace new technologies and bring new technologies into the courtrooms of Arkansas. Through the use of technology those records will be accountable, the judiciary will be accountable to the public."

Webb said the use of technology would result in greater transparency, more effective courts and lower costs to the taxpayers.

Welch then defended his remarks regarding Webb's dealings with corruption in Saline County.

"My point was that Mrs. Webb didn't prosecute Mr. Harmon," Welch said. "I have heard this speech about cleaning up Dodge City for some time, and I just wanted to make that point because some people may get the idea that in cleaning up corruption, she cleaned up corruption by prosecuting former officeholders. That's not the case with Harmon and it's not the case when she was appointed circuit judge for a year in Benton."

Welch said he would like to help implement more changes to make the courts more accessible both to people who are represented by attorneys and those who are self represented.

"We have about 3 million people in Arkansas and about 725,000 of those people qualify for legal aid," he said. "Our two legal aid bureaus ... between them, can handle less than 60,000 folks, so the rest of those people end up representing themselves, a phenomenon we end up seeing more and more of in Arkansas."

He said oftentimes in circuit court, he would hear domestic violence cases that would be brought by someone forced to represent themselves due to financial constraints.

"They've got two small children and a fat lip and they need a protective order," he said. "Or they need child support or relief from a landlord who has a lawyer."

Welch said in 99 percent of domestic violence cases, at least one person is self-represented.

"The challenge is to make the courts accessible to all Arkansans," he said. "The old saying by Abraham Lincoln that he who represents himself has a fool for a client, that's not the case anymore. It's an economic reality."

He said Chief Justice John Dan Kemp has implemented electronic filing and electronic access to information sheets, but he said that is only a beginning.

One step toward ensuring judicial independence, he said, is to get dark money -- money that is funneled through nonprofit groups that are not required to disclose their donors -- out of judicial politics. He said much of the money that comes from such entities is spent on attack ads that tend to distort a given candidate's position or record.