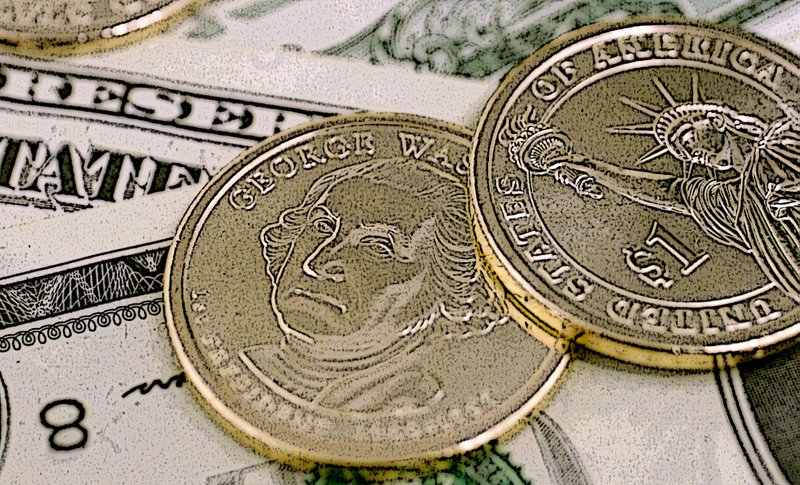 How did American money get the name "dollar"? I suspected that when the Colonies declared independence, they wouldn't have wanted to use that old British money. This was true.

"Dollar" comes from the exotic name "Joachimsthaler." In 16th-century Germany, the silver for coins came from the town of Joachimsthal. The town is now in the Czech Republic, and it's called Jachymov.

Count Hieronymus Schlick of Bohemia decided that the coins would be called Joachimthalers. I guess he could have chosen "schlicks," but maybe he was too modest. A mint was soon established in the town. The coin's name was shortened to "taler" or "thaler." People speaking English called them "dalers."

The Continental Congress didn't want to use British pounds, and the Americans chose the spelling "dollar."

I always wondered why the word ends in "ar," similar to "ulnar," "sonar" and "lunar." I haven't found an answer to that.

The name was later applied to paper money, too.

And now, I'll explain a couple of musical references that readers asked me about.

Have you heard the expression, "He's building to a crescendo"?

That's not correct. In music, the crescendo is when the volume gets steadily louder. It's from the Italian word for "growing."

When the volume reaches the peak, that's called the climax. Also, crescendo is a noun, not a verb. "The music rose in a crescendo." The orchestra doesn't crescendo.

The American Heritage Dictionary mentions that more and more people are using "crescendo" as a synonym for climax. As I've mentioned so many times, language does change. But I'm sticking with the original meaning of crescendo.

And, in case you were wondering, when the volume goes down after the climax, that's called diminuendo. I can't say I hear that word often.

Whether you love or hate bagpipes, I'm here to tell you that the tone coming out of it is called a "skirl." Yes, bagpipes have their very own sound.

The bagpipes, which date to the 1st century, are the platypus of the music world. You wonder how the parts came together. The bagpipe is concocted of reeds, pipes and bags. Alas, the bags are no longer made of animal bladders, as they once were.

I love that shrieking sound. When bagpipes are occasionally played on TV, often at police officers' funerals, I get a little weepy.

I'm not sure other instruments own a specific word. I guess stringed instruments at times "twang." But I understand that Texans twang, also.

I was trying to find the origin of "gin up."

When you get ginned up, you find the inspiration to do something. Or you spark something else. Who doesn't love it when something gins up the economy? It's short for the Middle English word for engine.

The Oxford English Dictionary does have an example of "ginned up" on liquor. But much of the time, the phrase isn't tied to alcohol.

I am both fascinated and horrified when word people get mad at each other.

I occasionally read a site called Word Detective. It's an online version of a language column by Evan Morris. He died in 2017, and I'm not sure whether the site still gets updated. Still, at one time he defined "gin up" for readers.

Many people added comments on their thoughts on the phrase.

I wasn't able to find a usage of "jin up." Has anyone else heard it spelled that way?

You probably use one or both of these words often. I hadn't thought much about the difference until a reader asked about them.

The shrimp tacos were good, though I would have preferred soft shells.

Although teal is my favorite color, I chose the red dress.

Grammar Girl Mignon Fogarty says that "although" is more formal than "though." I had never learned that.

Fowler's Modern English Usage has a few more details. "Although" is more often at the start of a sentence. "Though" can always replace although. But "although" can't always replace "though."

Handsome though he was, he had an ugly streak.

Although wouldn't work there.

And "though" when used as part of the phrases "as though" and "even though" wouldn't be replaced with "although."

It's fun when a word starts out with one meaning and ends up being used in another way.

The original definition, according to Merriam-Webster, is "a bed of soil enclosed in glass, heated especially by fermenting manure, and used for forcing or for raising seedlings."

We hear "hotbed" in lots of news stories. Here are examples from The Washington Post:

The D.C. area has long been recognized as a hotbed for high school basketball, and this winter is no different.

Silicon Valley paints itself as a hotbed of free enterprise.

Crop substitution is ... has been tried in other opioid hotbeds, such as Colombia and Afghanistan, with mixed results.

All those hotbeds, and none is related to helping seedlings grow. Times change.

Print Headline: American dollar definition a sign of our independence