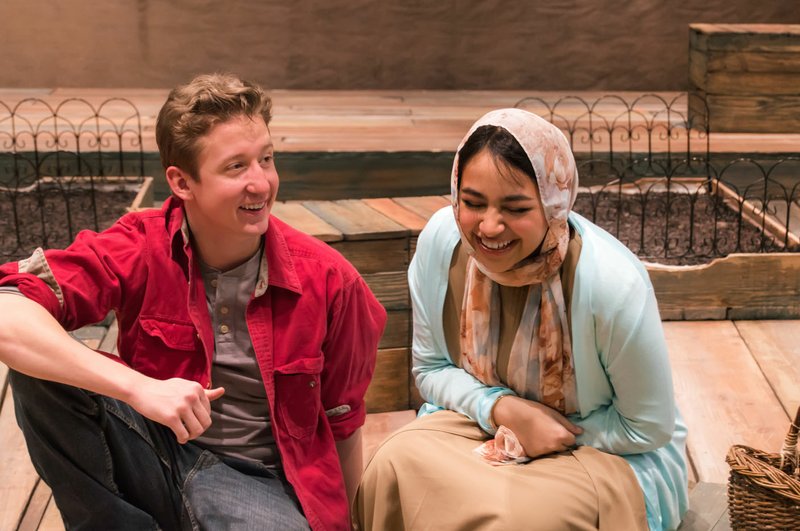 "'In The Book Of' tells a story that grapples with the most contentious argument in America today: who should be allowed to be called 'American',"notes actor Leah Smith. "What I love about this show, and all good theatre, is that it brings the audience closer to understanding both sides of the argument and empathize with why people feel the way they do. If the people as a whole can understand and relate to where the opposite sides are coming from, that is the first step to resolving our differences. It's a story that America and the world should be hearing." Pictured are Riley Newsome as Bo Jr. and Melissa Monzabi as Anisa. (Courtesy Photo/University Theatre)

One of the most divisive election years in history was officially kicked off -- with rampant chaos -- in Iowa this week. The political environment of the United States is as polarized as it's ever been. In other words, it's perfect timing for the University Theatre's production of John Walch's "In the Book Of," a show that deftly illustrates the complicated layers beneath one of the controversial topics -- immigration -- that continues to roil our country. The fact that it showcases a cast of strong actors in the process is a bonus.

Director Michael Landman -- who took on last year's "Clybourne Park" -- says it's no coincidence that he's signed on to direct politically relevant pieces for the past couple of years.

"When I direct, I first must fall in love with the play itself," he says. "And after that, yes, the thematic similarities are not a coincidence. With such significant challenges and tensions in our country right now, I'm passionate to create theater that encourages dialogue and the possibility of change. 'In the Book Of' has characters who are in pain and fearful, leading to judgment, isolation and violence. It asks, 'Can we see each other as human beings first and embrace the possibility of peaceful, joyful coexistence?'"

Inspired by an ancient story -- the Bible's Book of Ruth -- the plot is incisively current. In Walch's retelling of the biblical tale, Naomi, a soldier who served in Afghanistan, feels the tug of loyalty for her Afghan interpreter, Anisah, when it's time for her to return to the United States. Walch's play has proven to be remarkably prescient: Written in 2011 and inspired by that year's passage of Alabama House Bill 56 -- widely considered the harshest anti-immigration bill in the nation, which, among other things, required public schools to report suspected illegal immigrant students and criminalized the transporting and hiring of suspected illegal immigrants -- the script's subject matter has only become more relevant under the strict federal immigration and refugee policies of the current administration. Despite legislation passed in 2008 in an attempt to allow Iraqi and Afghan interpreters entry into the U.S. to avoid retaliation in their own country for working with the U.S. military, fewer and fewer have been granted special visas in the intervening years. The International Refugee Assistance Project estimated that, in 2014, an Afghan interpreter was being killed every 36 hours.

In the current context, then, Naomi's obligation to make sure Anisah escapes peril for assisting her during her time in Afghanistan takes on an even greater urgency than it did when the play was first produced. Aware of the danger of leaving behind her friend, Naomi pledges to bring Anisah back to her hometown in Mississippi.

"Be prepared -- some people will hate you," she warns Anisah of her hometown, where dire economic straits have inspired some to look for scapegoats to blame for the downturn in the economy. Indeed, the next scene opens on Gail, Naomi's sister-in-law, delivering a powerhouse speech to declare her candidacy for mayor of the small Southern town, her raw, passionate manifesto as laced with xenophobia as it is with humor. (Walch often tempers the serious subject matter of his play with well-placed and warm-hearted humor, humanizing his characters and offering his audience a break from the heavier material.) Gail, a brusque woman whose "shocking lack of sensitivity" is referenced more than once in the script, is played by UA graduate student Leah Smith, an immensely likable actor who skillfully navigates the tricky waters of a monologue that could make less talented actors seem unsympathetic.

"As an actor, it's crucial that whatever role you are cast in, you do not judge your character," notes Smith. "Gail holds some personal values that do not align with my own, but she also has plenty that do: family, love, strength, hometown pride. Instead of focusing on all the ways this character may be different from me, I've approached this role by highlighting the similarities this woman from the South shares with me and most individuals: familial loss, job insecurity, changing landscapes, fear of the unfamiliar. Gail speaks from a place of passion and honesty because she truly cares about her home and family. Once you can see where someone is coming from, the differences between you seem much more minute."

"[Leah and I have] explored how Gail's recent, tragic life circumstances led to her becoming fearful and overly protective of her family, community and country," says Landman. "She'll do anything for them. Leah has embraced the depth of her character's love, as well as her need to survive and protect, and takes action to make that happen."

And that, then, is the biggest strength of Walch's script: He humanizes both sides of a controversial issue that pits sister against sister, parent against child, American against American, offering the audience a chance to see beneath the heated political rhetoric to the very real, very vulnerable issues simmering under the surface -- something that happens so rarely in our politically polarized world today.

"As a writer, I want to keep everyone in the audience in the same room," says Walch. "It's easy to vilify, it's much harder to empathize. For me, this is a play about our response to loss. All the characters, including Gail, are in relationship to catastrophic loss (loss of ... immediate family members, job security, faith in our government, community, sense of home). The characters' response to these losses is central to the play as each asks, 'Do I turn inward or outward? Do I close down or open up?' When we encounter 'the other' (whether that be a person, or a concept or a different flavor of ice cream), I believe we all are confronted with this fundamental question: 'Do I push away the unknown or do I embrace it and make room for something new?' I believe this tension is the foundation of our current political debate. I wanted to respectfully dramatize characters on all points of the spectrum, as I'm less interested in the political conversation than I am in the in the human conversation."

The award-winning Walch is now serving as the head of the UA MFA Playwriting Program, giving UA students an opportunity to have the playwright on hand as they move through the production process.

"I still go through the process of discovering my character, but if there's ever some insight that I am missing or when I was stuck in the timeline of Naomi's backstory, it was great having John there because I could ask him those questions," says actor Taylar Hasberry, who plays Naomi, the returning soldier.

"It is a rarity to have the playwright directly involved in the creative process with you, but it's one that I wish every show had," says Smith. "Once the play is published, it's left up for interpretation by the director, actors and designers. However, by having John Walch on hand, we can be sure that the decisions we are making in this production are honoring his original intent, while also being able to ask permission when to bend the script's boundaries. I feel a great benefit having the one responsible for such a beautiful story directly involved in the end product."

Landman says he first met Walch 20 years ago, when he saw production of two of Walch's plays in Austin, Texas.

"He's gifted in his ability to poetically explore the deeply personal side-by-side with the global, as well as touch our hearts and minds -- and make us laugh! And now, 20 years later, here we are both teaching at the U of A, and I'm delighted to (finally!) have the opportunity to collaborate together."

All signs point to the fact that we're in for a contentious election year -- and it's just getting started. Seeing "In the Book Of" might just be the most effective way to prepare.