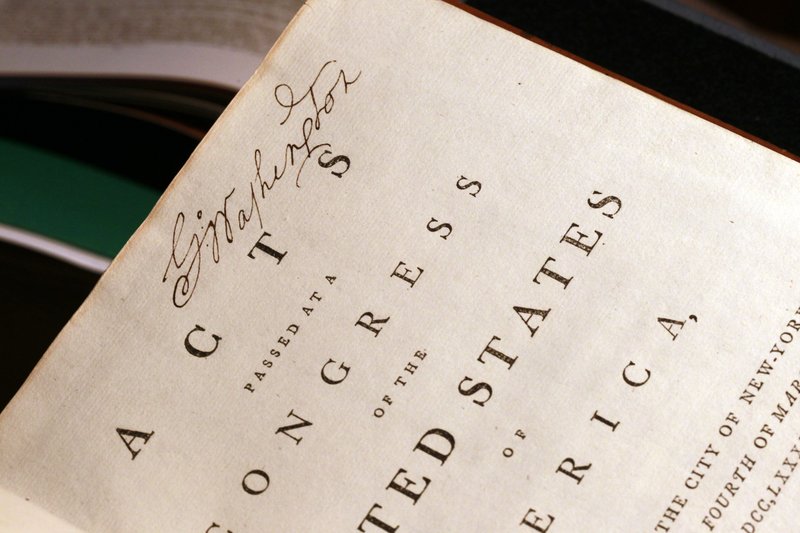 FILE- In this June 12, 2012, file photo, George Washington's signature is seen as Chris Coover, senior specialist for Rare books &amp; manuscripts at Christie's shows President George Washington's personal copy of the Acts of the first Congress (1789), containing the U.S. Constitution and the proposed Bill of Rights, during a media availability in Washington. Immigrants who want to become United States citizens must go through a long list of requirements, including passing a civics test. (AP Photo/Alex Brandon, File)

If not for the magnificence of its Constitution, the United States of America very likely would be unremarkable in the annals of political history.

Written and rewritten over the course of 116 days in 1787 by incredibly wise men studied in the histories of how nations have been governed and notions about the rights of mankind, the document still had not settled important questions of how a people to be known as Americans would operate as one nation.

It wasn't until four years later, and the creation of 10 amendments meant to outline certain basic individual rights, that the Constitution earned enough support from the states to takes its place as the foundation of a new nation's legal framework.

Today, more than 228 years later, the document remains worthy of celebration for the kind of nation it has perpetuated. But it wasn't perfect: It's been amended 27 times, first by those 10 changes known as the Bill of Rights and the latest in 1992, in an amendment adjusting how compensation for members of Congress is handled.

As the very heart of our democratic republic, the Constitution and its application to modern life remains, and forever will, a source of controversy. We're a nation today of 50 states, one federal district and 14 territories, and it is a constant work to figure out how the Constitution's powers, and limitations on power, apply in a world of smartphones, advanced machinery and shifting social mores.

We find ourselves here in 2020 with some advocates for a particular part of the Constitution -- the Second Amendment -- suggesting that the Constitution itself is not strong enough to do its job. It needs the help, they say, of county government, namely the 15 justices of the peace elected mainly to ensure county roads are maintained, county jails are operational, courts are capable of meting out justice and county and state laws are enforced.

Scott County is the first in the state to declare itself a "Bill of Rights sanctuary," apparently borrowing a much maligned tactic from immigration activists who have convinced some government bodies to give "sanctuary" to people who are illegally in the United States. In the case of immigration, some cities and counties have declared they will not participate in any actions that would help federal officials enforce the nation's immigration laws.

Now, gun rights advocates have conjured up a notion that individual counties can define for themselves what the Second Amendment means and can ignore any federal or state laws in conflict with their localized interpretation of the U.S. Constitution.

Benton County might be next. Libertarians there have launched a push for a Bill of Rights sanctuary proposal that, according to one advocate, "will protect the citizens of Benton County from government infringements on their protected rights and ability to protect themselves." Another supporter said it would "enforce the Bill of Rights."

It's not that we don't take the Second Amendment seriously. Indeed, we take it as seriously as the First Amendment. In neither case do county justices of the peace get to appoint themselve arbiters of what the amendment either means or doesn't mean.

We'd like to ignore such cockamamie proposals, because giving them more ink (or maybe we should say "pixels" these days) makes them appear serious. They're not, or more accurately, they shouldn't be.

But they seem important to folks eager to do anything -- ANYTHING! -- to establish a firebreak in what they view as a growing wildfire of anti-gun sentiment. When someone bent on violence uses a gun to kill mall shoppers, church, synagogue or mosque members, school kids, concertgoers or people just trying to watch a movie, a shudder of fear and defiance runs through gun advocates who trust no government intrusion affecting their access to guns. Perhaps as an extension of a gun culture attitude that they must take matters into their own hands, some of these Second Amendment advocates show little faith that the nation's founding document is strong enough to survive a national discussion about how to stem the tide of mass murders.

Virginia has gun advocates nervous. There, Democrats in control of both lawmaking houses and the governorship have pressed forward on gun control measures after a shooting there left a dozen people dead. The changes advanced include universal background checks and a ban on what's called assault weapons as well as high-capacity magazines and silencers.

Counties are subdivisions of the state. In other words, a county can't dictate to the state the way the state can dictate to Arkansas' 75 counties. Imagine the chaos if every county -- or city for that matter -- decided it could determine which state and federal laws apply. Such an attitude would extend far, far beyond the Second Amendment, and quickly.

"At face value, these proposed ordinances apear to be in line with the traditional notions of our historical rights as citizens," attorney Mike Rainwater wrote to county judges recently. "But these proposals go much deeper. The real effect is to set the county in opposition to the constitutional system that has served us well for 200+ years."

But it's an election year in a politically divided nation in which many Americans feel they can't have an impact on federal policies. So what's the next option? Let's "decide" federal issues on the local stage.

Here's the problem: You can't get all patriotic about Making America Great Again if your actions deny the very foundation of these United States of America.

Nothing about America's great experiment in democracy suggests counties hold supreme legal authority in the enforcement of the U.S. Constitution. Wait a minute ... it's not even that. What they're suggesting is enforcement of their localized interpretation of the U.S. Constitution. The nation has more than 3,000 counties. Are we to advance the very unAmerican idea that the Bill of Rights means more than 3,000 different things?

And what do we do when a county declares the Second Amendment means nothing and can be ignored? Are we to honor that local government's interpretation, too?

These county-by-county gun rights sanctuary proposals represent a threat to dismantle the America forged by our forefathers. By trying to enforce local ideas of what being an American means, advocates for these proposals are effectively taking an eraser to the founding document of the United States that they usually hold sacrosanct.

Reasonable people, of which we hope there still are some in local governments like our quorum courts, should reject a mentality that attempts to negate the very pillars of our nation.

Local ordinances that attempt to diminish or eliminate the powers of state and federal governments run counter to the very Constitution gun rights advocates say they want enforced.