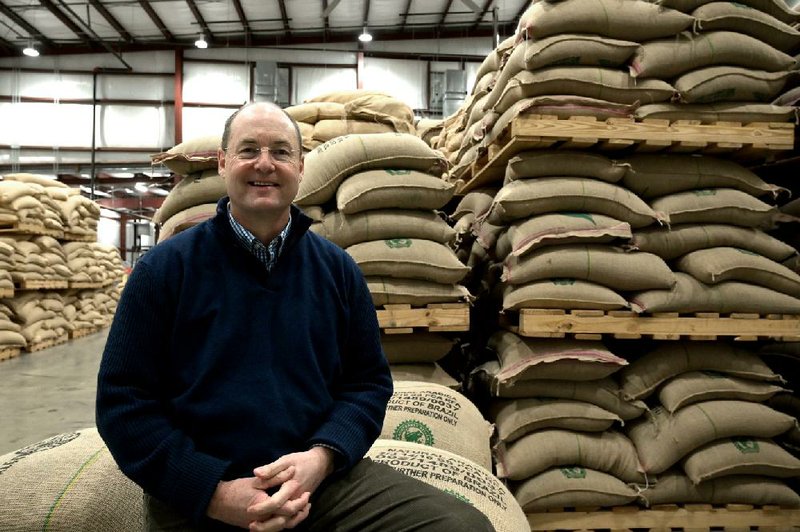 Scott Ford is ready to kick-start consolidation of the coffee-roasting industry.

The Westrock Coffee chief executive officer knows the formula for success: He deployed it to build Alltel into the nation's fifth-largest wireless provider, and he plans to bring the same approach to consolidate the coffee-roasting and packaging business.

Central Arkansas is in line to benefit from the efforts.

That blueprint begins with establishing the scale and scope needed to produce efficiently, price competitively and expand operations. And it includes building a first-class leadership team skilled at evaluating potential acquisitions and growing the customer base.

In 1998, as chief operating officer of Alltel, Ford led the acquisition of 360 Communications, a Chicago company that was three times larger than Alltel and included a management team experienced in competing in the wireless industry.

The $6 billion deal turbocharged growth, immediately propelling Alltel from a small player in the wireless industry into a super-regional wireless provider.

Once a solid platform was in place, Ford led Alltel through an aggressive acquisition campaign, buying up wireless companies large and small to fuel the company's growth.

A decade after the 360 acquisition, Alltel had about 14 million wireless customers, and it had almost 3,000 employees in Pulaski County alone.

"The 360 deal allowed us to build a platform at Alltel to roll up other wireless companies," Ford said. "The S&D transaction will do the same, hopefully, for Westrock in consolidating the coffee business. There are thousands of providers in the nation, many of them family-owned, that could be added to our portfolio."

S&D has more than $600 million in revenue, 1,400 employees and a seasoned management team led by a CEO who has been with the company for 41 years. Ron Hinson will join Westrock in an advisory role as chairman emeritus while Ford runs the business as CEO.

Along with Hinson, Ford will be active in recruiting other S&D leaders and encouraging them to stay on board. "They are a much bigger company than we are and have the personnel and infrastructure in place to help build a strong company," Ford said.

Judging by Ford's history of integrating management teams, S&D leadership can look forward to a warm welcome and career-growth opportunities, according to former 360 executives who joined Alltel and went on to even greater career success.

Windstream CEO Tony Thomas was running a small accounting team in Chicago for the 360 wireless business when the acquisition was announced on St. Patrick's Day. After participating in meetings with Alltel executives in Chicago and Little Rock, Thomas along with about 100 other 360 leaders was offered a position at Alltel's Little Rock headquarters.

"I never expected to get an opportunity in Little Rock, and when they offered me one, I was literally stunned," Thomas said, noting that Ford led a well-orchestrated recruiting process and he lived up to his vows to rely on the 360 team's expertise to help expand Alltel.

"Scott gets a tremendous amount of credit for setting the culture; that willingness to bring new people into the organization," Thomas said.

"Initially, at the time, I did not see his full transformation plan. With hindsight, it's really apparent that this was the first step into moving into the wireless business and making sure that he had the right executive team in place that could boldly execute on that vision."

Kevin Beebe was executive vice president running wireless operations at 360 when the company was acquired. He joined Alltel in the same role, eventually becoming president of the wireless business. Today, he is co-founder of private equity firm Astra Capital Management and a board director at Frontier Communications.

The S&D team should find opportunities at Westrock under Ford's leadership, Beebe said. "Scott is great at communicating his vision for the business and encouraging people to partner with him," Beebe said. "When he talked to the 360 team, it was always about a partnership -- not working for him but partnering with him."

Beebe and Thomas both noted that Ford excels at integrating executive teams and is passionate about learning from an acquired business. "Anyone at S&D who is really interested in an opportunity and understands the business will find success in partnering with Scott Ford," Beebe said.

Acquiring 360 gave Alltel a quick boost to expand its wireless business, and Ford predicts the S&D purchase can do much the same for Westrock.

"This allows us to build a platform with a great team to continue growing the business," he said. "We're going to have a solid operational base and scale and a great talent pool. Hopefully, we can go on a journey that will allow us to add other businesses to the portfolio over the next several years."

Ford estimates there are more than 2,000 roasting companies in the U.S., many of them small family-owned businesses.

Consolidation of coffee roasters could be modeled after the craft-beer sector, where thousands of small local breweries were developed before being purchased by larger beverage companies, said Matt Barry, an industry analyst with Euromonitor International. "That would be a model for what could happen in coffee roasting," Barry said.

S&D is a good foundation to pursue other acquisitions. "They are a significant player in American coffee," Barry added.

"The main trend driving consolidation is that coffee needs to be everywhere," Barry said, noting that successful providers will have strategies to address various segments, including the retail, office and food-service channels. "Consolidation will help companies reach consumers in all these different areas," he added.

Westrock also appears to have access to a steady source of financing to help fund mergers and acquisitions. The Stephens Group of Little Rock was an early investor in Westrock and helped fund the S&D acquisition along with Brown Brothers Harriman & Co.

The New York firm is the oldest and one of the largest private banks on Wall Street. It was founded by W. Averell Harriman, a businessman who served as Commerce secretary under President Harry Truman and was governor of New York, and twice was a candidate for the Democratic presidential nomination.

"Food and consumer products is one of our key verticals of investment focus, and we are excited to be a part of the leading integrated coffee company and support their growth and expansion, especially one located in our backyard."

North Little Rock Chamber of Commerce President and CEO John Owens notes the similarities between Alltel's blueprint and the growth plan Westrock has in place.

"Scott Ford and his team are taking the same formula for success that worked at Alltel and are applying it to the consumer products industry," Owens said. "What they have accomplished is simply amazing."

From the beginning, one primary objective at Westrock was to build a business that could establish a corporate headquarters in Little Rock, Ford said.

While the S&D purchase delivers a management team experienced in the coffee industry, Westrock will have to build out corporate support teams in key areas such as human resources and benefits, accounting, and finance and legal. That work today is provided by S&D's corporate parent, Cott Corp. of Canada.

Central Arkansas stands to benefit: Those teams will have offices at an expanded Westrock corporate headquarters in Little Rock. "We'll have to build out all those key functions, and that will be done over time here in Little Rock," Ford said. "We already have plans to add office space and expand our facility in North Little Rock. We'll start with that and go from there."

"Our goal was to build a business we could be proud of and that would contribute to the growth of Central Arkansas," he added. "Building a corporate headquarters of significant size here was always on our minds. We now have a platform to help us do that."