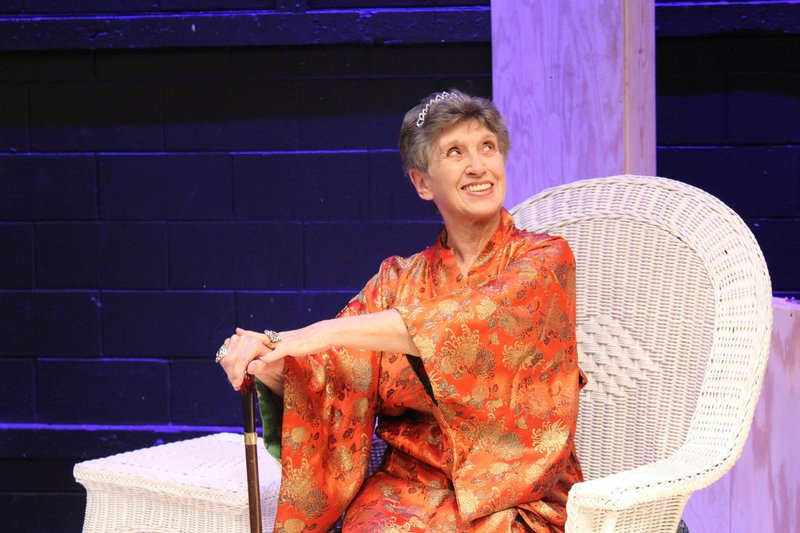 Angela Covey plays Trudy Tromaine, one of the Sisters of the Gleam and Sparkle, in the Fort Smith Little Theatre season opener, "The Glitter Girls." Covey has been involved with FSLT since 1975 and, though she has said it before, this play will truly be her swan song, she says. She is retiring to the audience side of things after this production. (Courtesy Photo/Meghan Partain for FSLT)

One cannot simply walk in off the street and direct a show at Fort Smith Little Theatre. The community company, marking its 73rd season this year, has a formula that clearly works. Would-be directors must work their way up through the ranks -- stage managing, assistant directing, producing -- before they're cleared to fly on their own.

Once deemed ready, a director may submit a show for the next season to the Production Committee, explains Eric Wells, this year's production chairman. Then begins the complicated process of selecting a variety of shows that will please all the potential playgoers in the River Valley.

"We really try to find the perfect balance of different genres," says Wells, explaining that experience tells committee members that the season needs to open strong and close strong.

"We need something big in those spots, something exciting and fun," he says, pointing to last year's comedic opener, "Happy Ever After," and the classic closer, "Miracle on 34th Street." In between, there's room for a dark comedy or drama -- last year, it was "The Graduate"; a family-friendly musical -- last year was "Beauty and the Beast"; and something less well known or more experimental; wrapping up with something guaranteed to sell season tickets for the coming year.

"We don't want to play it too safe, but at the same time, we don't want to be too daring," Wells muses, laughing. "Last year, we did 'The Graduate' and 'One Flew Over the Cuckoo's Nest," and we got some complaints. But how are we going to bring new generations in if we don't take some chances? We don't want to be stuck in the same revolving door."

This year, Wells directs the first show of the season, which he chose based on last year's success with "Happily Ever After." Having developed a taste for playwright Mark Dunn, Wells went looking for another laugh-out-loud script and found "The Glitter Girls" -- which he describes as "Steel Magnolias" meets "Survivor." The premise is that a group of older ladies -- the Sisters of the Gleam and Sparkle -- has gathered at the bedside of a dying member, who wishes to bequeath $16 million to one of them.

"Secrets and scandals are revealed, and some of the Sisters seem to be willing to do anything to get the money," Wells says. "I giggled when I read the script, but on stage, it's a riot!"

Wells, who by day is a financial analyst for Mercy Hospital in Fort Smith, says attending an FSLT show should be an easy fiscal choice, too.

"You don't have to drive to Fayetteville or Tulsa, you can support your local artists -- who are just as talented as anyone in Hollywood or on Broadway -- and you don't have to pay $60 for a ticket at the civic center," he says. "We do have our limitations, but we make it work. And it makes it more fun seeing what challenges we've overcome!" 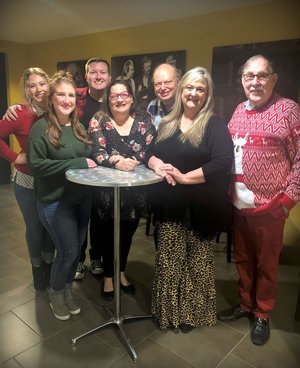 “The Glitter Girls” — A social club for aging Southern belles is convened by its richest member, who is supposedly at death’s door. It is her plan to bequeath some of her millions to one lucky Sister of the Gleam and Sparkle, but the members themselves must decide who will receive the big bundle. Scheming and skeletons come to light in this feel-good comedy that’s “Steel Magnolias” meets “Survivor,” Feb. 13-16 & Feb. 19-22. Directed by Eric Wells.

“A Southern Exposure” — Raised in Kentucky by her grandmother, Hattie, and two eccentric aunts, Callie stuns her family by moving to New York to live with her new boyfriend. Her dreams are soon dashed, then just as her world starts to brighten, she is forced to return home where she and Hattie discover the fiercest kind of love, April 16-19 & April 22-25. Directed by Lora Rice.

“Deathtrap” — A famous playwright, struggling with a string of failures, sees a student’s script as a potential Broadway smash. Can he resist the temptation to knock off the author and present the play as his own? Full of twists and turns, this comic thriller played on Broadway for four years and was an acclaimed 1983 film, June 4-7 & June 10-13. Directed by Micki Voelkel.

“Annie” — With pluck and positivity, little orphan Annie charms everyone despite her start in a New York City orphanage. She escapes to search for her parents and tumbles through fun-fulled adventures, eventually finding a new home and family with billionaire Oliver Warbucks, his secretary, and a mutt named Sandy, July 30-31, Aug. 1-2, Aug. 5-9 & Aug. 13-15. Directed by Valerie Valentine and Eric Wells; music directors, Barry and Gini Law.

“The Tin Woman” — Having received a heart transplant, a young woman is unsure whether she deserves this second chance. Questioning life’s unexpected events, she tracks down the heart donor’s family. Based on a true story, the script uses humor and pathos to explore loss, family and what it means to be given new life, Sept. 24-27, Sept. 30-Oct. 3. Directed by Jim Moody.

“Parfumerie” — A warm romantic comedy that follows the tangled tale of Parfumerie employee George. After being fired in a case of mistaken identity, he discovers that the stranger he has fallen in love with through secret correspondence is a co-worker with whom he constantly feuds. Only the truth can lead to a happy resolution, Nov. 12-15 & Nov. 18-21. Directed by Jamie Lambdin-Bolin.

Print Headline: A Season That Glitters