Today's Paper Obits Digital FAQ Newsletters Local Elections Movie Style What's Up! in NWA Crime Razorback Sports Today's Photos Puzzles
ADVERTISEMENT
The big thaw: What to do when your freezer loses power The next time your freezer loses power, don’t panic. These food safety tips can save you. by RACHAEL JACKSON The Washington Post | February 8, 2020 at 1:40 a.m. 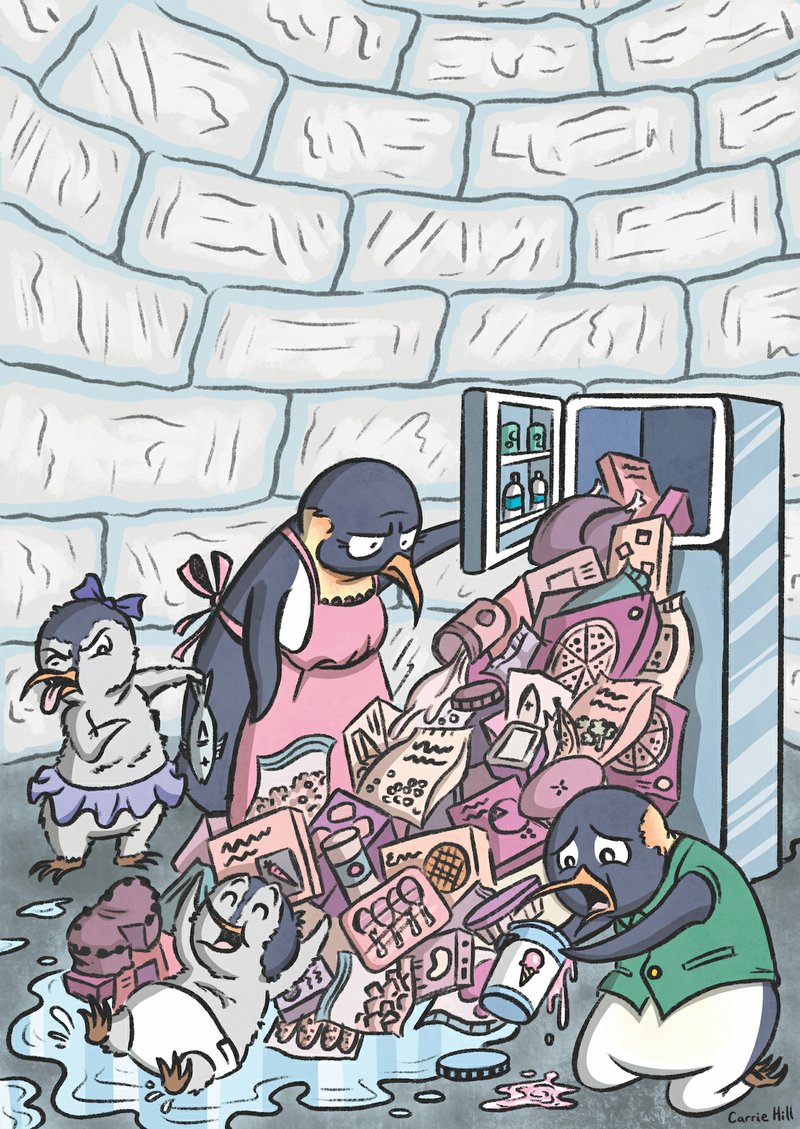 After a week away, I was boarding a bus back home when I got a terrifying text from my husband.

The good news: Everybody was OK.

He attached a video.

In it, I saw our kitchen. I heard angry beeping. He panned to the freezer, which was crying in pain because it had, apparently, horrifyingly, been left open for a very long time.

The freezer! My icy treasure chest of leftovers, of bread for toasting, of orange peels for candying; of frozen vegetables and fish; of my sister-in-law's cherry chocolate cake and my mother-in-law's eggnog kugel. The frozen 7.04 cubic feet of my edible hopes and dreams. Was. Open.

When food rises above 40 degrees Fahrenheit, it enters what is commonly referred to as the "danger zone" — a range (up to 140 degrees) where bacteria rapidly proliferate, potentially to levels that can sicken people. I freeze lots of food to avoid waste and save money and time. Now, foodborne illness aside, the thought of dumping everything made me feel sick.

I tried to focus on facts: We learned that our cat sitter, in a last-minute ice cream grab, left the freezer ajar 10 hours before my husband returned from work travel to lots of beeping and a stash of squishy food. We were pretty sure the freezer started around the recommended 0 degrees Fahrenheit. But after that, we had no idea. Had the food been in the "danger zone" too long? Did we really have to throw everything away?

I was angry. I was sad. I was in denial. I bargained. "Maybe a lot of it is OK," I told myself one minute, only to imagine gastrointestinal disaster the next. On my path to acceptance, I learned all I could from food safety experts, ultimately concluding that, while some food was salvageable, I couldn't stomach the risk of eating the rest. So, the frozen wreckage landed in the compost, and I studied up and invested in some tools to avoid future losses.

Just in case you ever find yourself facing a power failure, a broken appliance or a door accidentally left ajar, consider my takeaways below. If the coldest place in your house stops being cold enough, these might save you a little grief.

• Temperature evaluation is key. First, determine how much the food warmed. Anything with visible ice crystals is probably fine, according to the U.S. Department of Agriculture. Otherwise, if you have a food thermometer, Rutgers University microbiologist and food scientist Don Schaffner suggests testing the surface of the warmest item.

"If the foods were 40 degrees or less in the freezer, then you simply close the door and walk away," he said, noting that even if the food is safe, thawing and refreezing could affect its quality.

If the food is above 40 degrees, Schaffner suggests working in layers. The warmest food probably needs to be tossed (more on what's salvageable below), but if the next layer registers below the "danger zone" temperature threshold, it's probably OK. Government guidelines advise consumers against eating perishable foods left outside proper refrigeration for more than two hours.

• Heating food doesn't eliminate risk. To get sick from bacteria such as salmonella and listeria, you need to ingest the living organisms (yech). But when certain bacteria proliferate, as they could have in my warming freezer, they create heat-stable toxins. So even if the microbes themselves are killed in the oven or microwave, their toxins can still sicken you, USDA food safety specialist Archie Magoulas told me.

• The food might be fine, but it's way riskier to eat. Dangerous bacteria don't spontaneously appear on every morsel of food that's warmed past 40 degrees, Schaffner noted. Much of our food is pathogen-free, but some of it may be contaminated with low concentrations of pathogens that might pass through our systems without incident. When it comes to a temperature control failure like mine, those low concentrations can grow into real threats. You have no way of knowing, so always err on the safe side.

• Certain foods, such as breads, are less hospitable to pathogens. Harmful bacteria need water to grow. While cakes, pastries and jams contain water, it's usually bound up so bacteria can't use it. Slow-acting molds, not bacteria, are more likely to spoil these "low water activity" foods. "That will be overt visual spoilage," Schaffner said. "So you'll know those are a problem because they'll change colors and they'll be fuzzy." (I ate our defrosted naan and doughnuts with no regrets.)

Alcohol and acids also inhibit bacterial growth, but each food is different. FoodSafety.gov offers guidance for foods ranging from lunch meats (discard if above 40 degrees for more than two hours) to opened, vinegar-based dressing (generally OK, even if the fridge was left open).

• Tools can remove the guesswork. After going through the painful process of throwing away all my efforts to avoid waste (Goodbye, salsa! Goodbye, curry! Goodbye, tater tots!), I discovered these tools:

Food thermometer. To check individual foods, Schaffner recommends a digital thermometer with a sensitive tip (the same type you'd insert into meat to ensure safe cooking), which should give a reading in seconds. I now have a Comark.

Appliance thermometer. Refrigerator and freezer thermometers, best stashed near the faster-warming doors, can provide additional temperature intel, and some will even sound if temps rise too much. In 2017, Cook's Illustrated tested thermometer alarms and gave top marks to a data-logging model from ThermoWorks. (Some refrigerators, like mine, also come equipped with open-door alarms.)

Phone alerts. We went next-level and ordered a SensorPush system, which pings our phones when temperatures rise. I set it conservatively and now my husband jokes that the fridge texts him more than I do.

• Power failures. During a power failure, keep refrigerator and freezer doors shut to conserve cool air. According to the USDA, an unopened fridge will safely chill for four hours. A full freezer will hold for two days, while a half-full freezer will get too warm after just one. The food "acts like a big block of ice," Magoulas, of the USDA, said.

• Forgotten food can become wasted food. While a full freezer can last longer in a power failure, that's only valuable if you actually eat the food. And, oh, I had plans! I daydreamed about our Chinese leftovers, schemed to turn leftover artichoke dip and random vegetables into a pasta dish, awaited the rainy day when we'd dig into the carrot cake. But, to my embarrassment, the freezer was also filled with mysteries. How old, exactly, was that sesame tofu? How had we forgotten about the romesco sauce? Was I really going to candy all those frozen orange peels?

Assuming it stays frozen, food won't become unsafe, but its flavor eventually deteriorates. How many nights, I wondered, had I made a fresh meal, when I could have reached farther into the freezer for something faster and just as good? Ever since the Great Freezer Disaster of 2019, I've tried to be more proactive about consuming our frozen goodies.

Sorting through the wreckage of a freezer failure was a draining experience. So much money, time and resources lost to the theoretical risk of bacterial invasion. I'm sure I tossed some things unnecessarily (the corn cakes at the very back were probably fine) and may have unwisely gambled (but it was flourless chocolate cake!). Ultimately, I made peace with composting most of the freezer's contents, telling myself it was an expensive lesson.

I never want to repeat this experience, but at least I feel more prepared. Plus, now I can use my phone to check the freezer's temperature from bed, so, silver linings.

For more specific guidelines, check out the USDA's Freezing and Food Safety fact sheet and FoodSafety.gov's guide to food safety during a power failure.