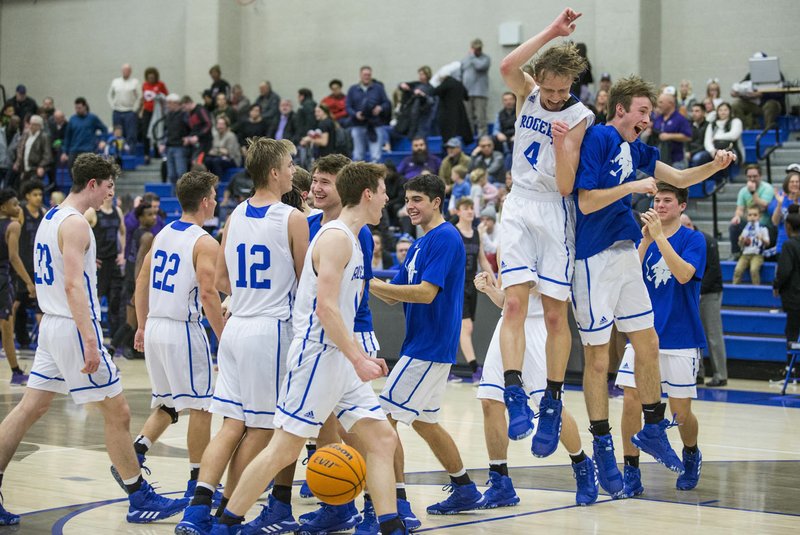 ROGERS -- Rogers High coach Lamont Frazier acknowledged his team doesn't have a match for 6-foot-6 Tamaury Releford, so he wanted to push the pace Friday night.

But the Fayetteville big man along with several teammates struggled with foul trouble and the Mounties' defense held tough late to earn a 61-48 6A-West Conference win in King Arena.

Rogers (15-7, 7-2) jumped to a tie for second with the Purple Bulldogs but now owns the tiebreaker with the season sweep.

Fayetteville pulled within 50-44 on a lay-in by Releford with 4 minutes, 6 seconds left in the fourth quarter. But the Mounties held the Purple Bulldogs scoreless for more than three minutes and pushed the lead to double digits.

By the time Releford, who had a team-high 12, scored again with 51 seconds remaining the hill was too much to climb.

The Mounties picked some easy baskets and fouls at times pushing the pace. That was definitely by design, Frazier said.

"We're better when we can run up and down the floor," Frazier said. "That's one of those things in the back of your mind. We don't have an equalizer for Releford, and so we have to do the next best thing, and that's get down the floor as fast as we can."

Frazier came away from his team's afternoon shoot-around optimistic.

"I thought we were focused," Frazier said. "They showed some maturity and pulled it off.

"We have to compete every night. We're not blessed with a lot of talent 1-10, so we have to do it as a group. Every last guy that played tonight played their butt off."

Elliot Paschal led all scorers with 18 points, while Will Liddell added 13 and Drew Miller 10 for the Mounties. Releford was Fayetteville's only player in double figures.

Rogers had struggled the foul line at times this season but made its first 16 before missing and finished 24 of 30. Fayetteville managed just 4 of 11.

Rogers took a double-digit lead into halftime thanks to a similar late dry spell by Fayetteville. The Purple Bulldogs were held scoreless for more than three minutes to end the first half, going 0-for-5 from the foul line in that time.

The Mounties scored the final six of the half and led 30-20.

The Wildcats took over sole possession of first place in the 6A-West as Lawson Jenkins scored a game-high 20 points.

Nick Buchanan added 14 points for Har-Ber, which held a double-digit lead for most of the second half.

Van Buren held a 16-13 halftime lead then picked up the offense and handed Bentonville its second straight loss in 6A-West play.

The Pointers (8-13, 2-7) outscored the Tigers 14-9 in the third quarter and stretched their lead to a 30-22 margin, then held on when Bentonville scored 24 points in the fourth quarter.

Avery Salisbury had 12 points to lead Van Buren while a trio of players -- Damarius Newton, Brayden Gilmore and Gary Phillips -- each scored 10. Harrison Hicks had 15 points for Bentonville, while Brayden Freeman chipped in 11.

Springdale (10-11, 3-6) grabbed an early lead and led by double digits until West rallied in the second half before the Bulldogs sealed the win at the free-throw line.

Jordan Owens led the way for Springdale with 17 points. JP Hignite added 13 including three 3-pointers, and Domnique Hertin finished with 10.