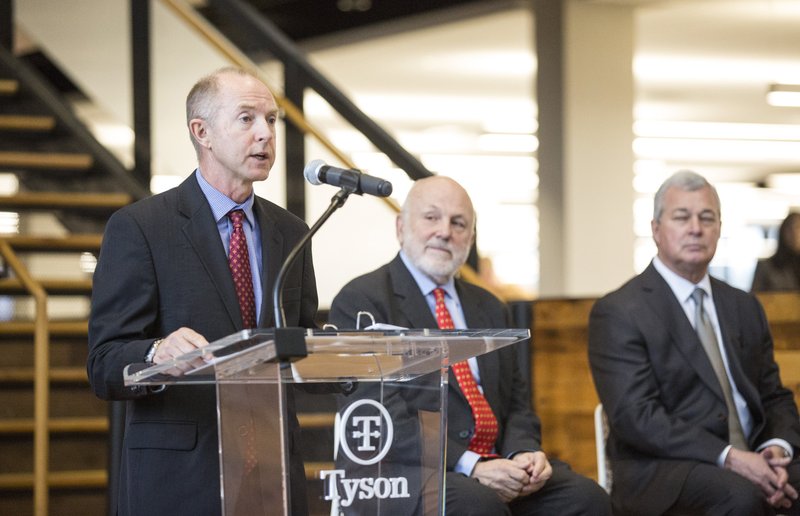 "Our overall first quarter was in line with expectations," said Chief Executive Noel White on a morning conference call with securities analysts. After the call, Tyson held its annual shareholders meeting in Springdale.

Despite overall sales and income growth for the quarter, results were mixed on Wall Street. Tyson also announced plans to eliminate about 500 jobs.

Sales rose 6% to $10.8 billion for the period compared with $10.2 billion in the first quarter of 2019. Beef and chicken sales represented two-thirds of Tyson's total revenue.

Meanwhile, chicken and prepared foods income fell 64% to $57 million and 40% to $158 million, respectively. Tyson said weaker-than-expected chicken prices, along with an $80 million increase in raw materials for prepared foods, lowered profits in the quarter.

International sales rose to $498 million, compared with $143 million a year ago, when acquisition results for a few chicken processing plants in Europe and Thailand were recorded.

Beef sales declined 2% to $3.8 billion. Prepared foods sales were unchanged compared with the first quarter of 2019.

Alan Ellstrand, associate dean of the Walton College of Business at the University of Arkansas, said things are moving in the right direction for Tyson. However, the prepared foods and chicken businesses stood out in a not-so-good way.

As Tyson's beef, pork and prepared foods businesses saw higher operating margins compared with last year, the company's chicken margins were slashed. They were 1.7% compared with 5.1% a year ago.

"That's a big drop," Ellstrand said. "It demonstrates the importance of being diversified in this industry."

Tyson also took on a total of $68 million in one-time, pretax charges. According to the report, Tyson spent $52 million, or 11 cents per share, on "restructuring and related" costs, as well as $16 million, or three cents per share, on costs related to a fire that destroyed a large beef processing plant in Holcomb, Kan. After months of rebuilding, White said the plant is "now back to full operations."

Adjusted for those costs, Tyson posted earnings per share of $1.66 compared with $1.58 last year. The acquisition of Keystone Foods ate into the first quarter of 2019, resulting in charges of $26 million, or six cents per share. Tyson also had an $8 million, or 2 cents per share, restructuring charge for the quarter that year.

In a research brief, analyst Ben Bienvenu of Stephens Inc. said that "while Tyson beat our estimates and narrowly beat consensus estimates, the quality of the beat was low."

Stephens forecast Tyson would record adjusted earnings of $1.33 per share compared with FactSet's consensus of $1.63 per share. Tyson missed estimates of $1.70 per share from a Zacks Equity Research consensus.

"Beef and pork [segments] drove the result, while chicken and prepared foods were softer. ... We expect the stock to be down today," Bienvenu said Thursday morning.

As part of Tyson's "financial fitness" restructuring program, the company reported it plans to eliminate roughly 500 positions across several areas and job levels. A data table shows that most of the changes -- $21 million and $22 million -- are happening in Tyson's chicken and prepared foods businesses, respectively.

"We're shipping product to China and have more orders on the books," he said, despite tariffs that put those products at a pricing disadvantage in the Chinese market.

"If tariffs are lifted or reduced, we would likely see an acceleration of already increased global demand for U.S. pork, beef and chicken."

Tyson is also monitoring the coronavirus as it pertains to the company's operations and employees.

"We're actively assessing what this outbreak may mean for us, for our global business, and preparing for the possibility of any impact," White said. "In China, we've been working with the government and have successfully restarted some of our operations. The financial impact is unknown at this time."

After the earnings call, Tyson held its annual shareholders meeting for fiscal 2020 at the company's technology building on Emma Street in downtown Springdale.

Under the board's recommendations in a proxy filing in December, a majority of shareholders voted in favor of the same slate of directors as last year, including the addition of Jonathan Mariner, founder and president of TaxDay LLC; the ratification of PricewaterhouseCoopers as Tyson's public accounting firm; and a nonbinding vote to approve the compensation of the company's executive officers.

Also under the board's recommendations, a majority of shareholders rejected a proposal to require Tyson to publish a yearly deforestation impact report; a proposal to expand Tyson's corporate lobbying disclosures; a proposal to conduct a human rights report; and a proposal that requires senior executives to retain at least 25% of company shares.

Just before the meeting, a group of about 20 protesters stood outside holding signs and chanting slogans. One wore a chicken suit, another carried a washboard.

"We have yet to see any signs that they are following through on their promise," Greenberg said.

In response to the protest, Tyson issued a statement defending its commitments to sustainability and its achievements thus far.

The company said it was "on track to reduce greenhouse gas emissions 30% by 2030 through our supply chain. We also have reduced water use by 1.3 billion gallons since 2015 and continue to make progress on our commitment." 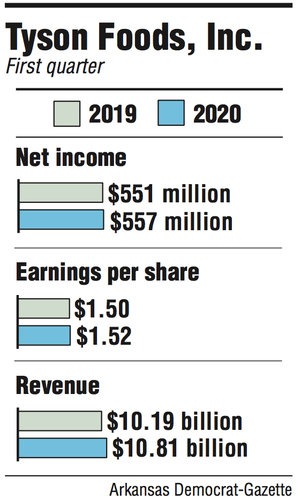