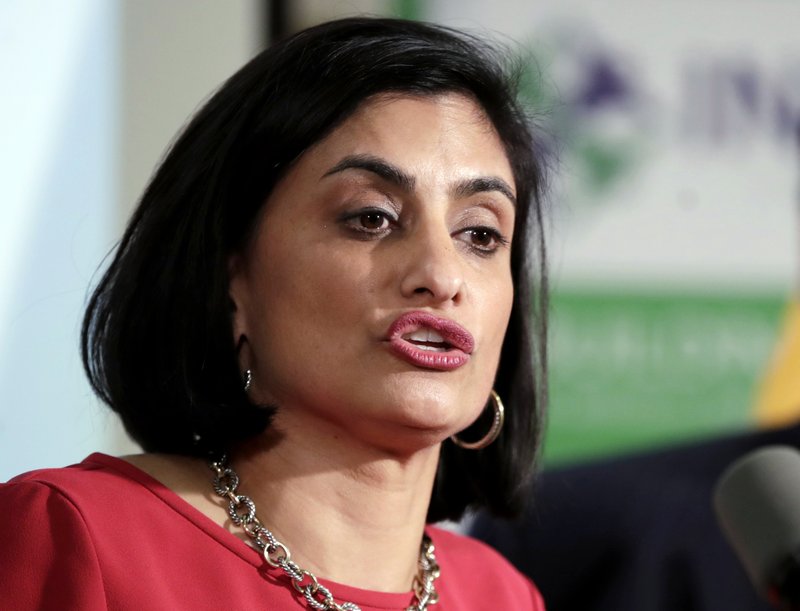 FILE - In this Nov. 29, 2017 file photo, Seema Verma, administrator of the Centers for Medicare and Medicaid Services, speaks during a news conference in Newark, N.J. Governors of both parties are warning that a little-noticed regulation proposed by the Trump administration could lead to big cuts in Medicaid, restricting their ability to pay for health care for low-income Americans. (AP Photo/Julio Cortez, File)

WASHINGTON -- Governors of both parties are warning that a little-noticed regulation proposed by the Trump administration could lead to big cuts in Medicaid, restricting their ability to pay for health care for low-income Americans.

The fiscal accountability rule proposed by the Centers for Medicare and Medicaid Services would tighten federal oversight and approval over complex financing strategies states have long used to help pay for their share of the $600 billion program. Also targeted are certain payments to hospitals that treat many low-income patients. Public comments closed last week.

"States may be unable to adequately fund their Medicaid programs, which could lead to unintended consequences that would negatively impact Medicaid beneficiaries across the country," wrote Govs. Kate Brown, D-Ore., and Charlie Baker, R-Mass., in official comments on behalf of the National Governors Association.

But Centers for Medicare and Medicaid Services administrator Seema Verma says the vast health care program needs closer scrutiny and has expressed concerns about "shady" financing schemes that abuse the system and drive up taxpayer costs.

In a statement Wednesday, Verma said her agency recognizes the "critical importance" of the state financing but said it has to lead to better value and improved care for Medicaid beneficiaries. Under the proposed rule, "we are increasing transparency, integrity and clarity," she said.

An agency spokesman said the rule is not intended to reduce Medicaid payments.

The proposal could lead to cuts of $37 billion to $49 billion a year in total Medicaid spending, or 6% to 8% of program funds, according to a study by Manatt Health consultants for the American Hospital Association. Payments to hospitals could be cut as much as 17%.

A Centers for Medicare and Medicaid Services spokesman said the agency doesn't believe those estimates are credible. In the rule, the agency says that the fiscal impact of its plan is "unknown." Critics say the agency did not do a full analysis.

Medicaid covers more than 70 million people, or about 1 in 5 Americans.

Trade associations for hospitals and nursing homes are asking the administration to withdraw its proposal entirely. So is the American Medical Association, saying "access to care for Medicaid beneficiaries would be at risk and health outcomes for such patients could worsen."

Overall the federal government pays about 60% of Medicaid costs, and states the rest.

Also in the cross-hairs of the proposed rule are Medicaid "supplemental" payments to hospitals that treat a large share of low-income patients. Those could be curtailed.

Governors and state Medicaid directors say they agree with the Trump administration's goal of greater accountability for Medicaid financing. But they're concerned the administration hasn't done its homework.

"Preempting states' authority and reducing states' flexibility within their Medicaid program will result in decreased access to care for many vulnerable Americans," wrote Govs. Brown and Baker.

Joe Thompson, chief executive of the Arkansas Center for Health Improvement, noted in a Jan. 31 letter to Verma that supplemental payments make up about half of the total amount paid by Medicaid to hospitals in the state.

It's hard to tell how those payments would be affected by the proposal, Craig Wilson, the center's director of health policy, said.

"Our biggest worry on this is that it becomes unclear for states and that they shy away from putting up funds that they would otherwise put up to draw down the nonfederal share, which would curtail the payments to the hospitals that would otherwise get it, and particularly those rural hospitals that depend on those funds to sometimes stay afloat," Wilson said. The center is part of the University of Arkansas for Medical Sciences.

"We think, along with other hospital associations and the American Hospital Association, that the best thing would be to withdraw the regulation and be more specific about what they're trying to do here," Ryall said.

Information for this article was contributed by Ricardo Alonso-Zaldivar of The Associated Press; and by Andy Davis of The Arkansas Democrat-Gazette.