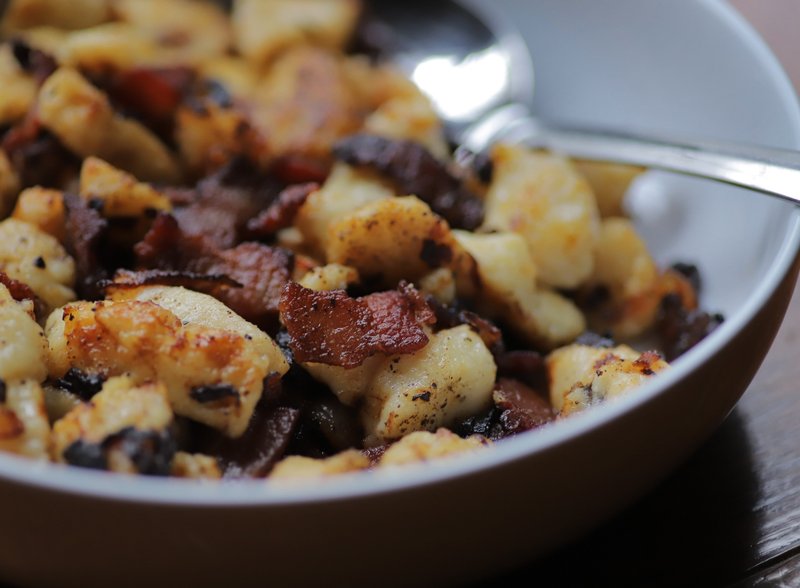 The world of dumplings is a vast, carb-rich, wonderland.

From Europe's spaetzle and gnocchi; to Asia's mantou, wontons and momo; to the Americas' brown bread, tamales and drop dumplings; to West Africa's fufu; and Australia's dumplings with Cocky's Joy (golden syrup dumplings) — some form of dumplings exist in virtually every corner of the world.

Some might argue dumplings are the world's universal comfort food.

A dumpling, by definition, is a small bit of dough cooked by steaming or boiling.

But for the most part, dumplings fall into two categories: filled and unfilled. This story features unfilled dumplings. Filled dumplings will be featured later.

Spaetzle — German for little sparrows — are tiny noodle-like dumplings made of eggs, flour and liquid. Versions of spaetzle can be found in Alsace, Switzerland, Austria, Hungary, Slovenia and northern Italy.

We usually don't advocate buying a one-job kitchen gadget, but in the case of spaetzle, we make an exception. Yes, you can make decent spaetzle without a spaetzle maker — a large-holed colander, a potato ricer and even just cutting and scraping the dough off the cutting board and into the simmering liquid will work — but for superior spaetzle, a spaetzle maker makes a world of difference. The one we use costs about $10. It looks like a cheese grater with straight large round holes. 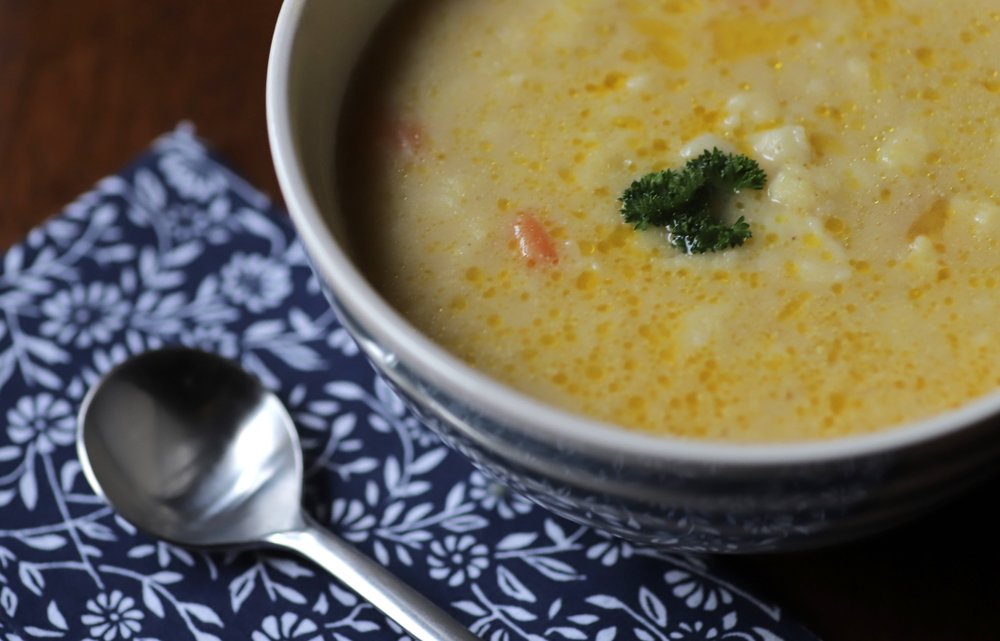 We love these tiny dumplings in chicken soup, but they're also quite delicious combined with cheese for a twist on mac 'n' cheese or simply tossed with butter.

Water or broth, for cooking

In a medium bowl, whisk together the flour, salt (I used about ¾ teaspoon Diamond Crystal kosher salt), black pepper and nutmeg.

In a separate bowl, whisk together the milk and eggs.

Slowly stir the milk-egg mixture into the flour mixture until no dry streaks remain. Quickly whisk until smooth. Cover and refrigerate for 15 to 30 minutes.

While the batter rests, bring 3 quarts of water or broth to a boil. If using water, add about a tablespoon of salt.

Spoon about ½ cup of the batter into the spaetzle maker. Depending on the type of maker you have, squeeze the handles to push the batter through the holes or rake the hopper back and forth across the grate into the boiling water. Cook, maintaining a simmer, until spaetzle float. Remove cooked spaetzle with a slotted spoon. Repeat with remaining batter.

Recipe adapted from The Best International Recipes from the editors of Cook's Illustrated.

Pierogi may be the most famous Polish dumplings, but they aren't the only kind. Kopytka, translated as "little hooves," are similar to gnocchi but easier to shape — no forks required. This recipe calls for serving them with crispy fried shallots and bacon, but they're quite good served with pot roast or buttered bread crumbs too.

3 to 4 tablespoons vegetable oil or butter, divided use

Place potatoes and about 1 teaspoon of salt in a medium saucepan and add enough water to cover by an inch. Bring to a boil; reduce heat and simmer until potatoes are tender when pierced with a long skewer. Drain and mash with a bit more salt until perfectly smooth. Tip mixture out onto a floured work surface to cool.

Once the potatoes are cool enough to handle, shape mixture into a mound. Make a well in the center and break the egg into the well. Add 1 ½ cups flour and, working from the center out, mix and knead mixture into a soft dough. If the dough is quite sticky, dust it with flour as you work. Shape dough into a ball. Divide ball into 3 portions. Roll each portion into a long, thin cylinder. Cover and set aside.

Meanwhile, bring a pot of water to a boil. Season with about teaspoon of salt. Cut the dough diagonally into small pieces. Cook them, in batches of 8 to 10 at a time, in the boiling water, being careful not to crowd the pan. Once they float, let them cook 3 to 4 minutes more, then remove with a slotted spoon and drain. Repeat until all of them have been cooked. (If you don't want to cook all of them the same day, arrange the cut pieces on a baking sheet lined with parchment paper and freeze until solid. Transfer the frozen dumplings to a freezer bag and store in the freezer for up to 3 months.)

Add the drained hooves to the skillet with the shallots and bacon, along with a pat of butter if needed, and fry for a couple of minutes before serving. 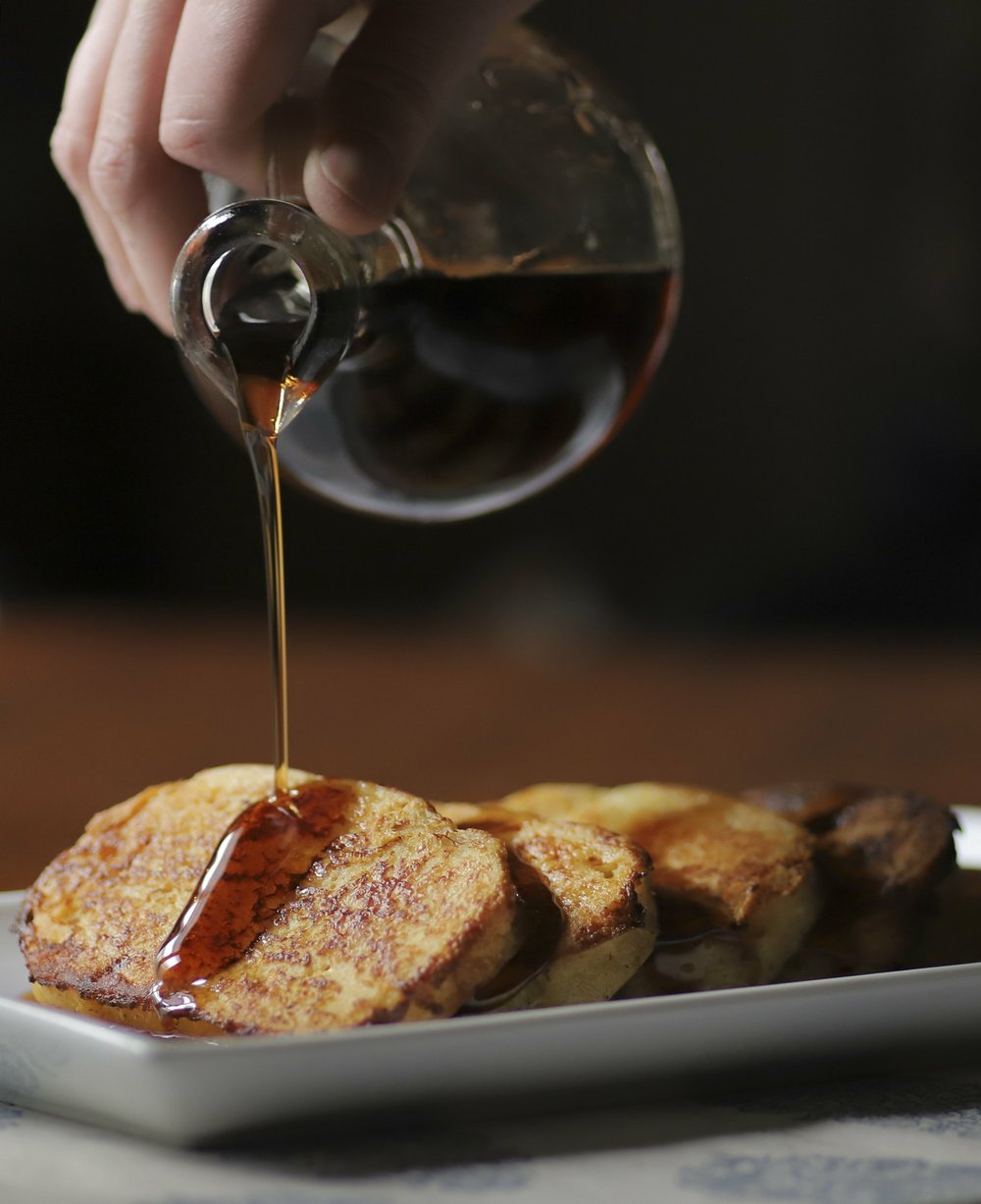 Bread dumplings are common throughout central Europe — Germany, Poland, Hungary, Czech Republic, Slovakia, Austria — and are a great way to re-purpose day-old bread. There are numerous variations on the bread dumpling including Germany and Austria's semmelknoedel and serviettekloss, Italy's canderli and Czech Republic's houskove knedlik.

This variation, based on the Czech houskove knedlik, is shaped into a log, and sliced after cooking. It is traditionally served with roasted meat, gravy and sauerkraut. Leftovers can be stretched further into French toast. For French toast, slice the chilled leftover dumpling into ½-inch thick slices, dip the slices in a mixture of beaten egg and milk — we like to add a tablespoon or so of sugar and a few dashes cinnamon — and pan-fry until golden brown on both sides.

6 cups ½-inch bread cubes from a 1 pound white loaf such as a baguette, ciabatta or country loaf, crust removed

Line a rimmed baking sheet with a tea towel or other smooth-weave kitchen towel. Generously dust towel with semolina. Set aside.

Dust a work surface, such as a cutting board, with semolina.

In a mixing bowl, whisk together the semolina, baking powder and salt. Stir in the egg and milk, mixing just until semolina is moistened. The mixture will be quite wet and sticky.

Using a wooden spoon, stir in 2 cups of the bread cubes and mix well. Add the remaining bread cubes, 2 cups at a time, to create a stiff, chunky dough. Turn dough out on to the dusted work surface and knead a few times. Shape dough into one thick 9-inch long log, or two thinner and slightly shorter logs. The logs should be sized so that they easily fit into pot for cooking. Transfer log(s) to the prepared baking sheet, cover, and let rest for 30 minutes.

Meanwhile, bring a wide pot of salted water to a boil over high heat.

Carefully slide or lower the dumpling(s) into the boiling water. Reduce heat to low, cover and simmer 15 minutes. Turn dumpling(s) over and cook 10 minutes more. Using 2 slotted spoons or a wide rigid spatula, carefully transfer dumpling(s) from pot to a serving platter. Let rest for 3 minutes, then cut into slices.

Serve with roasted meats and sauce. Dumpling(s) can be refrigerated for up to 3 days.

Note: Semolina is a coarse flour made from durum wheat. Look for it with the specialty flours. If you cannot find semolina, substitute a high-protein flour such as bread flour or whole-wheat flour. Do not use all-purpose or cake flour.

Recipe adapted from The Dumpling: A Seasonal Guide by Wai Hon Chu and Connie Lovatt 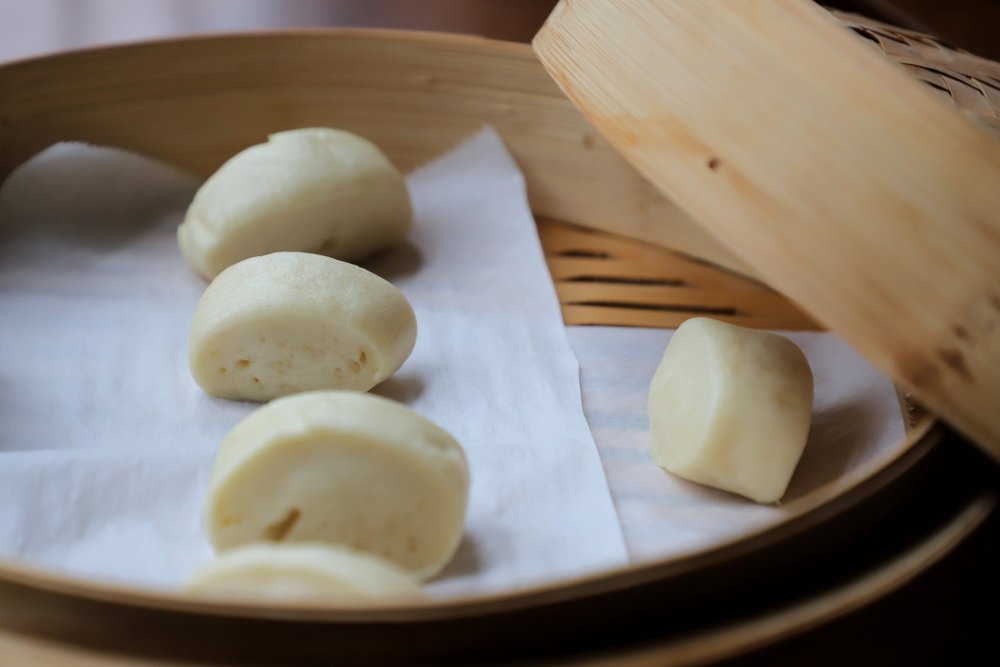 Mantou can be plain as shown here, or filled. (Arkansas Democrat-Gazette/John Sykes Jr.)

The dough for mantou (Chinese steamed buns) is the basis for a variety of dumplings, plain and filled. Fresh from the steamer, the plain version here taste like soft white dinner rolls, but without the golden-brown crust. Serve them as you would rolls, or split and stuff them with any tasty filling such as Chinese barbecue pork (char siu). And like rolls, they are best when fresh and warm.

Up to 4 tablespoons sugar

In a small saucepan, heat milk and oil over low heat until lukewarm (110 to 115 degrees). Pour into a bowl and sprinkle with yeast. Let proof for 8 to 10 minutes. Mixture should become foamy. If it does not foam, discard and begin again with fresh yeast.

In the bowl of a stand mixer or by hand, combine the flour, salt and sugar. With the mixer on low speed, slowly drizzle the yeast mixture into the flour mixture. Mix until the dough pulls away from the bowl. Then knead by hand, or using the dough hook, until smooth, 5 to 10 minutes.

Transfer the dough to a lightly oiled bowl, cover, and let rise until doubled in size, about 1 hour.

Turn onto a lightly floured surface and knead for just a few strokes. If the dough is too sticky, knead in flour a teaspoon or so at a time.

If making plain mantou with no filling: Divide the dough into two or three pieces and roll each portion into a long log about an inch in diameter. Cut the dough 1- to 2 inch-wide pieces. Let dough rest for 30 minutes. (The dough can be frozen at this point to cook later.)

When you're ready to steam the buns, line the basket of a bamboo steamer or steaming tray with parchment paper. Arrange the buns in a single layer spaced at least 2 to 3 inches apart on the parchment.

Fill a wok or wide pot with an inch or two of water and bring the water to a simmer over medium heat. After the water has begun to simmer, set the basket over the water, covered, and steam for about 15 minutes, 30 minutes if steaming from frozen. Repeat with remaining buns, adding water to the pot as needed.

Makes 18 to 36 dumplings, depending on size.