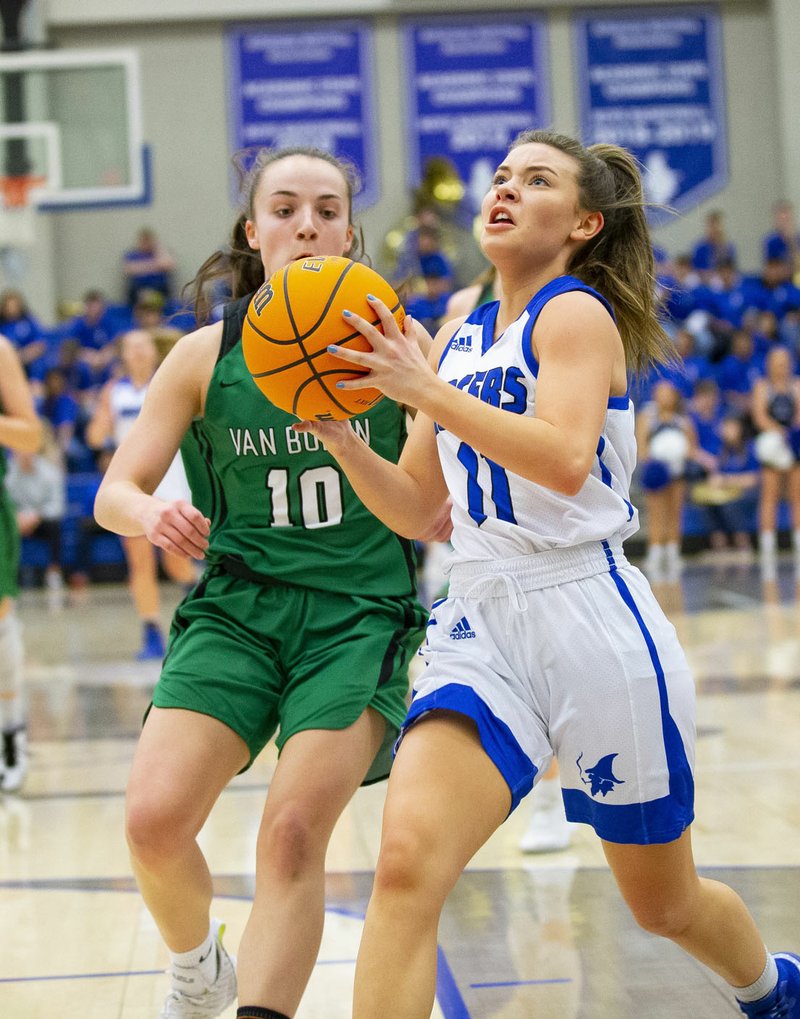 ROGERS -- Rogers High fell behind early again, but the slow start did not result in a second consecutive home loss.

Rogers eased ahead in the middle quarters and hung on to defeat Van Buren 44-38 Tuesday in 6A-West Conference play at King Arena. Six players scored between eight and six points for Rogers (14-8, 4-4), which dropped to fifth place in the league after losing to Rogers Heritage last Friday.

Van Buren tied the game with six minutes left. But Rogers pulled ahead again with the help of free throws from Camiran Brockhoff and Gracie Carr, who combined to make 8 of 10 attempts at the line in the final minutes.

"That was a big one for us," Rogers coach Preston Early said. "It might've saved our season. It put us back in the hunt again at 4-4. We looked like our old selves again."

Van Buren had closed to 36-33 when senior center Emmalee Grebe fouled out with 4 minutes, 56 seconds left in the game. Her absence was felt immediately when Taylor Treadwell rebounded a missed 3-pointer and scored to put Rogers ahead 38-33.

"London Hatcher missed a 3, but Taylor Treadwell followed it like a champion," Early said. "She got the offensive rebound and the stick-back. That was a big play, a momentum play."

The Lady Mounties got off to another slow start Tuesday and trailed 7-0 following a 3-pointer by Lexi Miller. That's the last thing Early wanted to see after the Lady Mounties fell behind 22-7 and lost 60-48 to Rogers Heritage last Friday at King Arena.

Rogers quickly recovered against Van Buren and took a 17-14 halftime lead with the help of 3-pointers by Brockhoff and Kate Miller in the second quarter. Rogers increased its lead and prompted a Van Buren timeout after Presley Risenhoover made a 3-pointer for a 29-24 advantage in the third quarter.

[Don't see the gallery above? Click here to see photos from the game]

Maryam Dauda and Bella Irlenborn each had double-doubles with Baylor assistant coach Sytia Messer in attendance as Bentonville opened the second half of 6A-West play with a rout of Har-Ber in Tiger Arena.

Bentonville began pulling away late in the second quarter, using a 12-3 run over the last 5 minutes to take a 28-18 halftime lead. The Lady Tigers closed out the third quarter with a 9-2 spurt for a 44-28 cushion, then went on a 16-2 run to start the fourth quarter and started the running clock when an Irlenborn bucket made it 60-30 with 3:03 remaining.

The Lady War Eagles jumped to a 22-9 halftime lead and cruised to the 6A-West Conference win.

The Lady Purple Bulldogs outscored the Wolverines 27-6 in the third quarter to take command and cruise to the win.

Fayetteville (16-4, 7-1 6A-West) led 25-13 at halftime, but blew out the opposition thanks to the big third quarter. Coriah Beck poured in 17 of her game-high 23 points in the third quarter. Sasha Goforth added 15 and Caroline Lyles 11.