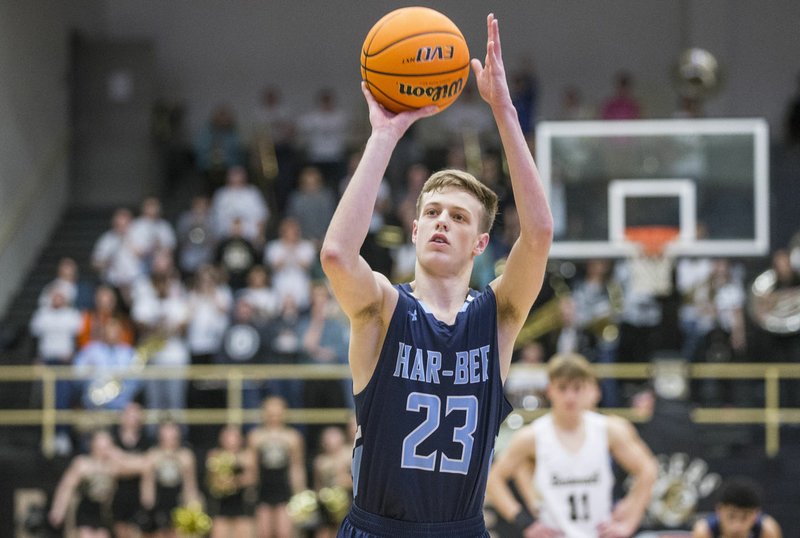 BENTONVILLE -- Lawson Jenkins called what he had to do "just another night in the gym by myself."

It was anything but that Tuesday night.

The Springdale Har-Ber senior hit five free throws in the final 3.1 seconds and gave the Wildcats the unlikely 60-59 victory over Bentonville High during 6A-West Conference action in Tiger Arena.

"I've seen something like that happen, but I've never been in that position myself," Jenkins said. "I've practiced free throws all the time, so it was just another free throw."

[Don't see the video above? Click here to see Lawson Jenkins' post-game interview as well as highlights from throughout the game.]

Har-Ber (16-3, 7-1) appeared headed for its second straight loss after Thane Spencer's two free throws gave Bentonville (13-7, 4-4) a 58-55 lead with 11.6 seconds remaining. Spencer then grabbed the rebound when Nick Buchanan missed a game-tying 3-point attempt, and Spencer just needed to hit a free throw to make it a two-possession gae and set up a likely Tigers victory.

"We're kinda used to crazy finishes," Har-Ber coach Tommy Deffebaugh said. "I heard the technical being called, but of course I was looking down the floor. I'm looking down the floor as we're trying to get the ball back, and all of a sudden I turn around and -- Bam! -- the referee said technical. Wow. Something like that just happens.

"When we get that kind of opportunity, and Lawson gets to hit free throws, then we're going to take it. The other players -- I know they're Lawson's teammates and friends -- but I'm telling them to just leave him alone and listen to me. I told them to not hit his hands and not bother him. Just let him stay in his zone and do his rhythm and let him get prepared."

The final turn of events overshadowed the 30-point performance of Bentonville's Brayden Freeman, whose 3-pointer gave the Tigers a 48-47 lead with 5:32 remaining. He later added a free throw to make it a 51-47 game with 3:41 on the clock, then both teams traded points until Buchanan hit two free throws and pulled Har-Ber within 56-55 with 12.9 seconds left.

JaJuan Boyd had 19 points -- 13 in the second quarter -- to lead Har-Ber, which retains its share of the 6A-West lead with the win.

[Don't see the gallery above? Click here to see photos from the game]

Rogers used an 8-0 to start the fourth quarter and pull away from Van Buren.

The game was tied 28-28 when Karsen Uecker opened the fourth quarter with a 3-pointer for the Mounties (17-2, 6-2). Elliot Paschal added a layup, followed by free throws from Will Liddell and Pascal.

Drew Miller scored 13 points to lead the Mounties, who outscored Van Buren 20-5 in the fourth quarter.

Jason Kimball's late shot was determined to be a two-pointer and left the War Eagles just short on Tuesday night.

Heritage's Micah Hill misfired on a 3-point attempt late and Kimball hit the follow at the buzzer. Officials conferred and ruled the basket good but only a two-pointer -- giving Springdale the win.

This contest was close the entire way as Springdale (9-11, 2-6 6A-West) led 31-29 after three quarters. The Bulldogs held a 41-38 lead late in the fourth quarter when Kimball swished a deep shot. He was ruled to have a toe on the 3-point line.