WATCH YOUR LANGUAGE! Body language is not so easy to read 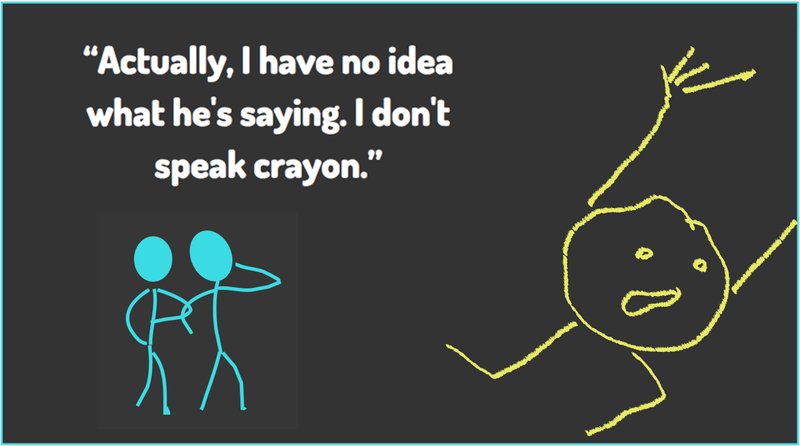 I decided to learn a little about body language.

A study done at the University of California-Los Angeles determined that only 7% of how we communicate is the words we use. The tone of our voice accounts for 38%, and body language, or nonverbal communication, makes up 55%.

I read more on this 1960s research by professor Albert Mehrabian. He used two groups of women in tests of how much tone or facial expression suggested whether the speaker liked the listener. In total, 47 women were tested in two samples.

That's a minuscule test group. And it's all women. Does this suggest that men communicate the same way as women? Also, only nine words were tested.

Mehrabian concluded that words, tone and body language all "account for how we convey our liking, or disliking, of another person." This narrow reading has been extended to explain all forms of human communication.

I remember an obvious example of body language that a friend told me about. She said she was standing next to a woman sitting at a computer when the woman put her fingers on the keyboard and her eyeballs started to dart back from the keyboard to my friend. That is a huge hint that the sitting person is ready for the conversation to end. Well, that sounds right. (I vowed never to be that rude to anyone.)

I think people display more obvious body language when they're upset or nervous, and most of us are good at interpreting those. When friends show these signs, I'm likely to ask them to tell me what's wrong using words.

Some of the body language I read about sounded pretty obvious. In one example, a woman was waiting for approval on a project from her boss. Later, she remembered that when she was pitching the idea, the boss didn't make eye contact with her and kept looking out the window. Subtle, no?

I doubt the project will be approved.

Some examples of negative body language are obvious:

Folding your arms in front of you means you're not receptive. (Or maybe you're cold.)

Maintaining a tense facial expression. (Work on your poker face!)

Turning your body away from a listener. (Um. Painfully blunt.)

You should stand up straight but be relaxed. (Or does that suggest you have a stiff back or neck from a bad night of sleep?)

Shake hands firmly. (I get this one. A weak handshake lingers in memory.)

Make eye contact. But don't stare. (By now, I think the message is, "all things in moderation.")

Don't touch your face. (I would get called out on this, again and again.)

He has some interesting comments. He says that when people fold their arms in front of them, they're self-soothing. That's more of a sign of timidity, which I guess could make a bad impression. What you do with your feet matters. If your feet are turned away from the person, you'd like the conversation to end.

I think what I dislike about these body language analyses is that everyone is different, and they do different things. Navarro said that when two people greet each other on the street, one might be likely to back up a little. This indicates each has a different view of comfortable distance. Here's a video in which Navarro dismisses common myths about body language.

I am extremely short, and my significant other is 6 feet, 2 inches tall. When we're standing at a restaurant waiting for a table and we start to talk, I have to tilt my head back to make eye contact with him. It hurts my neck to do so for too long. So, I often step back a bit. It doesn't mean I'm uncomfortable standing close to him. It means I don't want a sore neck.

I'm cynical about the Mehrabian study, to be sure. Businesses use its percentages to teach people to be authoritative. Dating sites use it to advise people how to appeal to potential partners. But I think intuitive people know how to recognize things other people do. And they might be inferring correct notions. Or maybe their conclusions are wrong. I think that making a blanket statement about others — and using their words as only 7% of the message — is just not safe.

An early expert on body language was Desmond Morris. I hope to read his works to get more insight.

Recently, I've been having computer problems, which is similar to agony for a freelance editor. It also meant I needed to tell some of my supervisors, on short notice, that I couldn't work some days. I apologized to one person for leaving her in the lurch. Naturally, I wondered what the heck a "lurch" was.

It originated from a 16th-century French dice game called "lourche." To "lurch" was to fall behind your opponents (read more at arkansasonline.com/203lurch).

The phrase also was used in cribbage, a game about which I know nothing. Today, the phrase means more generally to leave someone in a bad situation.

That's what is fun about idioms. You might not know what all the individual pieces of a phrase mean, but it works when it's all together. Kind of like my computer.