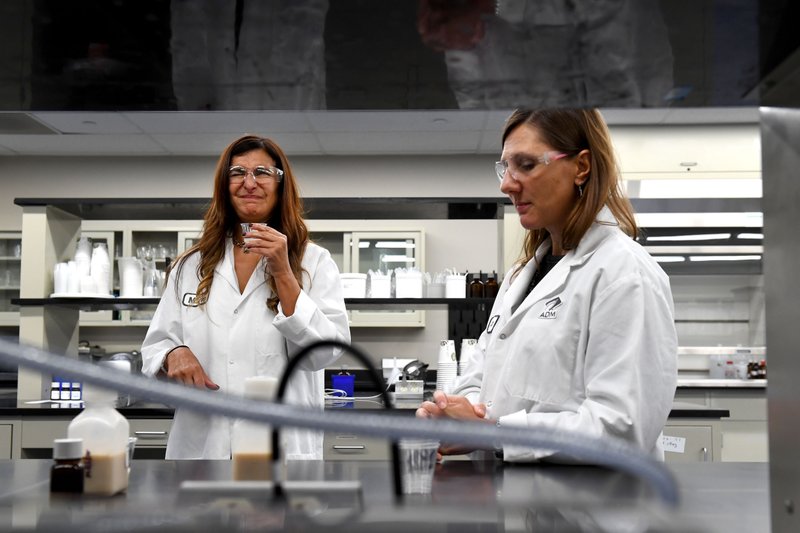 Marie Wright, vice president and chief global flavorist at Archer Daniels Midland, doesn't like the taste of the first of four samples of a protein shake that Joy Merritt is working on. (The Washington Post/Katherine Frey)

CRANBURY, N.J. — Marie Wright dips four long strips of paper, the kind you'd sniff for a perfume sample from Sephora, into bottles of clear liquid marked Methyl Cinnamate, Ethyl Butyrate, y-decalactone and Furaneol. She holds the four strips together and wafts them, fanlike, under her nose.

Suddenly, the lab smells of strawberries.

Wright is the vice president and chief global flavorist for Archer Daniels Midland, one of the world's largest food processors and suppliers. She's a former perfume industry chemist who has created more than 1,000 individual flavors for large food and beverage companies, and she's now facing one of the biggest challenges of her career.

Consumers are seduced and beguiled by flavorists without even being aware of it. Flavorists are the people who tinker with nacho cheese dust, Hot Pockets and pumpkin spice lattes. They are the tastemakers, driving consumer trends and making food crave-able.

Wright and the planet's 200 or so other flavorists are bringing their alchemy to plant-based meat. It's the biggest craze the food industry has seen in a long time, driven by concerns about climate change, animal welfare and human health. It is still dwarfed by the $49 billion beef industry. However, the Swiss investment firm UBS predicts growth of plant-based protein and meat alternatives will increase from $4.6 billion in 2018 to $85 billion by 2030.

Despite its swift ascent, plant-based meat is the antithesis of recent trends such as local and farm-to-table dining. It represents an embrace of highly processed foods made palatable in a laboratory by technicians such as Wright.

"These are great proteins from a nutritional perspective, but plant-based presents some challenges with tastes that can be unpleasant," Wright says.

First, there is the masking of the vegetal "green" notes in pea protein and the "beany" notes in soy, often by adding other ingredients and chemicals.

"There isn't one magic bullet, not one molecule or extract. It tends to be common pantry items like salt, spices, molasses, honey," Wright says. Vanilla extract is often used for masking because it is known for how it binds to a protein, rendering its own distinctive taste undetectable.

"It sacrifices itself," she says. 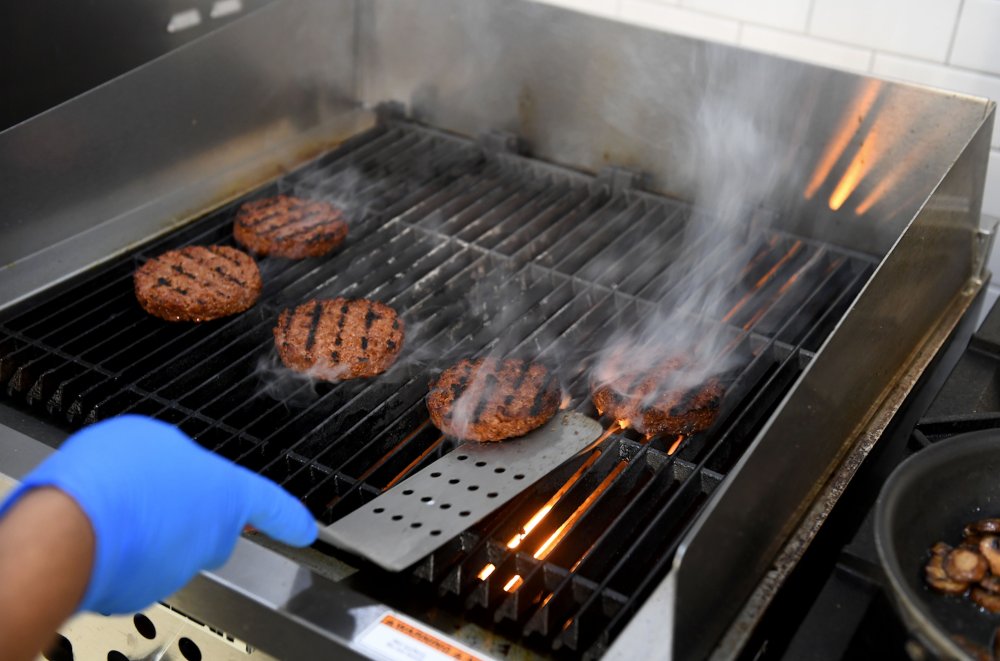 A plant-based burger enhanced by flavors created at Archer Daniels Midland is tested and tweaked before the client will come to a tasting. (The Washington Post/Katherine Frey)

She describes vegetal notes that are more about aromatics. The goal is not to remove these aromas but to prevent them from being perceived.

"Smell and taste are closely linked in the appreciation of flavor but are independently triggered," she says. "Taste is composed of the taste sensations perceived in the mouth and odor compounds perceived by the receptors in the nose linked to the olfactory lobe."

Then comes the insertion of the mineral, musky, charry, umami flavors that we associate with meat.

Wright huddles with fellow flavorist Ken Kraut, who works only on the savory side. They swirl little plastic cups of clear liquid, sniffing and tasting. Too yeasty, they say. They want a little less soy and a bit more umami — that elusive, savory monosodium glutamate flavor. Mushrooms give that umami flavor, as does Japanese green tea.

Meat's mineralized note can be mimicked by concentrated extracts of broccoli and spinach.

"They want to do it in anywhere from six weeks to three months — there's an urgency, a panic," Wright says. "Usually, a product is a year to 18 months to complete."

Wright says an ordinary product — a snack bar or a protein drink — might cost a client from $10,000 to $200,000 to have ADM formulate a recipe, which the company can then produce in its own processing facilities. Plant-based meat is different.

"This whole area is expensive because it's fairly high-tech, with a lot of dollars involved in research," she says. "Something like this, you're talking $100,000 to $1 million."

There's a lot of heavy lifting that goes into making vegan sea urchins out of soy and vegetable oils or sausage links out of lupin beans, a yellow and occasionally bitter legume. The world is agog at plant-based meats that taste uncannily like the real thing, but nutritionists warn that if companies increasingly rely on chemists to insert desirable flavors into food, consumers might temper their enthusiasm for this new raft of better-living-through-chemistry processed foods.

With their pea protein isolates, their gum arabic and yeast extracts, these new foods are the opposite of whole foods, the obverse of transparent sourcing. Some nutritionists and food industry leaders are wondering whether the food system is being led astray by foods that have flavor and appeal inserted industrially.

"It doesn't resemble the foods from which it came; it has a vast numbers of ingredients. It fully meets the definition of ultra-processed food," says author Marion Nestle, a nutrition professor at New York University, about these new plant-based meats. "Are flavorists complicit? They always have been. These are industrially produced food to which flavors and textures and colors are added so it's attractive. What they do is cosmetics."

Back at the lab, Wright and team nudge the burger formula, trying to achieve the aroma and flavors resulting from the Maillard reaction, a chemical process between amino acids and sugars that gives caramelized meat its distinctive seared flavor.

They dry liquids in a spray dryer, tiny droplets sent through a hot chamber in a stainless-steel box, the water driven off to produce powders. They consider the protein, the flavorings and the binders, looking for a mineral, bloody note and seeking appealing top notes that mimic seared sirloin. They go beyond sweetness, sourness, saltiness, bitterness and umami, reaching for a lesser-known "sixth taste" sensation that the Japanese call kokumi, which translates as something like "heartiness" or "mouthfulness."

Then they take their thoughts into the kitchen.

John Stephanian, ADM's culinary director, went to culinary school but considers himself a culinologist, a job where the culinary arts and the science of food meet. As the flavorists arrive, he's plating the plant-based burgers, deep ruddy patties with charry grill marks, tucked onto glossy brioche buns with delicate parmesan crisps. Wright tastes, appraising. How is the chew? Is it meaty enough? 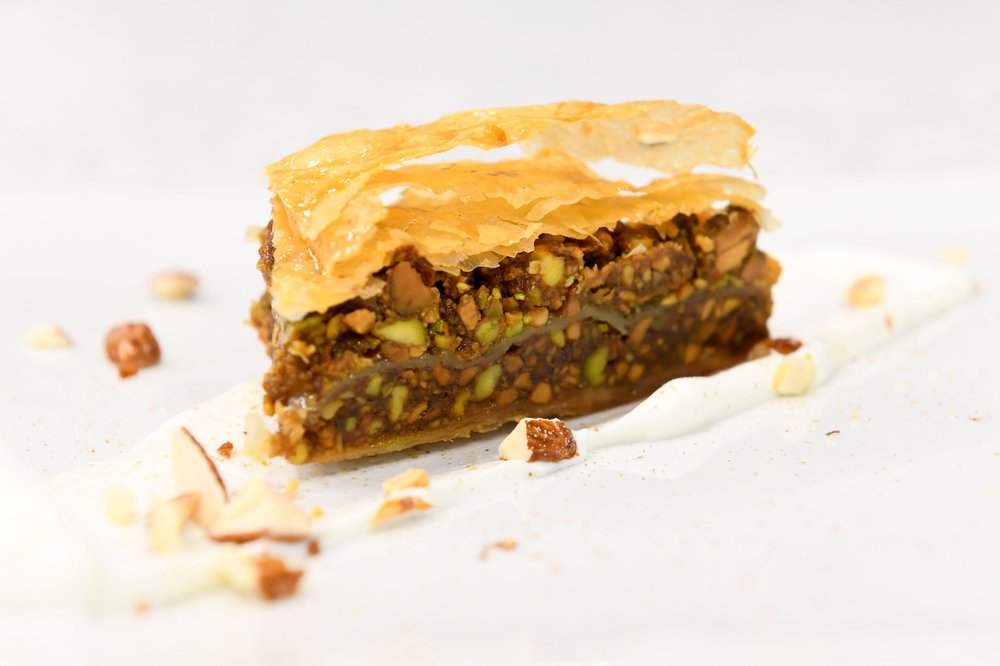 Wright grew up east of London and studied chemistry at King's College London. She worked in Europe for years, moved to New Jersey and commuted back and forth to South America to set up flavor labs.

Salaries for flavorists vary widely, she says, from $50,000 to $500,000. Flavorist is a mentoring profession, with trainees spending years as underlings in places such as ADM's Academy of Future Flavorists program. It takes seven to 10 years to achieve flavorist status, and 20 to be a senior flavorist, Wright says.

"Learning the materials takes three to four years. Like being a pianist, you have to practice. A trainee may do 20 to 30 versions of a flavor," she says. 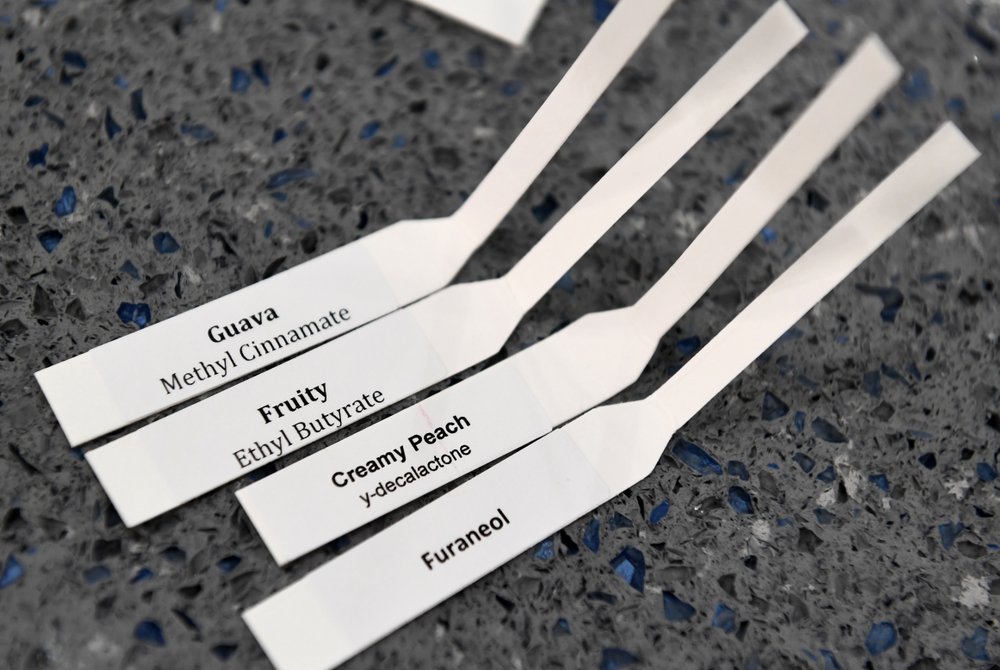 These four flavoring ingredients combined create the flavor of a strawberry at Archer Daniels Midland. (The Washington Post/Katherine Frey)

Flavorists work with beakers and magnetic stir bars. They work with gas chromatography mass spectrometry instruments that separate chemical mixtures and identify the components at a molecular level. They paint their pictures with essential oils, resinoids, concretes and absolutes, the building blocks of fragrance and flavor. But mostly, they use their noses and skills of prognostication.

Designing an average of 300 new products a year, flavorists have tens of millions of dollars riding on their senses and gut instincts about the next big thing in the food industry.

"There are so many influences from all over the world. If you're going to hang your hat on a flavor for next year, you may be wrong," Wright says.

It's about reverse engineering, listening to clients' visions while tracking trends and predicting consumer fetishes and preoccupations.

"Consumers are driving trends. Trends only used to come from high-end restaurants. Now, a lot of trends are coming from street foods," she says. "The consumer has changed. They're saying, 'I'm not going to eat that, and I have a say.'"

She points to smaller food companies such as Beyond Meat and Impossible Foods, which have pushed food giants such as Cargill, Tyson Foods, Kellogg and Smithfield Foods into a headlong race to produce signature plant-based meats.

Before the day is over, Wright checks in with a flavorist working on an energy bar flavored with salted caramel, then with a team in the mint lab working on a gum that both cools and tingles. She tastes a nitro coffee, deciding whether it should be flavored with Madagascar or Ugandan vanilla — the former classic and beany, the latter sweeter with a hint of milk chocolate.

And about that burger. Nondisclosure agreements prevent her from naming the company behind this plant-based burger, but the meeting is a success, the company's team staying for two days to hash out the details.

"They liked aspects of it, and they also wanted some changes in the fat delivery. They wanted a bit more of that bloody, minerally note and more of that seared taste, as well as that melty quality you get with animal fat," Wright says.

"A few years ago, they didn't have to taste so fantastic, but now we can really replicate a meat product without meat," she says.

Clients often provide nutritional and price guidelines, with the ADM team working within constraints such as calorie counts or projected retail cost. Once the formulation has been approved, the client gets the recipe, frequently having it produced and packaged by a co-manufacturing facility. Wright and her group don't produce the finished, packaged product. They invent the formula.

With food technology and the culinary zeitgeist moving so swiftly, predicting what will resonate with consumers is tricky — even with Wright's expanding toolbox of ingredients and food technologies.

"It's a huge area of investment," Wright says. "If it doesn't taste delicious, people are not going to buy it."