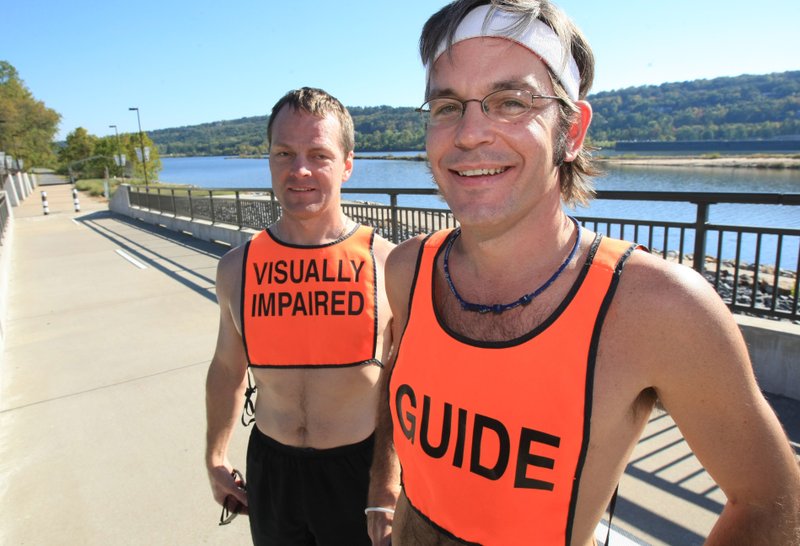 At the bottom of River Mountain Road in Little Rock, across the railroad tracks, is a parking lot.

Show up here on a nice day and this place is packed with runners, walkers, cyclists and others who will cross Two Rivers Bridge to follow the Arkansas River Trail into Two Rivers Park or head east on the trail toward the Big Dam Bridge. The nearby boat ramp parking lot is also likely to be filled with the vehicles of fishermen and boaters.

Jacob's Plaza, with its restrooms, bicycle repair stand and water fountains, is the newest addition to this area.

On the west side of the building, which has a red metal roof and is made of stone, cinder block and wood, is a panel that contains a quotation. It's a little long, but here it is in its entirety:

"Running is an individual sport.

"After hundreds of races and thousands of miles, I began to question my own invincibility and the imbalance of what I had taken from running to what I had given back to it.

"Like any physical activity, running can be taken away from you at any moment. Encouraging, inspiring, and introducing others to the blessings and benefits of running became my passion.

"I have found that running is the gift you can give away and still keep."

It's not attributed on the sign, but the quote is by Jacob Wells. The plaza and its amenities were made possible in part by a $30,000 donation Jan. 19 to Little Rock Parks and Recreation from the Jacob Wells 3 Bridges Marathon and Memorial Fund.

Wells was a Little Rock runner who in 11 years competed in 154 marathons and hundreds of shorter races. He created the 3 Bridges Marathon in 2013 to put a spotlight on the river trail and raise money to support it.

On Nov. 1, 2014, Wells, who had an undetected heart condition, collapsed at about mile 20 of the Midsouth Marathon in Wynne. He was taken to a Memphis hospital and died a week later. He was 45.

Bill Torrey is a runner, race director and owner of the Little Rock store Bill Torrey's Rock City Running. He was a longtime friend of Wells.

Wells could be critical, but Torrey says that "Jacob realized one day that instead of criticizing, it was better to give back and encourage, just like the quote says."

Dave Wilkinson is a blind runner who spent countless miles being guided by his friend Wells on training runs and in races — including the 2007 Boston Marathon.

"We got to know each other incredibly well," says Wilkinson, who now lives in Louisville, Ky. He delivered the eulogy at Wells' memorial service. "For many years, our relationship revolved around running, we really became extremely good friends ... He is the only person I know who could make statistics interesting."

Wilkinson, who has run the 3 Bridges Marathon every year but one — when he was nursing two broken vertebrae — says that though Wells was "an extrovert to the max," he was also thoughtful and "could be an incredibly deep and insightful person ... He was a character, but he was a character with an awful lot of substance."

When Torrey opened Rock City Running, Wells was not only a regular customer, he liked hanging out in the store's lounge area.

"We used to talk about putting on races," Torrey says. "I've been race-directing since 1985, and he was picking my brain on how to get the 3 Bridges Marathon started."

An accountant, Wells kept ledgers with plans for the race.

"I always found that funny because I'm just the opposite," Torrey says, "not that that's a good thing."

Wilkinson remembers Wells coming up with the idea for the marathon while housebound during a heavy snowfall.

"He planned that race in the Christmas Blizzard of 2012," he says. "And then he had friends out there, including me, on New Year's Day running parts of the course to see how it all fit together."

Wells' motivation for 3 Bridges was "to showcase our river trail and our bridges. He really did love to run at the Two Rivers Bridge and Two Rivers Park area. It was his favorite spot." The accounting firm where he worked was not far from the bridge. 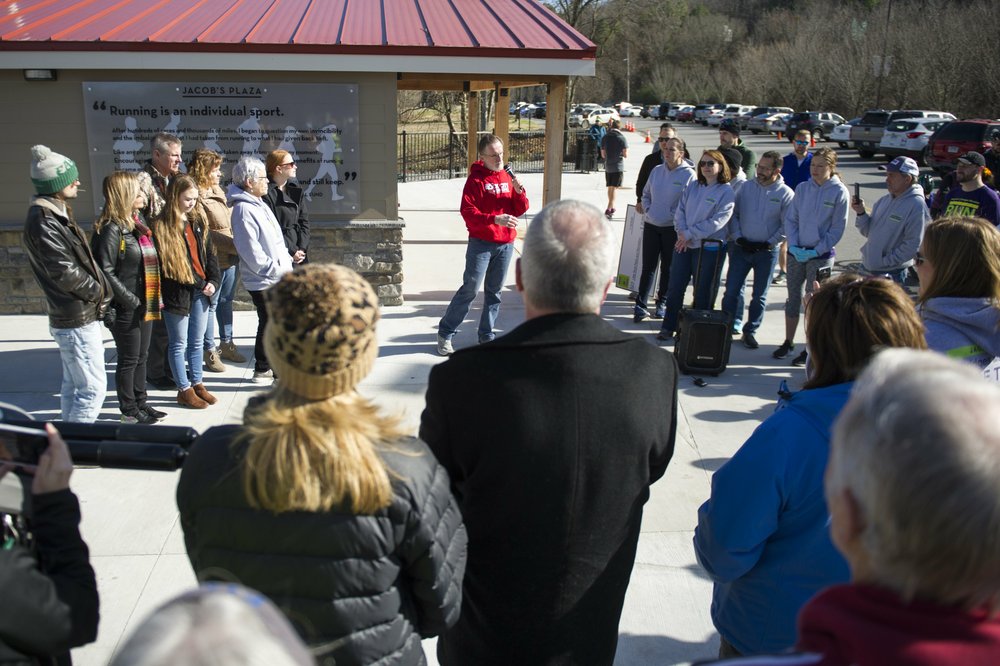 The race still happens each December, with Torrey as director. And now, with money raised from the run, there's a new space for runners and others to enjoy year 'round.

"The goal all along was for 3 Bridges Marathon to contribute to the Two Rivers area," Torrey says. "It's crazy how many people use it. It's a really neat area."

Speaking about Wells and the new plaza, Wilkinson says: "I'm really excited that there is something there so that he will always be a part of Little Rock running."