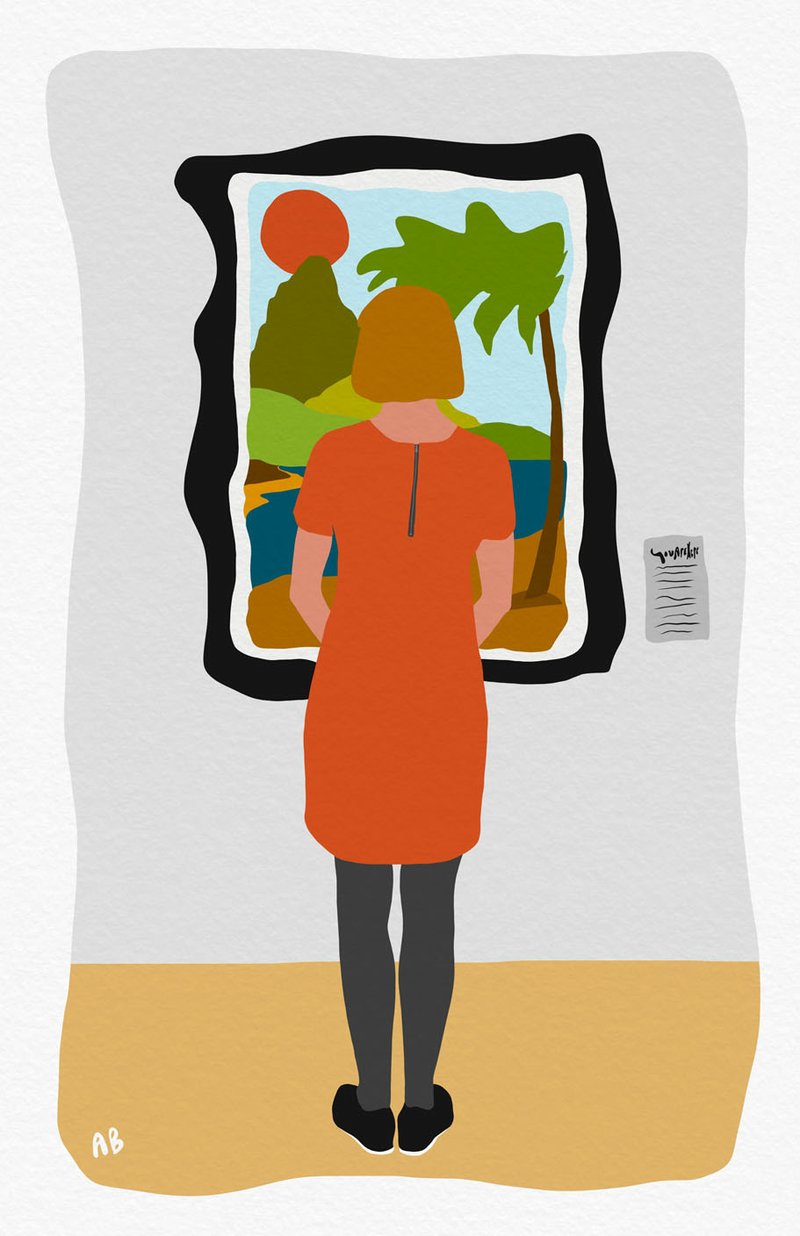 "I usually want to give the viewer boldness and color and depth, but only enough information to convey a meaning and elicit a reaction -- followed by a moment of instantaneous relatable introspection and maybe a little laugh," says Aaron Bleidt of his artwork. (Courtesy Image/Aaron Bleidt)

The lines are simple, the colors vivid, and the topics seem to invite viewers to project themselves into Aaron Bleidt's art. But there's a lot more going on behind the "archival pigment inks on the very best fine-art papers."

"I usually want to give the viewer boldness and color and depth, but only enough information to convey a meaning and elicit a reaction -- followed by a moment of instantaneous relatable introspection and maybe a little laugh," says Bleidt, who is perhaps best known to Northwest Arkansans as the 2000-2010 editor and publisher of CitiScapes Magazine. "I am at my core an eternal optimist and a believer in the goodness of humanity. If I can achieve one thing with my work, it is that it brings a smile or a laugh to those who view it -- and that it serves as a reminder to folks not to take themselves quite so seriously.

‘Artful Outsider: You Are Here

WHERE — Arsaga’s at the Depot in Fayetteville

"That's what creating this work has done for me," Bleidt admits. "Key takeaway: We're all on this rock hurtling through space together, and life's just too short to not have fun."

In his business life, Bleidt is "all about goals and strategy and linear paths" as the founder of Vantage Point Communications, which counts among its clients some of the biggest arts producers and presenters in Northwest Arkansas. But behind the scenes, he and husband John have been collecting art for many years.

"I've always been a 'collector' of sorts," he says. "Even as a kid I collected things from coins to rocks and other natural curiosities. But it wasn't until around 2000 or so that I started collecting local/regional art. In the 20 years since, we've become quite the 'rabid' collectors indeed, expanding our scope to include national and international artists as well."

Although he remembers creating art himself as a youngster, Bleidt didn't decide to try getting behind the brush until Christmas Day 2018. The rest of the story is obsession -- his word -- more than 150 works completed. "As with most things, I went full tilt, declaring that we'd turn our guest bedroom into a dedicated art studio," he says. But finding the medium that suited his goals took awhile. He tried pen and ink, marker, oil pastels and gouache watercolor, "but I quickly became frustrated and discouraged working through all the choices and possibilities, especially with regard to composition and how indecisive I was being in context of the different media, and thus with how much I was tearing through and wasting materials. It didn't seem sustainable."

Then he had what he calls an "a-ha moment."

"I could work through the compositional development on my iPad Pro tablet using my Apple Pencil, and then, with idea/concept honed, commit it to paper or canvas with at least a semblance of clarity of direction" -- or, as he soon came to understand, his primary medium "could and would be freehand digital drawing and printmaking."

"I tend to be a 'purist' with my digital work, typically shying away from using special filters or other advanced digital tools and preferring to keep my freehand drawings as close to actual pen or brush on paper as possible," he says. "Every pixel and 'stroke of the stylus' is mine."

The resulting prints became so popular on Instagram that Bleidt says he was able to "tear down self-created barriers and has instilled a new and exciting confidence that has allowed me to more freely express this wacky imagination of mine." He's even showing his work for the first time this month at Arsaga's at the Depot in Fayetteville, a prospect he finds "simultaneously exhilarating and terrifying."

"This is a labor of fun and of love -- an organic unfolding of new discovery each and every day," he says. "It's an experiment, I guess, in letting go and letting the universe guide me."