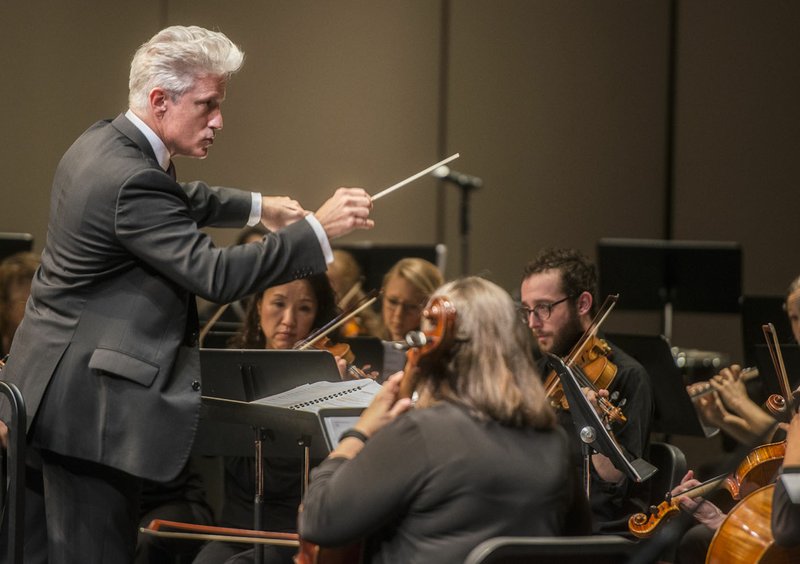 APO will finish its season May 16 at the Record with Steven Byess (pictured) conducting Michael Daugherty's "Dead Elvis." "This modern work by an American composer is exactly what you will expect in the future from the APO," says Executive Director Jason Miller. "Quirky, creative, and music with a story to tell." (NWA Democrat-Gazette File Photo/Anthony Reyes)

Jason Miller freely admits he wants to "trick" his audiences into coming to an Arkansas Philharmonic Orchestra performance. But it's for all the right reasons, Miller, the APO's executive director, promises.

"We want diverse audiences to experience the music in a new, different way," he explained during last fall's non-season announcement. "We believe being involved in the concert and having visuals complimenting the music will provide for a better experience and have patrons wanting more.

"We hear over and over [from potential audience members] that classical music isn't for them or they don't understand or don't want to dress up or it is music for the elite. The APO is on a mission to change that."

In the case of two back-to-back concerts Feb. 5, Miller has brought together theater, music and a world-class visuals arts setting for "Symphonie Fantastique: Obsession, Murder, and Unrequited Love."

"I have been intrigued by the storyline of Berlioz's 'Symphonie Fantastique,' so I wanted to create a theatrical experience for the audience," says Miller. "Many people have heard the symphony many times but don't know about the story behind it. We wanted to tell that story, so I reached out to the University of Arkansas Department of Theater."

"I am the head of the M.F.A. program in playwriting at the University of Arkansas, and the focus of this semester's playwriting graduate workshop is on adaptation," John Walch picks up the story. "And this is very much an adaptation, and seemed like a fantastique (so to speak) opportunity to collaborate with my students on a project. The text is co-written by M.F.A. candidates Lauren Ferebee and Brendan Beseth and me.

"The basic story," according to Walch, "is that composer Hector Berlioz wrote this symphony to get a girl, a popular actress in Paris during the 1830s named Harriet Smithson. But the way he pursued her was uncommonly bizarre. For instance, he did not talk to her; rather he put all his pent-up passion into what is now considered his romantic masterpiece. It premiered in 1830 to mixed results, but Harriet did not even hear it, so it failed on the terms Berlioz most wanted it to succeed.

"His behavior got even more antic and absurd as he reworked parts of it," Walch goes on. "He did things like take an apartment near hers so he could watch her coming and going. While some of this might be Parisian urban legend, by all accounts his pursuit of her was decidedly odd. There's also lots of celebrated stories about obsessive artists (usually male) and their muses (usually female) that have some creepy and disturbing implications. We wanted to play with this trope, poke at it, and have some fun with it.

"My second year playwright, Lauren Ferebee, uncovered the historical detail that Berlioz's mom disowned him," Walch adds. "This gave her the idea of looking at all this through Berlioz's long-suffering, disappointed and much-embarrassed mother. ... But did Hector win the girl? You will have to come find out."

"We were also inspired by the imagery in the final movement: 'Dream of a Witches Sabbath,'" Ferebee puts in. "We thought a lot about the way independent women in the 19th century were considered witches and how that might play into the strange visions Berlioz had of Harriet Smithson. That definitely was instrumental in creating some of the piece's more absurd moments."

"This has felt very much like a New Play Festival feel, which is thrilling," says Steven Marzolf, the UA professor who directed the piece. "Once we received the script and had rewrites, we as the actors and director have been exploring the script much like we would a new play. Listening to the symphony during rehearsals has been key, too. The music is so dramatic and romantic and passionate that it's actually informing the choices we are making as far as character development and staging."

All in all, says Miller, he and APO music director Steven Byess "are thrilled with this partnership, and we know it will highlight the music in a fun and creative way."

"Bringing multiple art forms together makes for a better experience for the patron," he adds, which is what he's been preaching throughout the APO's 10th "experimental" season.