On social media, debate rages on bushfires' cause 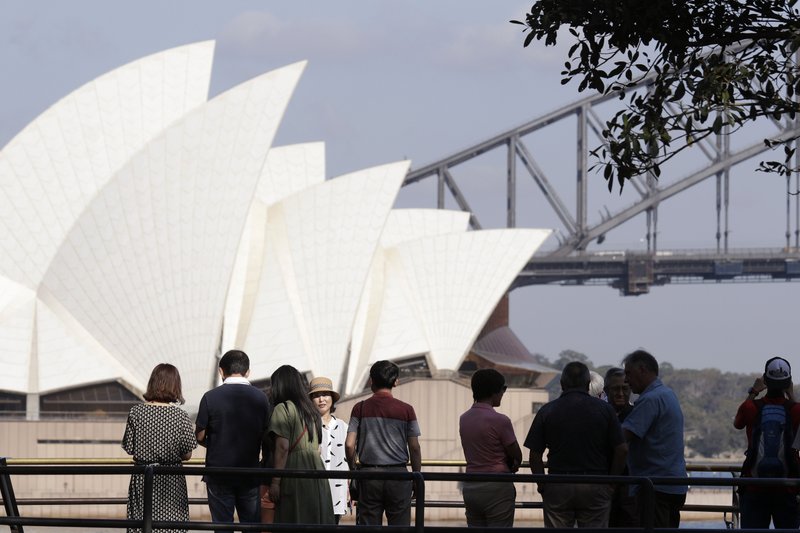 In this Jan. 22, 2020, photo, tourists gather to have their photos taken with the Opera House and Harbour Bridge as a backdrop in Sydney, Australia. Tourism Australia, a government agency tasked with promoting the country overseas, has taken steps to counter mainstream media messages that Australia is a nation on fire, pointing out that many tourist attractions have not been affected by the crisis. (AP Photo/Rick Rycroft)

CANBERRA, Australia -- Australia is in the midst of an increasingly bitter face-off between those who fault climate change for devastating wildfires in Australia's southeast and those who blame arson.

Humans burning fossil fuels and humans with criminal intent both factor into this unprecedented crisis. But just how to accurately apportion the blame has become a big political issue, especially among those who argue against deeper cuts to carbon emissions that scientists say trap heat in the atmosphere.

Firefighters blame lightning strikes for most of the major blazes in New South Wales and Victoria states, and many scientists say climate change is the main reason for the strength of Australia's wildfires.

However, many posters on social media are blaming arsonists.

[Video not showing up above? Click here to view » https://www.youtube.com/watch?v=QQjFQyTe-YA]

"More than 180 alleged arsonists have been arrested since the start of the bushfire season," Donald Trump Jr., the U.S. president's son, has tweeted.

Although it's been discredited by AAP FactCheck, the fact-checking division of news agency Australian Associated Press, the statistic has been repeated thousands of times online.

AAP FactCheck, a partner in Facebook's Third Party Fact Checking program, looking at misinformation on Facebook and Instagram, links the statistic to a statement by police in New South Wales -- the worst fire-affected state -- that said "legal action" had been taken against 183 people since November for "bushfire-related offenses."

These included only 24 people charged over "deliberately-lit bushfires." Legal action -- which includes cautions -- had also been taken against another 100 people for conduct that could be described as being careless during a fire ban. The statement did not detail the offenses alleged against the remaining 59 suspects.

Janet Stanley, a director of Australia's National Center for Research in Bushfire and Arson, blames climate change for fueling the fires.

"In the past, there's been little interest generally in why people light fires -- whether it's purposefully or accidentally or maliciously or recklessly -- because climate change hadn't kicked in and it really wasn't such a problem because fire could fairly easily be put out," said Stanley, who has studied arson-related wildfires for three decades.

"But because of climate change, this is not the case now. The conditions that make a fire very big and dangerous and spread quickly are now a great deal worse, so it's much harder to put out the fire once it occurs than it was in the past," she added.

"It's important to note that most of these fires have been caused by little Lucifers running around with matches and fire-starters and creating havoc," McCormack told reporters, referring to child arsonists, while acknowledging that climate change was also a factor in the fire emergency.

However, Craig Kelly, a conservative lawmaker, said some people arguing that climate change is caused by human activity "have exploited these bushfires to push their own political barrow. The climate change alarmists want to hijack the debate and use these fires as an example."

A widely circulated online image purporting to be a NASA satellite photograph shows the wildfires, which are largely confined to southern Australia, extending across the country's tropical north coast. The creator of the image, Anthony Hearsey, explained on his website that it was a digital compilation of almost eight months of NASA fire data and that not all the fires were still burning, but those qualifications were lost online.

Singer Rihanna tweeted the dramatic image to her many followers with the comment: "devastating."

Tourism Australia, a government agency tasked with promoting the country overseas, has included its own fire map on its website to counter online images suggesting much more of the country is ablaze.

Queensland University of Technology researchers Tobias Keller, an expert on the spread of political messages on social media platforms, said the involvement of celebrities are important achievements for those who overstate the problem on either side.

"When someone like Donald Trump Jr. or any celebrity endorses such a narrative, it can gain traction very quickly because everyone looks at what these celebrities post on and what their opinions are and that can be very dangerous," Keller said.

Print Headline: On social media, debate rages on bushfires' cause