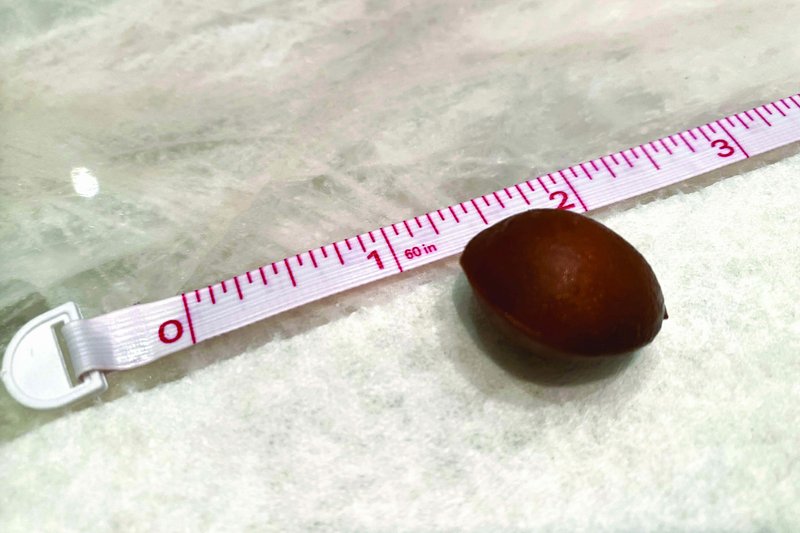 Q I was wondering if you might be able to solve a mystery. I have a dog who has eaten this object several times. I think she ate it from my yard, but I don't see any tree/bush in my yard that has this nut/pit. Sadly, my dog had to have surgery today to remove this object from her intestine. She seems to be OK after the surgery. Since I know that she has eaten this several times (with a very bad/expensive outcome the last time), I need to remove these from my yard. The object is very hard and oval with a protrusion at both long ends of the oval. Pictures show the size of it with a tape measure. Any idea of what this is?

A By any chance do you have a female ginkgo tree nearby? The seed looks like the seed without the fleshy pulp. 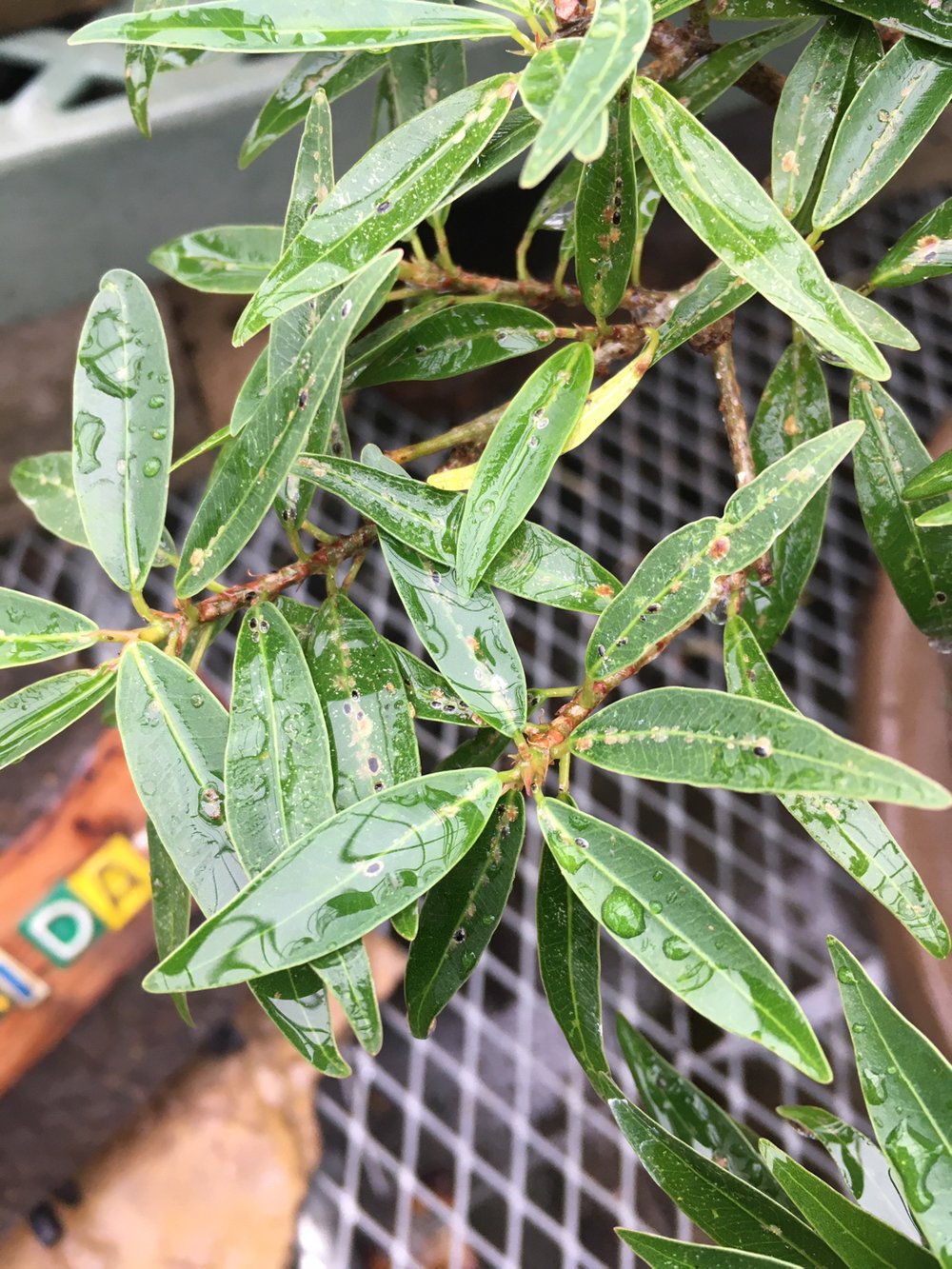 Because greenhouses get hot, horticultural oil isn't the best choice for killing scale on this ficus. (Special to the Arkansas Democrat-Gazette)

Q For the first time in 20-plus years that I have owned and cared for my prize Ficus salicifolia (formerly nerifolia) it has acquired scale on some of its leaves. As with most ficus, this tree has a white, rubbery sap that seems to have protected it from virtually all insect infestation as well as making it pretty drought tolerant. It lives inside a temperature-controlled greenhouse. On the second tree, a cut leaf maple, currently residing outside in a raised bed, I'm seeing another kind of insect (tiny white spots). Can you recommend treatments for both? 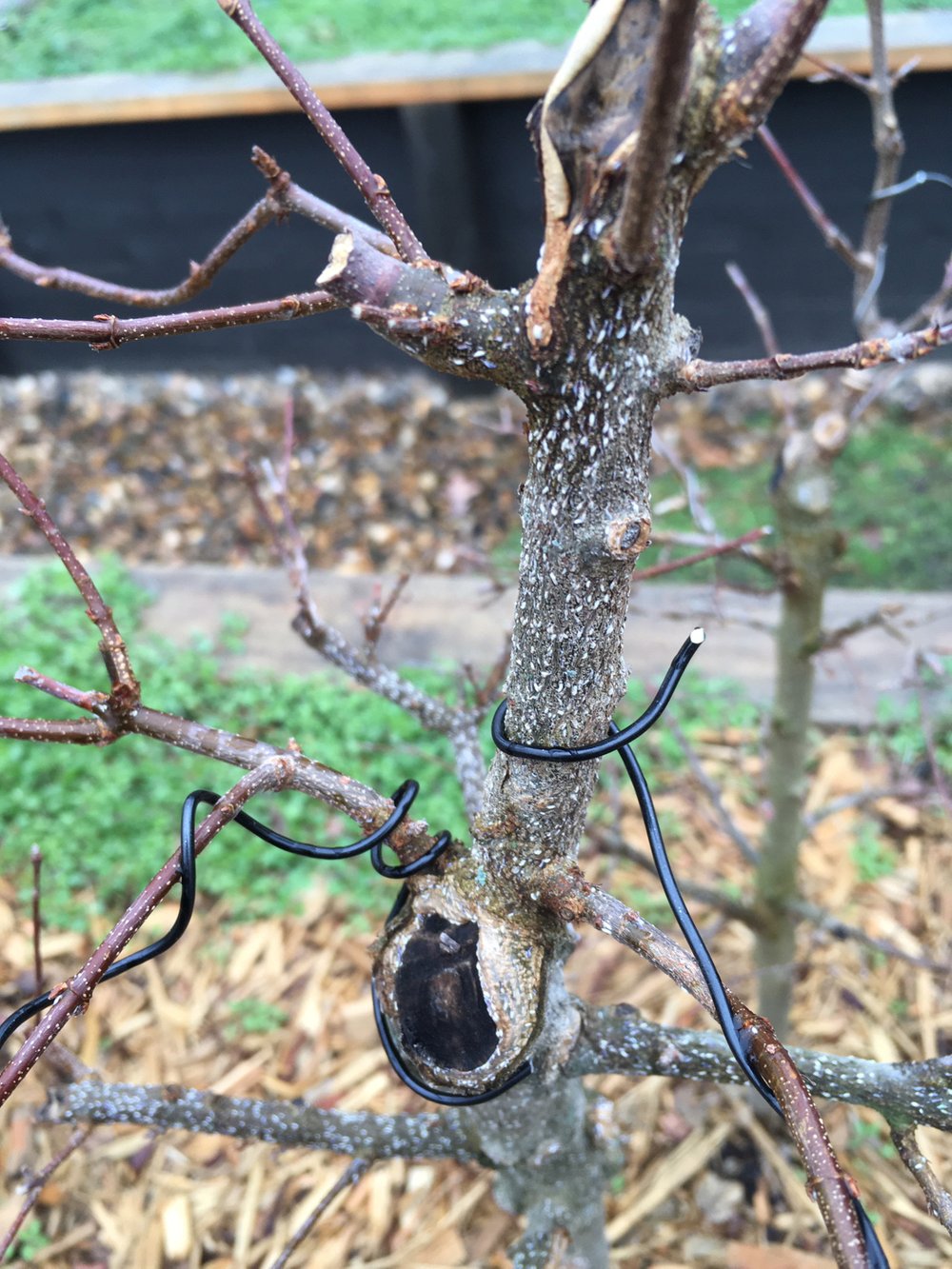 Scale insects have infested this Japanese maple. (Special to the Arkansas Democrat-Gazette)

A You do have scale on both plants. There are about 6,000 species of scale insects in the world, and while they have similar feeding habits, their outer appearance can vary tremendously. I think your Japanese maple is being attacked by a scale called Japanese maple scale. They are small, white and oyster-shaped. When you just have a few, it can blend in with variation in the bark patterns and go undetected for a while. Right now, you can use a horticultural oil or dormant oil on the maple. Saturate the stems to try to smother out as many as you can. In March or April, apply a soil drench with a product containing imidacloprid (Bayer Advanced Tree and Shrub) or dinotefuran (Ortho Tree and Shrub Control granules). Although named Japanese maple scale, it can attack camellias, hollies, magnolias and other ornamentals. For your ficus, there is a different approach. Isolate it from other plants in the greenhouse. Cut out any sections that are heavily infested and discard. You could try using a horticultural oil, but in a greenhouse, extreme heat can build up during the day and, coupled with an oil product, that can cause some sensitivity. Some people have had luck spot-spraying or dabbing the areas with rubbing alcohol, but that tends to work better for mealy bugs. There are systemic insecticides for houseplants. Bonide has a granular application, and Bayer Advanced has spikes with fertilizer and systemic insecticide. Read and follow label directions. 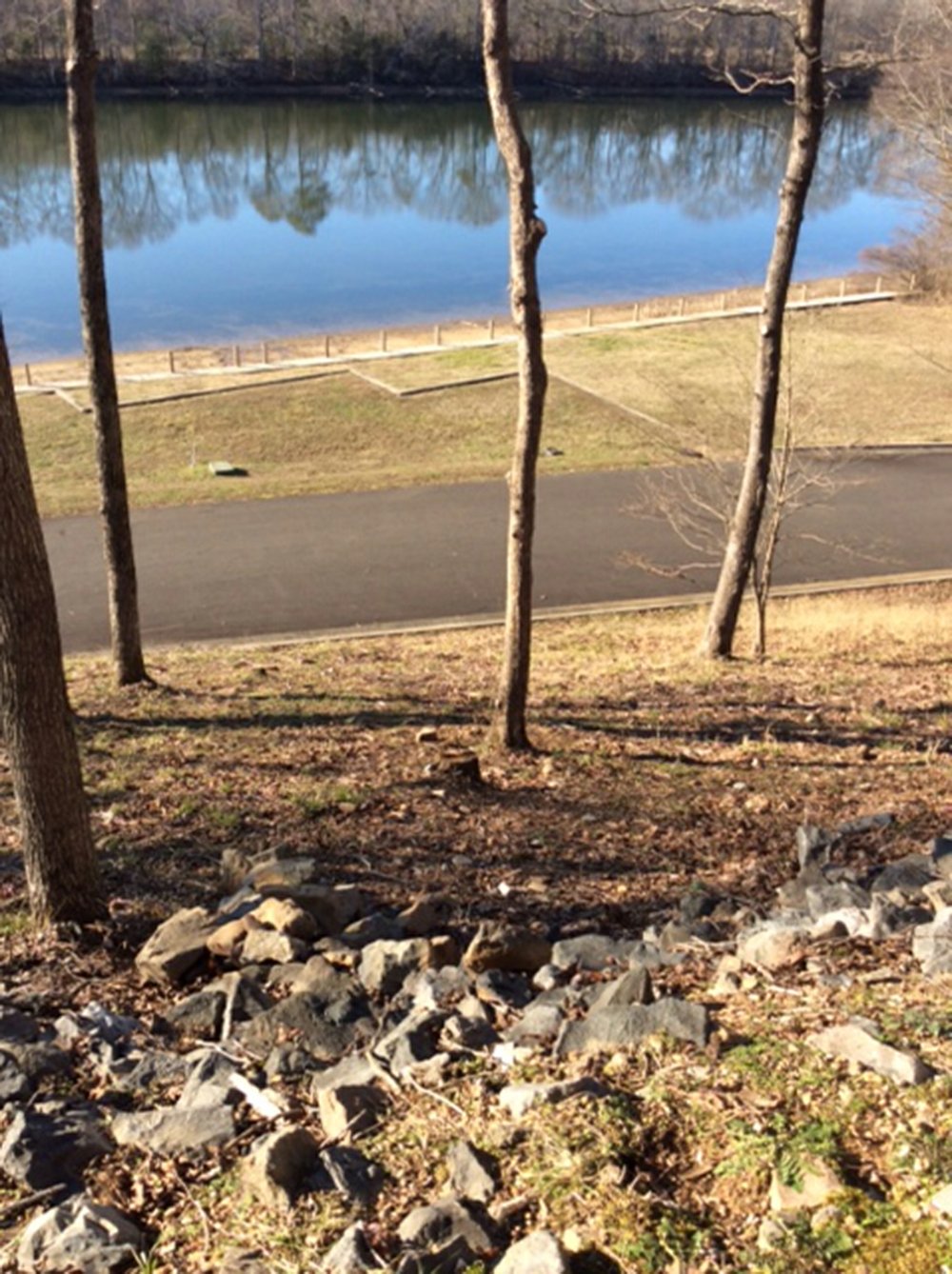 A rooting vine could slow erosion on this steep hillside. (Special to the Arkansas Democrat-Gazette)

Q I need help with the west-facing backyard. I do not need more grass to mow, plus, the incline is 45-60 degrees. We moved here in August. At Christmas, the grandchildren helped me plant 150 bulbs and will plant more. The main concern is erosion, as it is steep. At the top are (ugly) rocks I will live with for now. There is a vine/weed that needs to go. What can I replace it with? I thought about clover, but wonder if I will regret that. I love what one can get from family-, old-home places and the woods (huckleberry). Anything I do will not be formal. We enjoy our view of Lake Catherine.

A As rocky as the site is, I think you probably need some type of vine that can root as it spreads if you want to cover the area. I have seen the native Carolina jasmine (jessamine) used as a groundcover. It is evergreen and has beautiful blooms in the spring, but it can grow up the trees, too. If you think you can try to prevent that, that is an option. Clover would not be bad, nor do I think you will regret it, as it is low growing and great for bees. It needs some soil to grow in, so in the lower areas, it will work better than on the rocky parts. Sedums and thyme are two low-growing groundcovers that do well in poor soils with full sun. The bulbs can help with erosion control, and you could add some summer plants like daylilies, coneflowers and coreopsis.